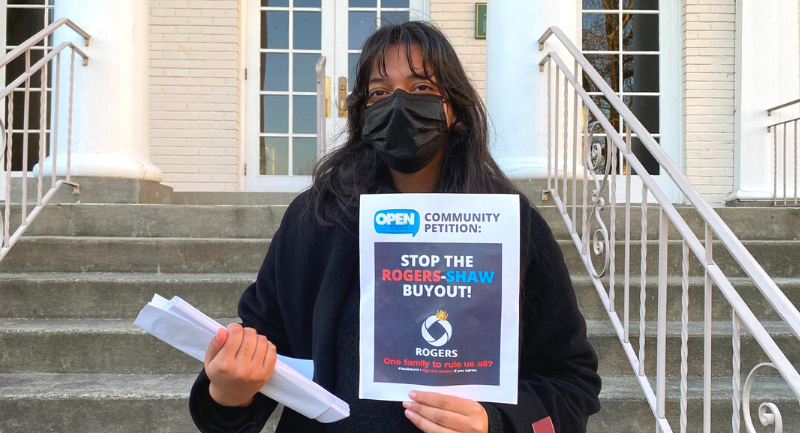 Your voice, DELIVERED: OpenMedia’s latest petition to stop Rogers from buying Shaw is in!

To date, the OpenMedia community has called on the government a whopping 34,700+ times to block Rogers-Shaw. Talk about a deafening response!

Shout out to YOU! Thanks to the hard work of the OpenMedia community, we delivered our new petition yesterday to Prime Minister Trudeau and Innovation Minister Champagne demanding the government block Rogers from buying Shaw. Click here to read our petition delivery in full.

Not only that, YOUR views made it into a vitally important bipartisan report urging the government to block Rogers-Shaw outright. More on that below!

At over 11,400 action takers strong, our submission is sure to turn heads. Close to 5,000 members of the OpenMedia community spoke out via this new petition, and nearly 6,500 sent in responses to the Competition Bureau about the individual impacts you’ll feel if the sale is approved. Both were delivered to the government in a powerful submission that pulls no punches: Rogers-Shaw must be totally blocked. No special conditions. No concessions.

This isn’t the first time your voices have made a splash with the government about this deal. In May 2021, OpenMedia delivered over 62,000 petition signatures calling on Trudeau, Minister Champagne, and the Competition Bureau to stop Rogers-Shaw in collaboration with civil society organizations ACORN Canada, Leadnow, and North99. Over 23,300 signatures within that submission were by members of the OpenMedia community, bringing the total number of OpenMedia actions taken against this buyout to a whopping 34,700+ to date! WOW!

It’s clear why this campaign has had such a deafening community response. Despite the fact that we already pay some of the highest prices in the world for home Internet and cell phone services, this buyout is poised to make prices even more expensive by reducing competition in a market already dominated by a handful of giants. We’ve published a helpful blog that explains why, but it isn’t that complicated — fewer competitors always means higher prices and fewer choices for us.

It’s heartening to see that even our elected MPs are in agreement. Last week, Canada’s Standing Committee on Industry and Technology (INDU) released a report confirming what we’ve known all along: the Rogers/Shaw buyout is not in the best interest of Canadians, and must be blocked under any circumstances.

OpenMedia’s multiple testimonies and submissions to the INDU committee on Rogers-Shaw and telecom affordability helped fundamentally shape this vitally important report. This is YOUR voice in action, having an impact! Huge!

The INDU committee should be applauded for their recommendations; they’ve rightly concluded that Rogers-Shaw should not go through. This was a bipartisan decision by our democratically-elected representatives and the closest thing we’ll get to a fair assessment of what this deal means to people in Canada.

All eyes are now on Justin Trudeau and Minister Champagne: are they going to act on the best judgement of our democratic institutions? Or are they going to ignore that judgement and cut Big Telecom a new sweetheart deal, further worsening our oligopolistic telecommunications system?

You can read our full petition delivery to Trudeau and Minister Champagne here.