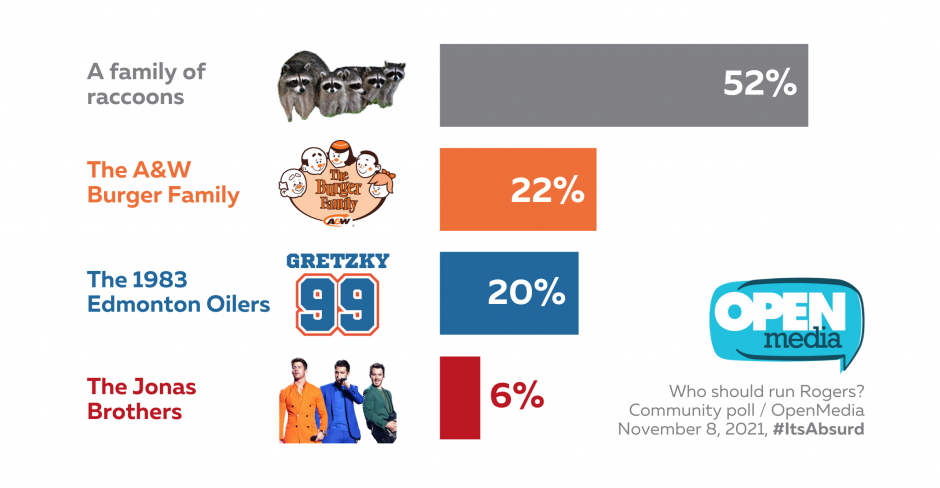 VOTE NOW! If a single telecom dynasty is going to rule us all, let’s pick a better one than the Rogers family.

The OpenMedia community is currently locked in a heated debate: Would a family of raccoons or the A&W Burger Family do a better job than the Rogers family in overseeing most of Canada’s home Internet and wireless services?

Right now, the family of raccoons have a healthy lead over the other candidates — including the Jonas Brothers and the 1983 Edmonton Oilers. But if you don’t want to be ruled by clever trash pandas, there’s still time to make your pick! Head over to OpenMedia’s Twitter or Facebook polls to cast your vote for who you think should take over from the Rogers family; because if we’re going to live with a single telecom dynasty to rule us all, we deserve a better one than Rogers.

I know what you’re thinking: absurd, right? Absolutely. But even appointing a few crafty raccoons to the Rogers board is less absurd than letting a singular, chaotic family dynasty rule over a massive portion of Canada’s home Internet and wireless services — and potentially even expanding their rule with the pending Rogers-Shaw buyout!

Just tuning in? For weeks, the Rogers dynasty has been publicly acting out a Games of Thrones-style power struggle for control of the telecom giant, the largest in Canada. Their backstabbing and infighting as members of the board have been plastered over social media and the news, in plain view of the public, shareholders, and government officials alike. Moody’s Investors Service has even labelled the Rogers governance debacle as “materially credit negative” in light of the chaos.

This kind of dangerous instability puts all of our connectivity at risk — ESPECIALLY with the Rogers-Shaw buyout still on the table. Rogers is already responsible for managing too much of Canada’s home Internet and wireless services; if they’re allowed to purchase Shaw, they will be the country’s largest provider by far. That means more power over the Internet for Rogers than any other telecom company in the country.

No single provider should have that kind of power over our connectivity, but especially not one that treats its governance like a TV drama. Edward Rogers’ victory over the independent board of directors confirms what we knew all along — this is a family empire, not regular big business, with family members continuing to hold over 90% of voting shares. Stable, affordable Internet access is too important to be used as a pawn in this family dynasty’s game. It’s up to our government to make sure that it won't be.

Even before the current family battle royale, the Rogers-Shaw sale was a gigantic threat to the future of affordable connectivity in Canada. We’ve published a helpful blog that explains why, but it isn’t that complicated — fewer competitors always means higher prices and fewer choices for us.

Canada’s Innovation Minister has the authority to block this buyout and cancel the unstable Rogers family’s plans to rule over more of our Internet — he needs to use it. Sign the petition to Minister Champagne: Stop the Rogers-Shaw deal NOW, and demand more Internet choice and affordability for people in Canada!