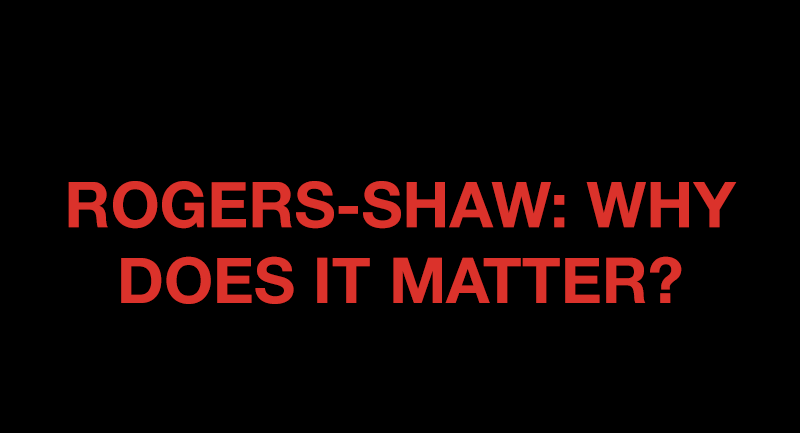 The fight against the Rogers-Shaw buyout

In Canada, study after study shows we already pay some of the highest prices in the world for Internet and wireless — we need prices to go down, not up. Canadians need a competitive market to drive down prices. This sale will do the opposite. Fewer providers in the market will lead to these services getting even MORE expensive!

The Rogers-Shaw deal will reduce the competition between our four national carriers by at least a whopping 25% — or much more, in local markets where there will now be only one major provider! That loss of competition will drive prices way up, and consumers will have significantly less choice about where they get their Internet and wireless services, especially in Western Canada.

In response to opposition from Telus and Bell, Rogers filed a response to the CRTC saying that the acquisition of Shaw will allow Rogers to compete better with Bell and Telus. But we know better: This deal will raise wireless prices in Canada and make it nearly impossible for us to achieve affordable internet rates.

Who decides if the deal moves forward?

The Canadian Radio-television and Telecommunications Commission (CRTC), Industry, Science and Economic Development Canada (ISED) and the Competition Bureau are each reviewing part of the deal. All three regulators must sign off for the agreement to proceed.

How will the sale lead to more expensive Internet and wireless?

Right now, Canada has a competition problem when it comes to Internet and cell phone data. We have just four major telecommunication companies offering wireless services, sometimes known as the “Big Four”: Bell, Rogers, Telus, and Shaw. Everyone uses these companies’ networks, including Big Telecom’s “flanker” brands like Koodoo and Virgin Mobile.

While consumers, advocates, organizations, businesses, and more are crying out for lower prices and more competition, the Rogers-Shaw deal threatens to move Canada in the opposite direction. Internet prices.

It’s economics 101: When companies have to compete for the same customers, it creates incentive to undercut each other — leading to downward pressure on prices across the board. More competition = lower prices!

It isn’t the first time we’ve seen the consequences of a Big Telecom merger play out. The Competition Bureau allowed Bell to buy out Manitoba regional provider MTS in 2017. Next thing we knew, Bell was jacking up prices. Rogers is taking out huge loans to finance this deal with every intention of following Bell’s suit.

Canadians already suffer from sky-high Internet prices. Over the years, we've seen competitor after competitor swallowed up by the Big 3. The result is always the same – more profits for the Big 3, worse plans and less choice for Canadians. This is going to be a true test of Minister Champagne’s commitment to affordability, connectivity, and Canadians.

But we can stop this deal. If enough of us speak out, we can convince the government and the Competition Bureau that Canadians cannot afford less choice and higher prices when it comes to Internet and wireless services.

What have we done, and what comes next?

In cooperation with North 99 and Acorn, OpenMedia delivered over 61,000 signatures to the Competition Bureau demanding that our government block the deal. Now we’re gathering your feedback and stories on how this acquisition will affect YOU. Are you worried about having to cut down on other monthly costs to cope with a rising internet bill? Or about other ways a loss of competition in Canada will affect your daily life? This is your last chance to be heard before the government makes their decision. Let’s keep the momentum going and say NO to telecom giants strengthening their monopoly on our market!