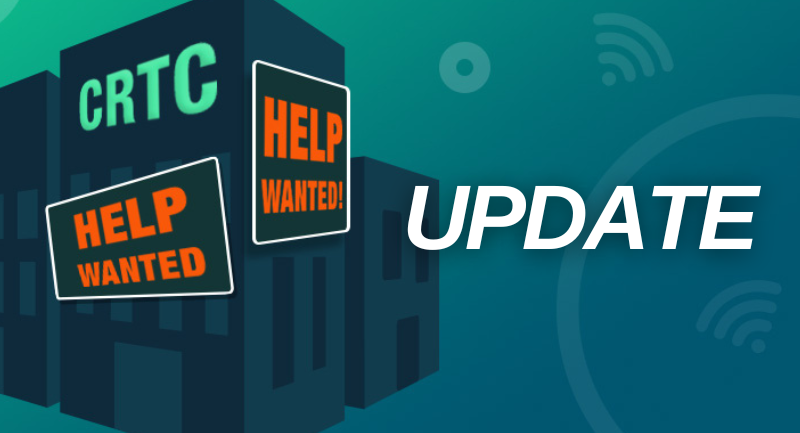 Canada’s Internet is dangerously adrift. OpenMedia’s letter to new CRTC chair Vicky Eatrides urges her to put us back on track.

Buckle up! We’re kicking off 2023 with a once-in-five-years development — one that has potential to make all the difference for your monthly Internet and cell phone bills.

This week, OpenMedia delivered a letter to Vicky Eatrides marking the beginning of her five-year term as new chair and CEO of the Canadian Radio-television and Telecommunications Commission (CRTC) — Canada’s national telecom regulator. You can read the letter in full by clicking here.

For years, the OpenMedia community has spoken up loud and clear to demand that the CRTC work for everyday people, NOT giant companies like Bell and Rogers. It’s too early to say for certain, but we’re hopeful our voices have finally been heard.

We are cautiously optimistic that Ms. Eatrides’ appointment to the CRTC will finally bring about the sweeping change to competition, affordability, and consumer choice that we’ve been waiting for. Ms. Eatrides is a lawyer specializing in competition, having worked at a senior level within the Competition Bureau where she led Competition Act enforcement. The critical eye of a pro-competition chairperson could be exactly what we need to get the CRTC to finally start making decisions that will lower your telecom bills and give you more choices of providers.

This change in leadership couldn’t be coming at a more crucial time. Under Eatrides’ predecessor Ian Scott, our CRTC has spent years making anti-consumer rulings that have directly affected YOUR ability to access affordable connectivity.

Mr. Scott’s cavalier attitude toward his cozy relationship with Big Telecom didn’t instill public confidence, either. In 2021, photos surfaced of Scott meeting alone with Bell’s CEO Mirko Bibic at an Ottawa pub. Their friendly beer took place just shortly after Bell filed its appeal of the CRTC’s 2019 wholesale rates — rates that would have promoted competition and lowered your bills. To this day, Mr. Scott maintains he did nothing wrong.

As if that weren’t enough CRTC controversy, our federal government has also been making matters worse with dangerous and ill-conceived legislation that would give the CRTC widespread jurisdiction over Canadians’ primary expressive and communicative space — the Internet. Should Bill C-11 and Bill C-18 pass, the CRTC could be charged with regulating YOUR videos, search results, podcasts, Netflix recommendations and more — and determining what quality journalism looks like, who is producing it, and how much they should be compensated for it.

With so much on the line, OpenMedia spent 2022 pushing hard for a consumer interest-minded individual to take over from Mr. Scott at the CRTC when his term was up. Through our #CRTCHelpWanted campaign, the OpenMedia community demanded our government guarantee Canada’s next CRTC chair meet 4 pro-consumer criteria:

In July 2022, OpenMedia took your voices to our government’s doorstep. We delivered over 14,000 petition signatures calling for a people’s champion to run the CRTC — someone who stands up for everyday people, NOT Big Telecom.

Did the government take our demands to heart? From where we’re standing, things look promising. The true test will come down to how Ms. Eatrides steers the CRTC during her mandate — and we’ll be following closely to make sure your needs are being met.

While what’s next for the CRTC remains to be seen, another window of opportunity just opened up to deal a MASSIVE blow to monopolies like Rogers, Ticketmaster, and Loblaws. Are you in? Click here to demand an overhaul to our Competition Act that dismantles monopolies FOR GOOD!