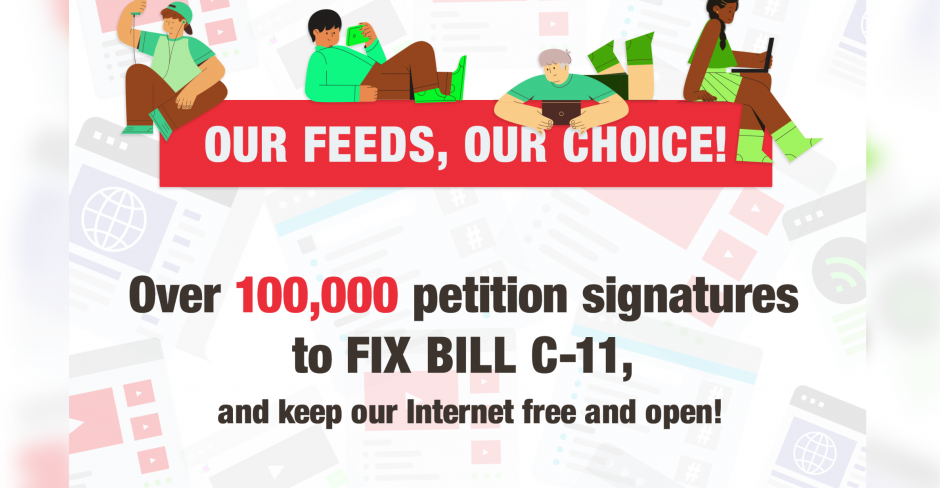 Canada’s Senate just introduced a key amendment that nips many of Bill C-11’s problems in the bud — but brought a HUGE new threat to our privacy along with it.

103,000+ community signatures. A TWO THOUSAND-page petition. ONE passionate movement to protect our feeds, content, and online choice. The power of your voice has delivered some of our biggest wins yet in the fight to fix Bill C-11 — but this battle isn’t over yet.

What fixes to C-11 are the OpenMedia community calling for?

This week, OpenMedia delivered over 103,000 community signatures to Canada’s Senate urging key amendments to Bill C-11 — AKA legislation that could STILL give the Canadian Radio-television and Telecommunications Commission (CRTC) sweeping new powers to regulate and manipulate YOUR videos, search results, podcasts, Netflix recommendations and more (check out our FAQ for more info!).

Even now, momentum shows no signs of slowing. Those petition numbers keep climbing day by day — a MASSIVE showing of opposition to the unchecked dangers of this bill.

When Bill C-11 was first passed by our MPs in our House of Commons earlier this year, it included an extremely broad set of exceptions that meant the vast majority of user content could be regulated by the CRTC. Meaning: your Netflix and YouTube favourites, the TikToks you make, and the podcasts you listen to could all be regulated as ‘broadcasting,’ subject to CRTC broadcasting rules and requirements. Your favourite content, and even your own uploads, could be systematically downranked in favour of content that the CRTC deems “Canadian enough,” according to their wildly outdated 1980s-era criteria (unsurprisingly, you'll find many of your favourite movies, YouTube channels, and TV shows don't fit the bill of what they think is "Canadian").

C-11 was then sent to the Senate for study and changes, prompting the OpenMedia community to rally around urging Senators to fix the major problems with this bill. Our demands weren’t complicated: amend Bill C-11 to respect Canadians’ choices and expression as Internet users, and do not give the CRTC the power to regulate our posts and manipulate our feeds, playlists and search results — an unjustifiable intrusion into our online lives.

Click to read our petition delivery in full. See Appendix B for a detailed look at our original proposed amendments to Bill C-11 in the Senate.

So — what happened at the Senate with Bill C-11?

Bill C-11 will receive a third vote in the Senate shortly, then head back to the House of Commons for a final vote on the Senate’s amendments. It’s CRITICAL that our MPs take two very important steps: defend the Senate’s good amendments protecting user-generated content from the bill, and reject the inappropriate, privacy-violating, and undemocratic addition of an age verification requirement.

On board? Email your MP here!