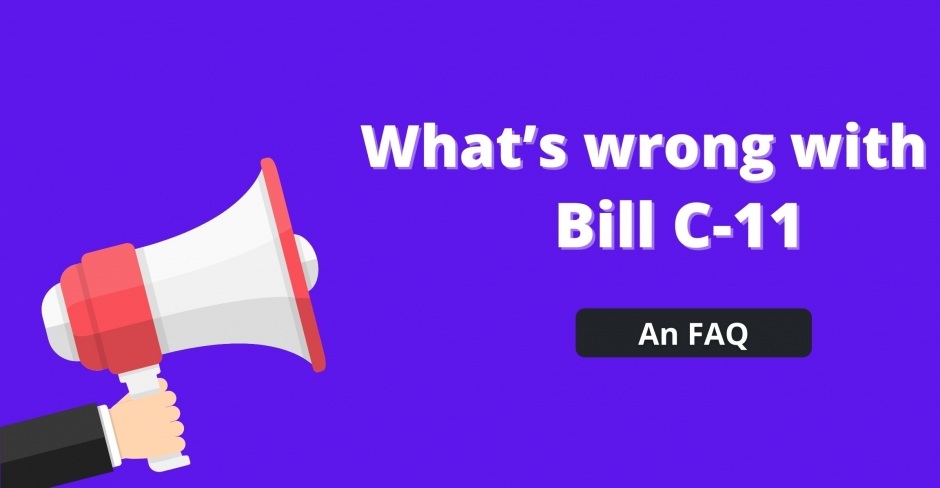 Canada’s House of Commons has passed Bill C-11, the Online Streaming Act – and the Senate is in the last stages of considering it before it becomes law. If you’re like a lot of people in Canada, you have questions about what this controversial bill will mean. How will it change your feeds and playlists on popular online platforms? Could it give the CRTC the power to regulate your personal posts? Below we answer these questions and more about what C-11 does and does not do. Bill C-11 is not the law in Canada yet, but there are just days left to speak out if you have concerns about it.

Will Bill C-11 give the CRTC the power to regulate your posts?

How will Bill C-11 affect the content you see online?

How will Bill C-11 affect small and digital-first Canadian creators?

Who is Bill C-11 actually for?

Will Bill C-11 give the CRTC the power to regulate your posts?

How will Bill C-11 affect the content you see online?

But wait - doesn’t Bill C-11 ban the CRTC from forcing an algorithm on us?

Yes, but it doesn’t really matter. Under Section 9.1(8)  of Bill C-11, the government bars the CRTC from explicitly requiring platforms to use a particular algorithm or source code to construct their feeds.

But the CRTC is requiring outcomes, and manipulating algorithms is the only way to achieve the government's requirement to promote official CanCon content first – CRTC chair Ian Scott has confirmed this during testimony. The CRTC will decide what our experience on platforms should look like, and it will be up to the platforms to decide how they will manipulate our feeds to get it done. In other words, if it looks like a duck, quacks like a duck, it's an (algorithm manipulating) duck.

How will Bill C-11 affect small and digital-first Canadian creators?

It’s worth remembering that Canadian digital creators are telling our cultural stories on new non-broadcast Internet platforms every day. As such, they should be equal recipients of any dedicated Canadian storytelling funding, but excluded from top-down broadcasting standards regulation. Bill C-11 does the opposite: applying outdated broadcasting standards and financial regulations to their work, without updating CanCon to support them financially.

Who is Bill C-11 actually for?

The real motive of the Online Streaming Act is simple; streaming platforms and creators on them are bringing in more and more revenue, and legacy media wants a piece of the pie. Legacy broadcasting media companies like Bell Media, Rogers and Corus Entertainment, have built themselves a comfortable and oligopolistic domestic market in Canada during the broadcasting era and dominated the media landscape for many decades. But the old narrow system isn’t working anymore. Television broadcast revenue has been in decline since 2014; young people don’t use cable TV or listen to radio. Rather than building competing online services on terms that attract people, those legacy media giants want a cut of the profits from streaming services that are increasingly popular in the 21st-century media market. Let’s take a quick trip through how the current system works, and how Bill C-11 will change it.

No – it will permanently tilt an already uneven playing field towards legacy media. Legacy media like Bell and Corus have a two-sided relationship with CanCon requirements and the Canada Media Fund (CMF); they have obligations and must pay into it, but they also draw on CMF funding.

The government will expand payment obligations to a huge variety of online platforms, without granting them rights to draw on the CMF. The scope set out in an early government memo on C-11’s predecessor indicated a wide variety of niche and mainstream platforms they would target, from podcasts, sports services, video, etc. Meaning that the smaller streaming services you love, like BritBox, Pocket Casts, SportsNet Now, would all be subject to CRTC regulation, and potentially forced to figure out how to meet obligations to carry CanCon. As Bill C-11 was handed to the Senate, there is no Canadian revenue threshold or other limitation excluding some platforms from regulation - anyone and everyone could be included.

Smaller streaming services that aren’t able or willing to create CanCon-mandated content or pay into the CMF may choose to exclude themselves from the Canadian market altogether, blocking us from even accessing their content.  This would be a tremendous loss to Canadians looking for specialty programming, or diasporic communities in Canada looking for content from their home country.

Bill C-11 starts from a fundamentally flawed view of the Internet and can’t be wholly separated from it. The Internet is simply nothing like a traditional broadcasting platform; we as users have many more options and choices, and heavy-handed government interference doesn’t belong. Our government should be respecting and enhancing that autonomy, not making decisions about the content we get to see and hear.

We believe the approach most in the public interest would be going back to the drawing board and writing new Internet-specific legislation that is not built on Canada’s outdated Broadcasting Act, and does not further empower an increasingly outdated CRTC.

However, if the government can’t be dissuaded from cramming the whole Internet into a broadcast framework, four crucial changes will reduce Bill C-11’s potential harm:

Promoting Canadian content and telling our stories is a worthy objective of government policy: but only if it respects our choices and supports all Canadian storytellers equally.

Looking to make an impact on this Bill? You can speak up and be heard with OpenMedia. Sign our petition to the Senate to demand they fix Bill C-11! #FixC11