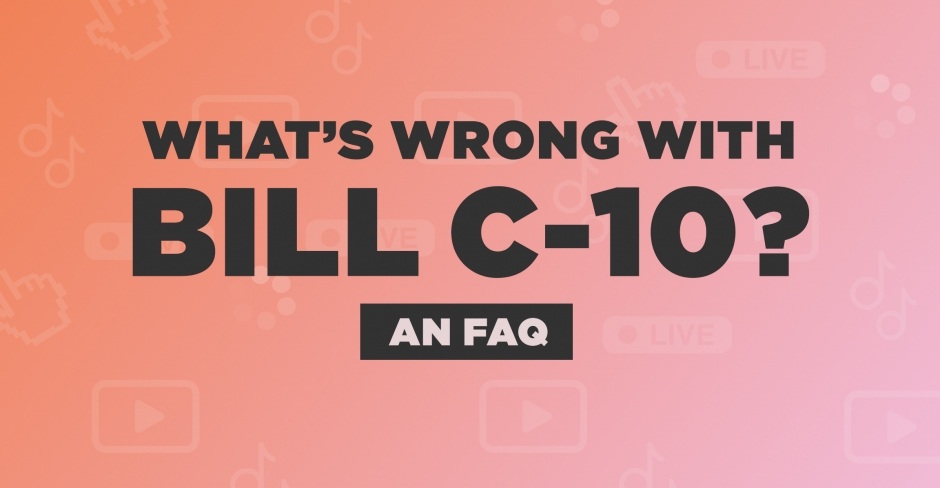 2. Is Bill C-10 about helping small and diverse content creators in Canada “tell our stories”?

No, though the government would like you to think it is. In public, Heritage Minister Steven Guilbeault is telling Canadians that C-10 is all about the need for Canada to ‘tell our stories’ in the 21st century.

If telling our stories on new media is C-10’s top priority, you might expect it would start with a bold vision for how the government will rebuild its systems that fund Canadian storytelling to focus on all the new media platforms that make the modern Internet great, including the podcasts, Patreon accounts and Youtube channels which many younger Canadians flock to over traditional broadcast. A top priority would also be updating our wildly out of date 1980s era CanCon points definition system that governs which stories get funding today, to make sure that it meaningfully reflects both emerging and historically underrepresented forms of Canadian identity with specific financial commitments.

Sadly, that’s not the case. C-10 has no vision for reaching younger Canadian audiences, nor means to support our storytelling on the user and independent creator driven Internet. It promises to exclude user-generated content from legislation - more on why that may not wholly work below - but that’s where the government’s vision stops.

What about broadening our story-telling to reflect more of Canada’s diversity?

There’s some rhetorical progress in the bill, which amends the current Broadcasting Act by calling for the “needs and interests of all Canadians” to receive some support, including “Canadians from racialized communities and Canadians of diverse ethnocultural backgrounds, socio-economic statuses, abilities and disabilities, sexual orientations, gender identities and expressions.”

Yet despite this promising start, C-10 doesn’t actually turn these good intentions into meaningful policy or funding. Supporting more diverse storytelling isn’t possible without first updating the definitions the government uses to decide what counts as ‘Canadian’ content — currently determined by a points system last updated in 1984. That CanCon system produces absurdities like funding documentaries on the Kennedys and English Tudors as official CanCon, while broadcasts of iconic Canadian creator stories such as Margaret Atwood’s “The Handmaid’s Tale” don’t quality. This bill does not even start to revise the CanCon system – the brunt of that work will be left to the CRTC, and take years to complete.

So until that definition is radically revised, CanCon status remains far more about supporting one flavour of content made in Canada, not Canadian storytelling.

Canadian storytellers not supported by the current CanCon system won’t see a dime from C-10 for many years (if ever) – and truly Internet-based creators on new media platforms may never qualify.

So if Bill C-10 doesn’t support new storytelling, why is Minister Guilbeault in such a rush to regulate streaming companies?

In short: It’s a fast cash-grab for traditional broadcast industries.

Rather than being about “telling Canadian stories,” as Minister Guilbeault is telling us, Bill C-10 is driven by much a cruder vision – that major streaming platforms are earning a lot of revenue, and legacy Canadian media companies want a piece of it.

Companies like Bell Media and Corus Entertainment built their businesses around TV, not the Internet, and would much rather the Internet look like cable than adapt what they do to the modern web.

There’s no crisis for funding for their broadcasts that qualify as traditional CanCon, which reached a several year peak in 2018 and has remained stable over the last 10 years. But overall revenue from television broadcast has been declining for these companies since 2014 – people are less and less inclined to pay for their overpriced, overstuffed cable packages.

But streaming companies like Netflix are currently ineligible to receive Canada Media Fund funding, even when they’re producing what would otherwise be Canadian content by the current points system, using Canadian production teams and creators. And that means a golden opportunity for legacy television companies to have the government force popular streaming competitors to fund their less popular content!

No – just the opposite. Under the current system, legacy broadcast companies pay into the CMF, and are eligible for hundreds of millions of dollars in funding back, as well as benefiting from a wide range of commercial rights and protections within the broadcast market that foreign or streaming only companies cannot access.

Under C-10, if streaming companies are asked to pay into the CMF, they will be ineligible for funding back – taking from streaming services to subsidize legacy broadcast production.

That’s tilting the playing field towards legacy media companies, not levelling it, and it is why they’re so keen on it that Bell’s CEO Mirko Bibic infamously ‘tipped his hat’ to Guilbeault on Twitter shortly after C-10’s introduction.

5. So what would Bill C-10 mean for our favourite streaming platforms?

Higher prices, much less of the content we love, and the potential for some streaming services to leave Canada.

We don’t know how individual streaming platforms will respond to C-10, or exactly how the CRTC will apply its regulatory powers. But any platform paying into the CMF without receiving support back will most likely take that money back in higher Canadian subscription fees, not cutting their margin below that in other countries. And what’s the simplest way of accommodating CanCon content quotas? Not producing tons of new CanCon content - it would be blocking a whole lot of our favourite streaming content in Canada, so CanCon takes up a larger share of what’s left.

C-10 could also mean some streaming services pull out of Canada entirely, or never come here in the first place. Any platform unsure where they stand under C-10 and unwilling to deal with the hassle of the CRTC’s process could block their service in Canada rather than pursue a comparatively expensive and over-regulated market.

Not clearly or cleanly. Minister Guilbeault has promised the public that the Act will not be extended to any but the largest streaming platforms, and will not affect user-generated content.

But that’s not what the bill actually says. As written, only streaming platforms the CRTC specifically excludes at their discretion will be exempted from regulation and levies. Any small streaming platform that wants to serve people in Canada will need to contact the CRTC and seek a judgment on whether they can be excluded, or risk facing legal consequences. Platforms who are unsure of their status and don’t want to enter a potentially multi-year CRTC process could easily decide to block their service in Canada altogether.

It’s impossible for us to know what the CRTC thinks should or shouldn’t count – or if that opinion won’t change over time.

And even if individual user content and the platforms that host it are excluded by the act, most platforms that host user content could still be affected. Modern streaming platforms like Youtube and Spotify increasingly contain a mix of user-generated, sponsored and platform-commissioned content, which will bring them into the Act’s purview and significantly change how they serve Canadian users and creators.

7. Is Bill C-10 about applying sales tax to streaming companies?

No. The government has separately proposed applying sales tax to streaming platforms, which is a simple loophole closing that does genuinely level the playing field, and is supported by both OpenMedia and many concerned academic experts – we’ve written more on the subject here.

8. If Bill C-10 is a bad idea, what should our government do instead?

We believe the government should slow down and take seriously their promise to help us tell Canadian stories. Given that the financial crisis for our funding for Canadian stories supposedly driving C-10’s haste just doesn’t exist, we need to hit pause NOW, and make sure that the reforms we’re building are truly about supporting innovative, culturally diverse Canadian content everywhere on the Internet.