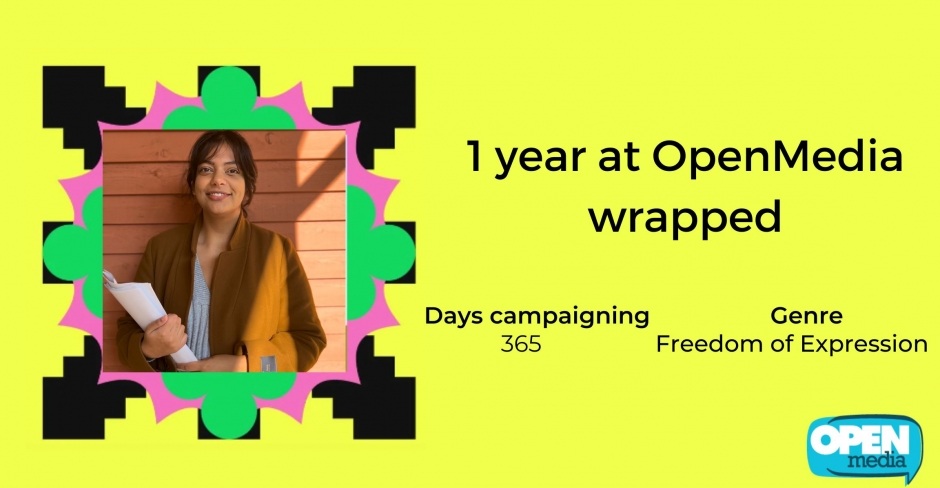 My one year at OpenMedia wrapped

Our Freedom of Expression campaigner wrapped up her first year at OpenMedia; here are her main takeaways.

I’m Ramneet, and I’m the Freedom of Expression Campaigner at OpenMedia. I’m coming up on my first anniversary at OpenMedia and I want to share some insights with you about what my experience has been like. When I started a year ago, I wasn’t sure what to expect, but it quickly became clear that OpenMedia was going to be different from my previous jobs.

At OpenMedia, we’re a pretty small team. Still, we’re scrappy, and every single member of our team is instrumental in helping to achieve our mandate of keeping the Internet accessible, open, and surveillance-free. Typically, you’ll receive emails from one of our Campaign leads (Erin from Access, Bryan from Privacy, Matt our Campaigns Director, or myself). While the Campaigners typically lead their pillar work, everyone pitches in to collaborate and meet the needs of our community. Whether it's Dylan, our Development Coordinator, editing a video for our social media, Rosa, our Communications Manager drafting a late-night press release, or Shantini, our Operations Director, organizing an event from top to bottom, everyone is open to working together and encouraging others to get creative and think outside the box.

This year, I’ve had the opportunity to collaborate with strategic, creative, and intelligent experts, industry leaders, and civil society organizations that OpenMedia works alongside. I’ve been a sponge this year absorbing all their knowledge, from brainstorming new ideas for an upcoming campaign, problem-solving complex briefs, sharing thoughts on a new proposal, or pitching a new stunt we can bring to policy-makers. The core of our operation is partnerships with these high-skilled experts and activists. They guide us in bringing to you the issues that impact you the most.

One thing our community might not typically see is the behind-the-scenes at OpenMedia. We’re constantly keeping up to date on the latest announcements, sharing the most relevant news, meeting tight deadlines, working with government staff, and engaging with academics and peers. On any given day, I could be writing a new campaign, drafting a submission to policymakers, or making a cheeky meme. Working at OpenMedia isn’t your typical 9-5; it's spontaneous, creative, and sometimes gets your adrenaline pumping — in the best way!

During my first few months at OpenMedia, I quickly realized what it means to be a part of the OpenMedia community. It's a group 300,000+ strong of experts that help us analyze digital rights and polices, campaigners that help bridge the gap between awareness and understanding, and supporters who understand the importance of digital rights in their lives and take action to fight for their needs. At the end of the day, it all comes down to our base of ordinary people across the country. Your support keeps us moving forward to build a better Internet. Every time you sign one of our actions, that amplifies our message and leads to positive change for the better. Every message you send us, we read and reflect on. We’re on this journey together!

Because of your support, you’ve made my first year a successful one. Here are some of our  biggest freedom of expression achievements:

So…what's my takeaway? OpenMedia is doing unique and impactful things to keep the Internet open. We’re not just fighting off the world you don’t want, but brick-by-brick building the one you DO want. I’m honoured to be playing my part in building a better and safer Internet for all. Cheers to an amazing first year, and onto year 2!