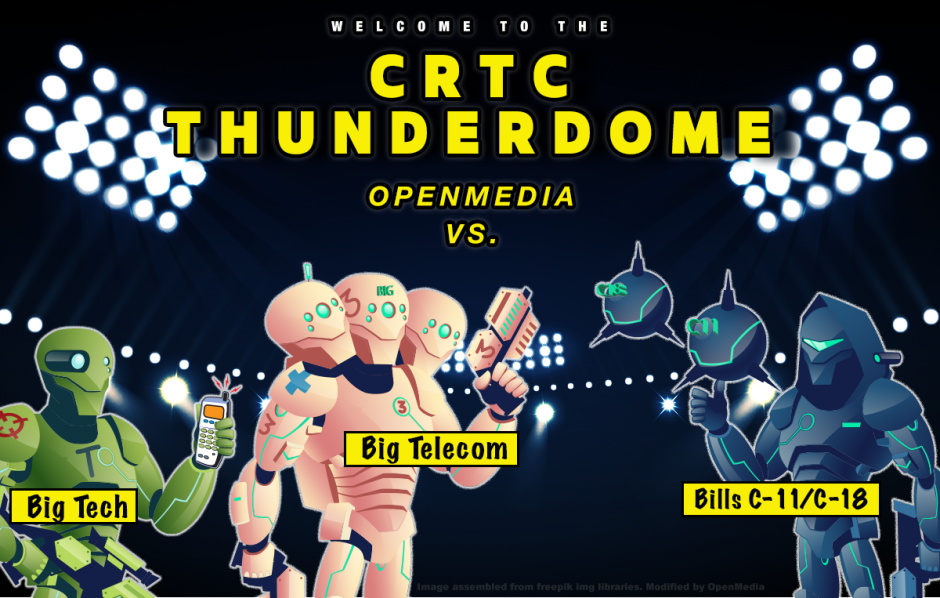 What is the CRTC? And why should I care?

Laying out what the CRTC is and how it affects the daily life of Canadians.

Can't figure out why we keep talking about the CRTC? This FAQ is for you!

What is the CRTC?

The Canadian Radio-television and Telecommunications Commission (CRTC) is an independent public authority that creates and enforces rules that govern Canada’s radio, television, and telecom sectors. Those rules affect what you do and don’t see on TV, hear on the radio, and the price and accessibility of your phone and internet services.

The CRTC is run by commissioners, including a chairperson, who are appointed by Cabinet — specifically the Heritage Minister. Right now, that’s Pablo Rodriquez.

How does it affect me?

The decisions the CRTC makes directly impact the price of your Internet and phone bills and your ability to access high-quality and affordable services. They have the power to affect the Canadian telecom market and how different companies interact in the industry. In recent years, this power has been used largely in favour of giant companies like Bell, Telus, and Rogers — leaving smaller competitors who offer more affordable rates harder for regular people to access.

What is the CRTC Battle Fund and why is it so important?

As the CRTC is given more and more power over Canada’s Internet, we need to hold them accountable to ensure they act on YOUR behalf instead of in the interests of corporate giants. The CRTC Battle Fund is the key tool that will give OpenMedia the fuel needed to push forward campaigns, stunts, and research in the time between proceedings, allowing us to keep up with Big Telecom and legacy media lobbyists backed by the deep pockets they gain from overcharging you. Help us fight for a CRTC that works for YOU.

Why is the CRTC currently in the news?

Why does the CRTC’s connection to Big Telecom matter?

The CRTC makes decisions that impact your access to affordable, high-quality Internet.  And yet, the folks in charge often have close ties to the biggest corporate bullies in the telecom industry.

Big Telecom lobbyists met with the CRTC on average two times a week over a calendar year from 2020 to 2021, often meeting with chair Ian Scott directly, while smaller players like Teksavvy and Distributel weren’t given the same kind of access.

Current chair Ian Scott has a demonstrated deep personal connection with Big Telecom as a former Vice President of Telus, as well as in the lobbying field as a registered lobbyist for satellite company Telesat. His capture by Big Telecom’s interests is perhaps best illustrated by his 1:1 lobbying meeting with the CEO of Bell over beers at an Ottawa pub. This was right around the time that Bell was putting in an appeal for a key CRTC decision on wholesale rates — a decision that later went in Bell’s favour.

A CRTC in the pocket of anti-competition, anti-affordability corporate giants is far more likely to uphold our unfair telecom system, keeping our prices high. We need small players to challenge Internet and cell phone price gouging and compete to provide us with better service, but that’s the last thing that Big Telecom wants the CRTC to do.

Does the CRTC regulate my content/data?

Not yet, but they could soon. Like the disastrous Bill C-10, Bill C-11 would give the CRTC unprecedented regulatory authority to monitor all online audiovisual content. This power would extend to penalizing content creators and platforms that fail to comply. This proposed legislation also gives the CRTC power to regulate and alter the content you would see in your feeds.

How can we change the CRTC? Is real change possible?

Real change is possible, and OpenMedia is working daily to make this change happen.

The first step is putting someone in charge of the commission who stands for the people instead of the interests of Big Telecom.

And on May 26, our federal government announced a new policy direction for the CRTC, alongside an open consultation for ordinary folks, industry, and experts to weigh in before it goes into effect. Until July 19, our government has a consultation open regarding this policy direction. They are seeking the voices of ordinary folks like YOU.
We are at a critical point right now for these two pieces to align — and FIX what’s broken at the CRTC.

What is OpenMedia doing about this?

OpenMedia is tirelessly campaigning, listening, and testifying at government proceedings to ensure the government hears your voice and concerns about an affordable, accessible, and open Internet. There are many more battles on the horizon that we are gearing up for — which is why we need your help.