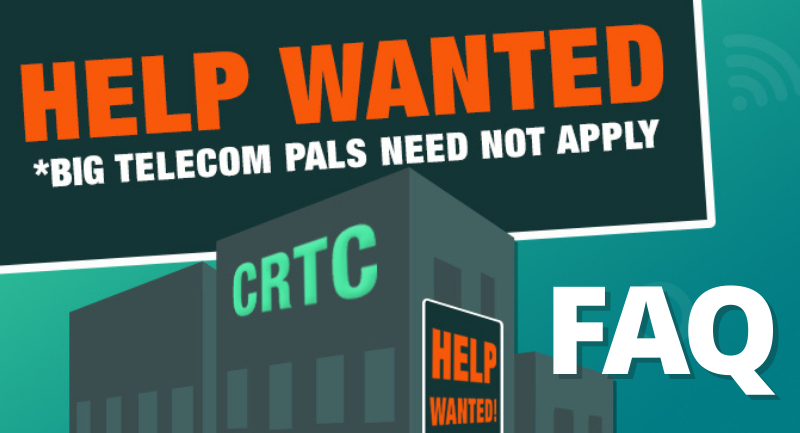 FAQ: Why it’s crucial Canada’s next CRTC Chair be a champion for the people’s Internet

This is our once-in-5-years shot to appoint a CRTC Chair who stands up for the people, NOT Big Telecom.

Ian Scott, former Telus executive and self-described “personal friend” of Bell’s CEO, has spent years as CRTC Chair denying Canadians every opportunity for greater Internet & cell phone competition and choice. Time and again, his CRTC has issued rulings that have propped up Big Telecom and directly led to higher connectivity prices in Canada, already some of the most expensive in the WORLD.

Fighting Big Telecom's unfair dominance is hard enough without having one of their guys in charge of Canada's national telecom regulator. But what if we flipped the script?

Ian Scott's term ends in September. This is our once-in-5-years chance to get a CRTC chair who works for us. Appointing a public interest champion — someone who stands for the PEOPLE’S Internet, not Big Telecom — as chair would be transformative for getting affordable, high-quality Internet in the hands of every person in Canada.

That’s why we’re demanding Trudeau and Cabinet publicly guarantee our next CRTC Chair will meet these 4 key criteria:

Why are we talking about this now?

Competition and choice is shrinking in Canada’s telecom market, and we need to fight back. On February 24, Bell announced that it had gobbled up yet another small Internet provider, this time in Quebec. It’s just one example of how the CRTC’s onslaught of anti-consumer decisions under Ian Scott are crushing smaller competitors — and serving more and more unwilling customers up to Big Telecom on a silver platter.

Enough is enough. Ian Scott’s term as CRTC Chair is up in September, and the process to replace him starts soon. That’s why it’s absolutely critical that we are loud NOW as candidates are lined up, and fight tooth and nail NOW to make sure the next Chair stands up for the best interests of people in Canada — NOT Big Telecom.

If your cell phone and Internet bill is still unaffordable in 2022, you can give some thanks to Ian Scott for bringing his cozy relationship with telecom giants to the decision-making table at the CRTC.

Ian Scott is a former executive of Telus, one of the “Big Three” telecom giants in Canada. When he was appointed Chair of the CRTC — the regulator that’s meant to reign in telecom companies — he stayed as close as ever with his industry buddies. In 2021, news broke that Scott had been caught having beers at an Ottawa pub with Bell’s CEO Mirko Bibic. For more on that saga, check out our blog.

How does Big Telecom’s capture of the CRTC affect me?

When the CRTC Chair is BFFs with the corporate giants they’re meant to regulate, it is fair to worry they’re making decisions that benefit their besties — and hurt Canadians.

Case in point: Chair Ian Scott’s beer with Bell’s CEO happened just weeks after Bell filed an appeal of an important CRTC decision, one that resulted from years of work by CRTC staff and would have led to lower Internet prices in Canada. Surprise, surprise — the CRTC threw their own numbers out, and Bell got their way.

Big Telecom’s domination of our cell phone and Internet markets is one of the biggest reasons why people in Canada pay some of the highest prices in the world for connectivity. With only a handful of providers for us to choose from, telecom giants can get away with charging an arm and a leg for the basic connectivity services we all need.

The equation isn’t that complicated: to make our connectivity bills more affordable, we need more independent competitors and choice of providers in the market.

More players in the game forces companies to compete on pricing, service, and innovation — and that’s good for everyday people. To deal with the systemic problems that enable Bell, Rogers, Telus to run their oligopolies and keep prices unaffordable, we need the CRTC to create regulations that reign Big Telecom in and help small providers compete on pricing and services enjoyed by everyday people.

What are some of Ian Scott’s most anti-consumer, pro-Big Telecom decisions as CRTC Chair?

What must Trudeau and our Cabinet Ministers do?

After years of corporate capture of our nation’s telecom regulator under Ian Scott’s leadership, it’s high time Canada had a people’s advocate at the helm of the CRTC — one that will actually stand up to Big Telecom.

Our petition lays out the basic characteristics that Cabinet should look for in our next CRTC Chair. We need someone who understands personally what it is like to pay our Big Telecom overlords some of the highest prices in the world for cell phone and Internet services, and has a proven track record of fighting for the little guy and for ordinary Canadians.

If we don’t speak up right now, Trudeau and Cabinet will do what they always do: quietly let Big Telecom rig the game against everyday people in Canada. We CANNOT let that happen. Sign the petition NOW to hold our Cabinet Ministers accountable: Commit to appointing a champion for the people’s Internet as our next CRTC Chair!