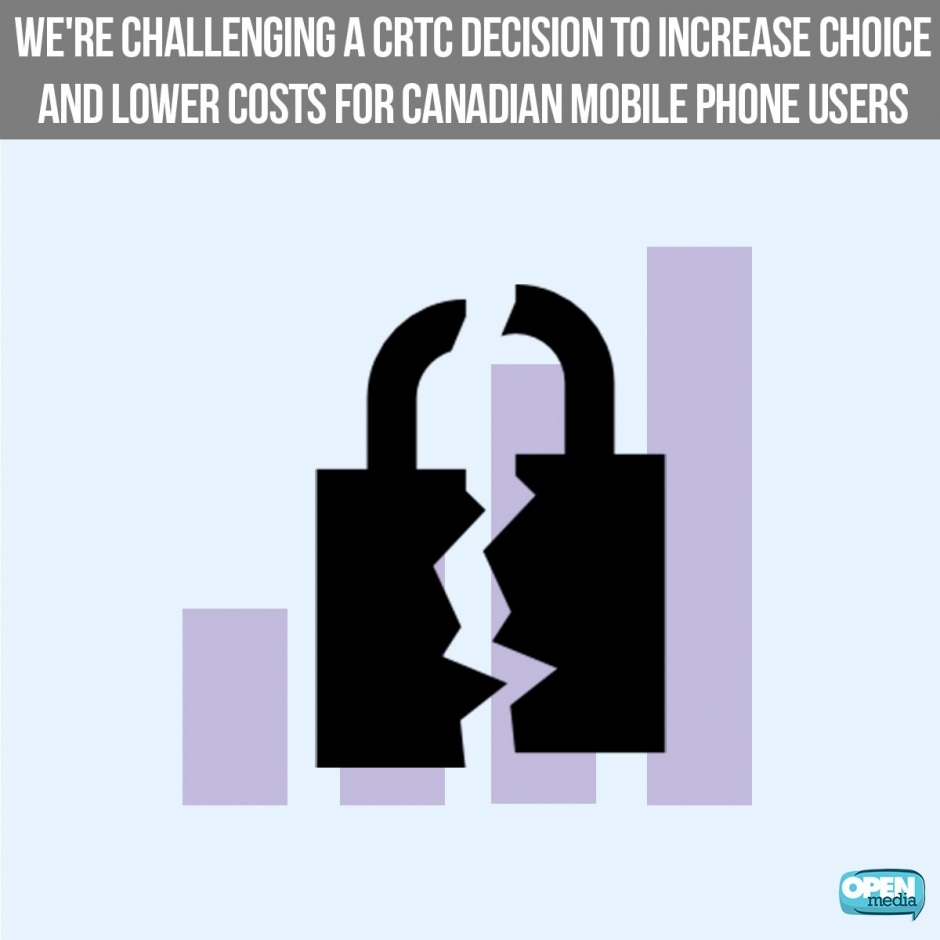 We’re challenging a crucial CRTC decision on behalf of Canadians

Last night, OpenMedia filed detailed and significant comments in support of a crucial challenge that will determine whether Canadians get access to new, independent wireless providers like Ting. If the Canadian Radio-Television and Telecommunications Commission (CRTC) listens to Canadians, bad parts of a recent ruling will be overturned and a new level playing field will allow a wide range of new mobile providers to set up shop and sell services to Canadians. Back in May, the CRTC took a significant step towards ensuring Canadians have access to more affordable options in our mobile phone and Internet market.

The decision ensured that new wireless providers such as WIND Mobile had fair access to infrastructure controlled by the Big Three. The move promised to drive down costs and even out coverage across the country – ensuring more Canadians have access to a fourth mobile player in the long run.

Now, there’s no doubt that this was a positive step, especially since the Big Three control over 90% of the market and force Canadians to pay some of the highest prices in the industrialized for what’s widely recognized as poor service.

But there was a bit of a catch in the CRTC’s ruling. While their final decision recognized the immense power of Canada’s vertically-integrated telecom giants, and noted that the state of choice and affordability in Canada’s mobile phone market was far from ideal, they didn’t go far enough to help rectify our dysfunctional – and very expensive – mobile phone market.

Reacting to the decision at the time, the team here at OpenMedia, experts like Professor Michael Geist, and many in the media, noted that the decision could have created an additional set of fair open access rules that would have ensured all Canadians – especially those living in areas not served by new national providers like WIND, or regional providers such as SaskTel or MTS – were able to access options outside the Big Three.

You see, our disappointment stemmed from the Commission’s decision not to ensure fair, cost-based open access rules for a different type of provider – rules that would ensure indie providers like Ting, Raven Wireless, or Google Fi could also make use of key digital infrastructure held hostage by Canada’s Big Three. (In case the name Ting is ringing any bells, you may recall that they’re the hugely popular Canadian service that Canadians can’t use).

These providers are a bit different than companies like WIND Mobile, who benefited from the CRTC’s original ruling. Instead, they’re what’s known as “mobile virtual network operators”, or MVNOs. And even though they’ve gone on the record numerous times saying that they really really want to set up shop in Canada, and are each willing to invest tens of millions of dollars in our digital infrastructure, they can’t because they’re being blocked from key infrastructure by the Big Three who desire total control of our wireless market.

Creating fair open access rules allowing MVNOs to set up shop in Canada would provide innovation, investment, and greater choice and affordability in a market much in need of these benefits. Failing to let them in on fair terms ensures Canadians across the nation will be deprived of access to a full range of affordable, independent options for mobile phone and Internet services – a development crucial if we're to finally lower our sky high wireless prices.

In response, your OpenMedia filed detailed and substantive comments supporting an important challenge to the CRTC, asking them to reconsider their decision not to ensure fair open access rules for affordable MVNO providers.

With the help of one of our trusted advisers and community members, Ben Klass, we forcefully demonstrated that they made significant errors in their decision-making process, which caused them to lose sight of an important goal – serving Canadians.

As we have argued in other key government hearings – including the recent landmark decision we won on the future of indie ISPs – the goal of the CRTC should be to provide Canadians with affordable, independent, and innovative options for telecommunications services in a decentralized marketplace. This is what Canadians have asked for, and failing to make decisions that serve this will only frustrate us, and allow telecom giants to dominate our market.

For those who are interested, you can read our detailed comments in this PDF or below, but for those in a hurry, here’s the TL;DR:

At the end of the day, we want to ensure Canadians have access to the world-class wireless phone and Internet services that they deserve. There’s no doubt that the CRTC’s creation of a level playing field for operators like WIND Mobile was a step in the right direction, but they could have gone significantly further. That’s why we joined this legal challenge.

With our arguments freshly filed and forcefully argued, the CRTC is in a great position to ensure Canadians get access to new providers. The question is: Will they listen to Canadians leading this challenge? Or will they cave to Big Telecom providers who want total control and high prices for all of us? As community member Kyle Hewitt points out on Facebook, creating a level playing field for new options is a crucial next step:

Look for options, third party providers do exist, and usually cost way less for the same or better services. Vote with your money and they will listen.

We’ll keep you posted as we learn more. In the meantime, you can see our detailed comments below.