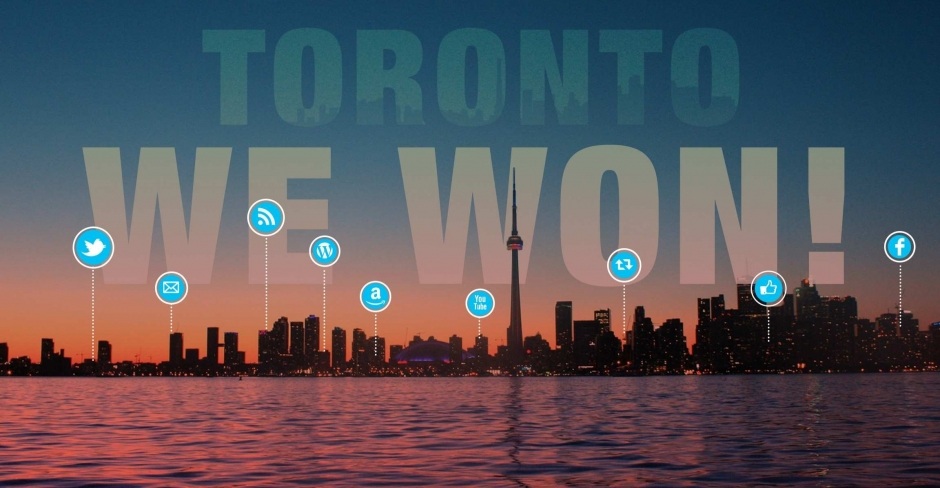 You did it, Toronto! It’s full steam ahead for Community Broadband!

You made it happen: thanks to thousands of emails from the community, Toronto City Council said YES to community broadband!

This is an INCREDIBLE move! Friday’s decision sends a strong message not just to the residents of Toronto, but the entire country: the affordability and service gaps left by Big Telecom will no longer be tolerated.

Toronto made the right call by taking Internet access and affordability into its own hands— and is setting the stage for a new approach to broadband rollout Canada-wide!

What problem will ConnectTO help solve?

Despite living in Canada’s largest city, over a million people in Toronto still suffer from poor quality and unaffordable Internet connections. New data from Ryerson Leadership Lab and the Brookfield Institute shows:

ConnectTO aims to build a community-owned fibre Internet network to connect homes and public spaces in Toronto, as well as leverage municipal resources and assets to help fix gaps in connectivity and affordability. As it stands, it will see ISPs purchase access to the network from the city in order to resell services to residents.

And amendments to the proposal made on Friday expanded ConnectTO’s scope even further; City Council has agreed to also examine public wifi options, prioritize low-income neighbourhoods and senior citizens, consult with the community and anti-poverty advocates, and locate existing city-owned infrastructure assets to leverage for connectivity. They even passed a motion that included two requests to the CRTC: to finally implement their 2015 plan for opening wholesale access for fibre broadband, as well as force telecom companies to roll over customers’ unused data at the end of their billing cycle.

Overall, the ConnectTO provides an incredible opportunity for the City of Toronto to fill the gaps left by Big Telecom, and ensure equitable Internet access for ALL of the city’s residents. This is a common-sense solution that will improve the quality and affordability of Toronto’s internet in every pocket of the city.

How did things get this bad?

The problem has gotten this bad only because the CRTC and the federal government have trusted Big Telecom for years to get it right.

For decades, the government has forked over huge sums of public funds to Big Telecom to build new infrastructure — often prioritizing them over communities themselves; yet swaths of the country still remain disconnected to this day. And to make matters worse, they’ve long let Big Telecom keep the Internet unaffordable for millions of people by enabling an oligopolist market, price gouging and slimy sales practises.

Clearly, we’re due for a new approach.

What are the benefits of community broadband?

Community-owned broadband is the best way to close Toronto’s Digital Divide for good — especially a fibre-optic network like ConnectTO. Where it’s been implemented, community broadband has given people faster speeds, more power to choose their providers, and overall cheaper Internet bills.

Why is fibre technology such an important factor?

Investing in fibre means investing in the gold standard. Fibre is the most future-proof proven technology; it has the capacity to meet growing speed demands in the decades to come, whereas speeds from older tech like cable/DSL max out at a fraction of what fibre can offer.

But Big Telecom has no intention of building fibre out to everyone unless it’s going to be profitable for their shareholders.

That’s why communities need to look into building fibre networks themselves. For other communities who have built their own fibre networks, it’s resulted in universal access to blazing fast speeds and infrastructure that will remain state-of-the-art for decades to come.

What does Toronto’s decision mean for the rest of Canada?

This is bigger than just Toronto; ConnectTO will have ripple effects across the entire country. If our current Big Telecom-driven system can't adequately connect Canada's largest city – what chance does the rest of the country have?

If municipal intervention is needed to bridge the Digital Divide in the city with arguably the best incentive for market investment from Big Telecom, our other cities are in need of similar intervention. Municipalities everywhere will be looking to the Toronto model and saying, “If TO can do it, so can we!” With ConnectTO, we’re watching a premier Canadian community broadband case study in the making.