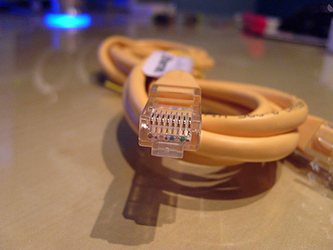 This piece originally appeared in the Canadian Centre for Policy Alternatives Monitor “If you want it done right, you have to do it yourself.”  In a bold take on this adage, more and more municipalities across Canada have taken it upon themselves to ensure affordable, citywide Internet access through community-based networks known as municipal broadband, typically operated by local governments, public utilities, co-operatives, non-profits or public-private partnerships. Recent developments in the United States highlight their significance and potential role in galvanizing Canada's otherwise lacklustre digital policy.

In January, U.S. President Obama delivered a landmark speech in favour of municipal broadband from the small industrial town of Cedar Falls, Iowa—a town notable for its ultra-fast 1 Gbps (1,000 Mbps) municipally owned Internet service. Shortly after, the U.S. Federal Communications Commission (FCC) redefined “broadband” Internet to mean a minimum speed of 25 Mbps, a forward-looking national standard that showed an understanding of people’s needs in the digital era. Meanwhile, New York State is investing US$500 million to provide 100 Mbps Internet to every resident and business by 2019.

By comparison, Canada's most recent stride forward in digital strategy arrived last April in the form of Industry Canada's Digital Canada 150, which ostensibly aims to deliver a minimum of 5 Mbps Internet service to 98% of Canadians by 2017. Put bluntly, the federal government's most prominent aspiration for Canada's digital future maxes out at one-fifth of the U.S. legal minimum. Canada's bottom-third OECD ranking for upload and download speeds (Ookla Net Index, 2015) only adds to the dismay.

In contrast to this federal timidity, pioneering municipalities have sensed which way the data is blowing.

Megabit for megabit, these cities are punching above their weight. Their initiative demonstrates how municipal broadband is rooted in sound policy and can have significant benefits.

For municipalities, increased cost-effectiveness, efficiency, economies of scale, revenue, and savings ensue, not least for other municipal services that can use the enhanced connection to improve their own functionality for residents. QNet, for instance, saved Coquitlam approximately $360,000 per year in telecommunications costs, and generated a $75,000 surplus in 2013.

Municipal broadband also stimulates the local economy by attracting and retaining small businesses, while cutting their expenses and enabling them to compete with global enterprises, and creating employment such as the 700 jobs that emerged in Stratford. Furthermore, all generated value remains within the community itself through spending or reinvestment, instead of flowing out toward distant head offices.

In terms of the public good, municipal broadband promotes universal Internet access, particularly in low-income or rural communities that are underserved or passed over as insufficiently profitable by private Internet providers. Municipalities taking up the broadband slack recognize that Internet access is now an essential service in every sense of the term, and should not be left to private enterprise alone.

Where private companies do provide Internet service, they lack the accessibility, responsiveness, transparency and accountability to the public that a community-based broadband network has. We frequently learn this the hard way, such as when Telus blocked its own union's website from Internet subscribers during a 2005 strike, or when Bell Mobility charged northern subscribers fees for a 911 service it never set up.

As the groups Free Press, Media Access Project, and the Consumer Federation of America explained in a joint report, “[i]t is naïve to expect that [private companies] will take into account a community’s desire to avoid poor health care, substandard public education, or the flight of under-served businesses.” With municipal or community broadband, addressing such concerns is often the very point.

To be sure, there will be challenges. Opponents argue that municipal broadband burdens taxpayers with risk that could be allocated to businesses, and constitutes unfair competition that interferes with free-market efficiency. They also argue that municipalities lack the competency to manage the complex systems required and will be less responsive to technological change.

However, Canadian incumbent carriers—themselves beneficiaries of government subsidies—sorely need the competition that municipal broadband could provide. Any public project carries risks. Municipalities have demonstrable track records managing transit, sewage, water, roads and other complex critical infrastructure, all of which, theoretically, could be privatized but are not, for overriding policy reasons in view of the public interest.

Perhaps most notable is how municipal broadband has emerged as a dynamic site of meaningful civic engagement, bringing together sundry individuals and organizations to achieve people-oriented and community-rooted objectives.

As a form of local activism, it may be no coincidence that small cities and rural towns are leading this particular technological charge. O-Net Accounts Director Nathan Kusiek told one CKFM reporter, “[W]e've had interest from communities probably on a weekly basis asking us how we've done this, how they would do it, if we can help them, so there are several communities that are in talks with us.”

Perhaps Industry Canada could give them a call as well.

Cynthia Khoo is a policy research intern with OpenMedia.ca, a community-based organization that safeguards the open Internet. Steve Anderson is the executive director of OpenMedia.ca.

Everything you didn’t know about CanCon January 18 2021