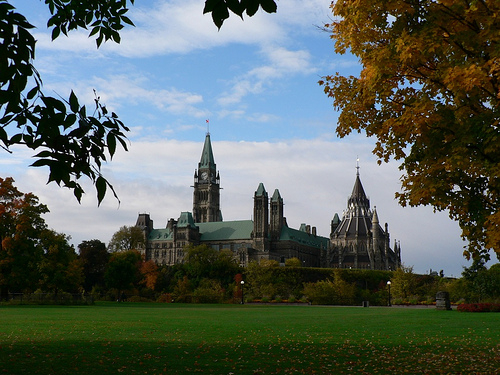 Our TPP ads are up right outside Prime Minister Trudeau’s office!

OpenMedia community: your message against the TPP is right outside of Parliament for Trudeau to see and this would have not been possible without you — THANK YOU!

Nearly 12,000 people urged the government to withdraw from the Trans-Pacific Partnership (TPP) agreement without the U.S. in the last public consultation through our petition. In addition, almost half a million citizens worldwide have opposed the TPP just through OpenMedia's actions.

To our dismay, the government moved forward with the agreement only few days after closing their own consultation. And although they took a positive step forward by suspending the controversial, U.S.-centric intellectual property (IP) provisions, once again, our voices were ignored.

In response to this blatant attack on our democracy we teamed up with Leadnow, Private Internet Access, United Steel Workers, CUPE National, CWA Canada, and thousands of people like you to get the Prime Minister’s attention.

Together, we strategically placed bus shelter ads directly in front of Parliament and the Prime Minister’s Office calling out Trudeau for ignoring Canadians in favour of the global elite.

The ads are now up and this is what they look like!

This would not have been possible without our partners and the support of thousands of individuals who generously pitched in for our ads. We’re so thankful for this support!

We’ve put similar ads around Parliament before and they have caught the eye of our politicians. There is no way Trudeau and key decision makers will miss our message and they’ll need to think twice before making any major decisions during TPP talks in the new year.

These ads, in addition to a lot of hard work campaigning on the TPP for over the past five years, have decision makers on the defence now. We have already seen them taking small steps in the right direction in areas like the IP chapter. We are not going to stop until we see them take our feedback seriously and fully embrace the ‘progressive trade’ they claim to be committed to.

Thank you OpenMedia community and a special shout-out to our community member James who took these awesome photos for us!

P.S.: Here’s a closer look at what the ads say. We're asking our community to tweet @JustinTrudeau by visiting ListentoCanadians.ca and using the hashtag #ListenToCanadians to remind him that Canadians have been overwhelmingly opposed to the TPP since day one. It’s time for him to start listening.