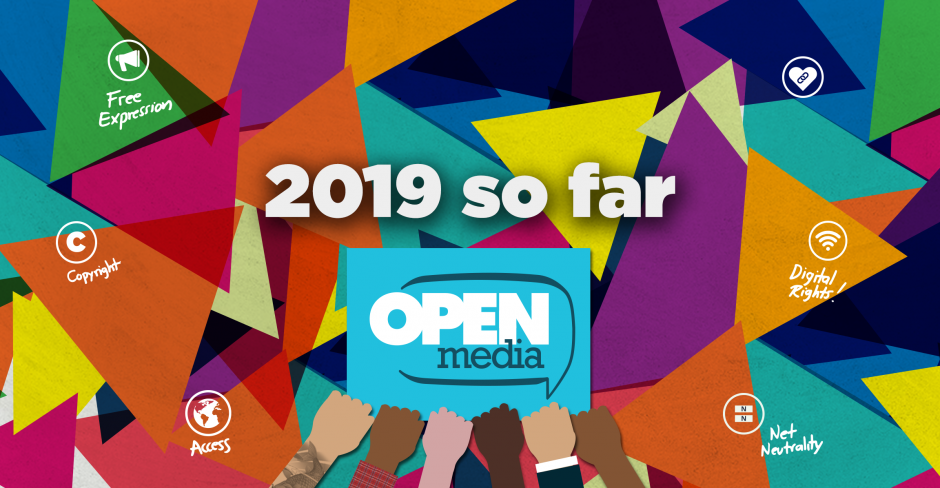 Need a break from the election? Here are some happy memories

The past year has been a rollercoaster on the digital rights front. But together, the OpenMedia community has achieved a lot. Here’s an overview of our wins and what’s on the horizon.

Fall is here, the federal election is just days away, and there’s a plethora of issues on the digital rights front. From Canada’s political parties coming under fire due their subpar privacy standards, to cell phone affordability making it into three party platforms as an election issue, the OpenMedia team and community have been busy bees.

So, as we get ready to greet the new government, let’s take a look at some of the major accomplishments we’ve achieved together in the past year across our three pillars of the Internet: access, privacy and free expression, and what’s ahead of us.

Canada is currently reviewing the laws that govern all of its communications system, including the mighty Internet. From Net Neutrality, to telecom services affordability, to Big Telecom’s bad sales practices, this review covers a vast range of issues that will fundamentally shape the Internet for many years to come. So to kickstart 2019 right, OpenMedia submitted a detailed policy submission, endorsed by 9,636 community members to foster an innovative and open Internet in Canada.

After way too many years of CRTC decisions that put Big Telecom’s interests before those of the people, the federal government acknowledged it was time for a significant change. The government issued a new policy direction whose main focus is to “promote competition, affordability, consumer interests and innovation” through the CRTC’s decisions. The new policy direction starkly diverged from the previous approach — which heavily relied on market forces and was conducive to Canada paying some of the highest telecom prices in the world for mediocre service.

OpenMedia submitted over 14,000 voices to the government in support of the new policy direction along with our submission demanding a fundamental change in our telecom market

The CRTC announced it would be conducting a comprehensive review of the state of Canada’s wireless market just two days after the government announced the new policy direction. Combined, these two moves could bring about a sea change to Canada’s cell phone market.

Here's the best part about this review: For years, the CRTC denied access to smaller cell phone providers known as Mobile Virtual Network Operators (MVNOs) that lease wireless capacity from the bigger telecoms. Now it has finally opened the door to that possibility, with the potential to foster greater competition in the wireless market and thus, lower prices. The OpenMedia community has been one of the loudest voices in the space pushing for MVNOs and a more competitive cell phone market, so this review is in great part the result of our pressure and hard work.

As part of the CRTC’s wireless services review, OpenMedia already submitted over 18,000 signatures in the first round of comments along with its detailed policy submission. We are currently running a survey on cell phone affordability and choice. We will be submitting responses in the second round of comments on November 22nd and show the CRTC that our wireless market is still broken.

Over the summer the B.C. government launched a consultation to hear about British Columbians’ experiences with their cell phone providers and contracts. The government reached out to OpenMedia directly to take part in this process. I met with MLA Bob D’Eith and his staff, who are spearheading the consultation, to deliver our recommendations on how to improve cell phone services at the provincial level along with over 3,000 signatures from our supporters.

In August the CRTC significantly cut down the rates for what Big Telecom can charge smaller providers for network access. As a result, a handful of smaller Internet service providers, like Teksavvy and Distributel, are already passing that benefit on to their customers in the form of lower bills and faster speeds. Big Telecom, as you can imagine, is not happy with this decision (at all), so they are trying to overturn the decision at the Federal Court of Appeal. But in the meantime, let’s all enjoy better broadband services and hope that the decision is upheld and sets a strong precedent.

This CRTC decision is the product of years of pressure from thousands of OpenMedia community members who have demanded more choice and a level playing field for smaller broadband providers.

For over a decade the OpenMedia community has been demanding more affordable cell phone plans and more choice of providers in Canada. This year, three political parties (Liberals, Greens and NDP) finally pledged to address the issue in their election platforms.

This win is also the result of years of advocacy from hundreds of thousands of cell phone users across Canada who struggle to keep up with their monthly bills. But the battle doesn’t stop here — we will need to make sure the next government follows through to make lower cell phone bills a reality. (Stay tuned!)

Right to repair legislation picks up momentum in Canada

This year OpenMedia joined the push for right to repair legislation in response to the first bill of this kind tabled in the Ontario parliament by MPP Michael Coteau. The right to repair would give people increased control to repair their stuff (whether it be medical equipment, an electronic device, appliance or farm equipment) by requiring companies to make repair manuals, diagnostics tools, necessary software and service parts available at a reasonable and non-discriminatory price. Enshrining the right to repair into law would also help reduce the vast amounts of e-waste that wind up in our landfills every year.

The right to repair is highly popular— a poll commissioned by OpenMedia revealed that 75% of people in Canada support this legislation. Additionally, OpenMedia’s petition calling on right to repair legislation has garnered nearly 15,000 signatures. Both our poll and petition made the headlines (CBC, Global News, National Post, Toronto Star, Mobile Syrup, City News).

Stat Can was planning on vacuuming up the personal banking information — including account balances, ATM withdrawals and credit card payments — of thousands of people in Canada, without their consent or knowledge. So the OpenMedia community rallied together, sending over 7,000 messages to MPs and demanding an update of the Privacy Act to better protect our rights on issues like this. Our community also filed thousands of access to information requests to know whether StatCan had already swept up their information, making it impossible for StatCan to ignore. StatCan has since suspended its plan to do credit searches and obtain banking information.

We set out to buy billboards inside the Vancouver International Airport Skytrain terminal to warn travelers about electronic device searches at the border and inform them about their rights. But Vancouver airport officials refused to run our ads, with no explanation. This campaign was promoting publicly available information. Additionally, the information we were providing was vetted by lawyers, and is in alignment with recommendations put forward by Canada’s Ethics committee.

But our efforts didn’t stop there. We doubled down on our advertisements and plastered them on trains to the airport, so that they could reach even more people than before. Over 14,000 people took action at borderprivacy.ca to protect our digital privacy at the border. For more background on this campaign click here.

For far too long, Canada’s political parties have resisted all efforts to make them subject to federal privacy laws — the same laws that they require companies to adhere to. This means that they don’t have the same requirements around information collection, storage and transparency, nor would they be required to notify you if your personal information was hacked.

The OpenMedia team has been working hard to change this: presenting at government committees, commissioning polling, and helping over 5,000 people message party candidates to send a strong message: change these rules now. Our new tool helps people request exactly what information parties have on them, putting power back in their hands. This pressure and the multiple media stories it’s generated (CTV news, Business in Vancouver, Prince George Matters, City News Edmonton) has turned up the heat on parties significantly, with several parties coming out with statements in favour of ending this exemption. Post-election, we’ll keep pushing for real action on this issue.

Facial recognition: pushing for a moratorium

Facial recognition technology is invasive, biased and unreliable. And even worse, it’s not yet covered by Canada’s outdated privacy laws. Despite this, a handful of Canadian government and law enforcement agencies have started using this highly controversial technology — in essence experimenting on us with no oversight or regulations.

We’re committed to pushing the government to enact a moratorium on the use of this technology. And already over 10,000 people in Canada have signed to support this campaign. We’ll be sure to keep you posted!

Your views shaping the future of Canadian copyright

Last August we started collecting public input on Canada’s Copyright Act review via our slick tool at https://letstalkcopyright.ca. In October of 2018, OpenMedia was invited to testify before the Standing Committee on Industry, Science and Technology (INDU) to present our recommendations and most importantly, deliver our community’s voices straight to decision makers. Committee members noted that they had been receiving multiple letters from our supporters during our testimony.

By December, we submitted over 4,400 unique responses to INDU’s consultation along with our official brief — and our efforts went a long way…

Fast forward to June 2019, the INDU committee released its report on the Copyright Act consultations it conducted, and OpenMedia’s recommendations were referenced multiple times throughout the report. The report generally put forward a balanced vision for the future of copyright in Canada. Additionally, their efforts to consult with multiple stakeholders and incorporate their views into the review (which is not easy, as many of these views are directly opposed to each other) was evident in this report, and the OpenMedia community was no exception!

One of the most outstanding recommendations from the INDU committee's report is the rejection of Bell's FairPlay website-blocking proposal and insisting that website blocking includes court oversight.

In case you need a refresher — FairPlay Canada was opposed by dozens of experts, over 70,000 individual submissions via OpenMedia’s website, and 57,000 other submissions across Canada, as part of the CRTC’s consultation. OpenMedia also expressed its opposition to FairPlay in its submission to INDU.

This proposal currently sits before the Broadcasting and Telecommunications Acts Review panel, which will publish its report in early 2020. But having already been rejected by the CRTC in October 2018, and most recently by INDU, this censorship proposal sits on shaky ground.

This marks a huge win for the OpenMedia community! And you bet public pressure played a major role in making this website blocking plan toxic.

These are just some of the highlights of everything we have achieved together in the past year. We couldn’t have done any of this without our amazing community of supporters taking action, contacting decision makers, and donating. So thank you on behalf of the OpenMedia team, to each and every one of you, for everything you've done to make this all possible.

We look forward to keep up the hard work across our access, privacy and free expression pillars to safeguard the possibilities of an open Internet for everyone in Canada. And whichever government takes over next, we’ll be right there holding them accountable.