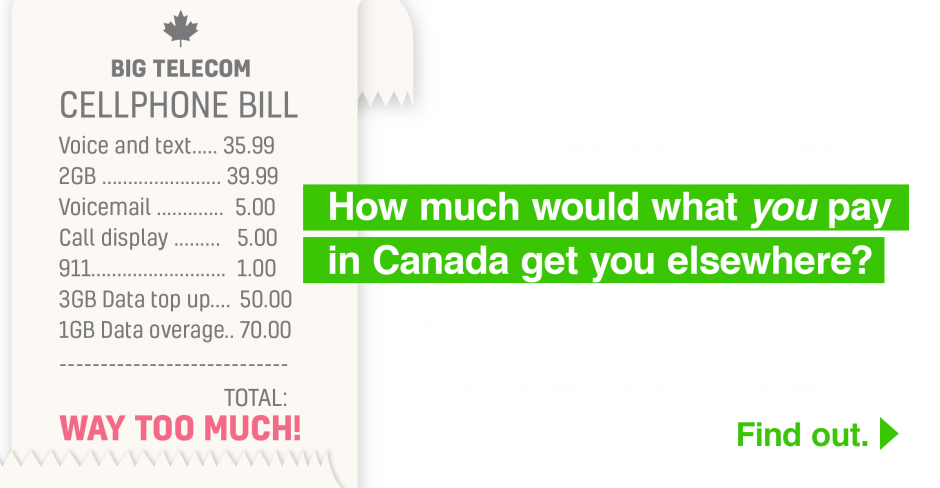 Why do people in Canada still pay some of the most expensive cell phone bills in the industrialized world? Here's how it all went down, where we are now, and where to next:

This article was originally published by Rabble magazine.

Tell me: How much do you pay for monthly cell phone bill? If you live in Canada, the answer (sigh) is still: too much.

Why are we stuck paying sky-rocketing bills while Big Telecom's narrative is all about increased investment and providing quality service? The simple answer is the lack of choice in our wireless market and the well-established dominance of the Big Three -- Bell, Telus and Rogers -- who have received decades of government subsidies to build out their infrastructure.

To better understand how we keep paying some of the highest cell phone bills in the industrialized world, while other countries pay way less than that -- let's quickly walk through the tragic story of what are known as Wi-Fi first Mobile Virtual Network Operators (MVNOs).

Wi-Fi-based MVNOs are cell phone providers that primarily rely on a Wi-Fi connection and lease wireless capacity at wholesale rates from other providers that own the infrastructure (in Canada's case, the Big Three), which allows these MVNOs to resell wireless services to consumers at a discounted price. This is a common model in the U.S. and Europe.

The problem is that in Canada (unlike for wireline internet -- things like your home internet, which use cable, DSL, or fibre), it is not mandatory for Big Telecom to provide wholesale access to the smaller guys at a reasonable price. So in the Canadian telecom arena, this practice is more like an act of goodwill and that simply doesn't happen.

The closest we've come to these kinds of providers in Canada is an innovative wireless startup called Sugar Mobile, which was using this model before the Canadian Radio-television and Telecommunications Commission (CRTC) ruled this setup was not allowed. However, this is by no means the end of affordable MVNOs in Canada!

Here's how it all went down, where we are now, and where to next:

December 2015: Sugar Mobile was founded by Iristel (majority shareholder of Ice Wireless). It offered unheard of cell phone plans starting at $19 per month. Ice Wireless, its parent company, owns networks in Canada's North and has reciprocal roaming agreements with the Big Telecoms. Sugar relied on these agreements to allow its customers to roam on Rogers' networks outside of Ice Wireless' area of coverage. However, Rogers wasn't too happy about that (as you can imagine).

February 2016: Ice Wireless files complaint to the CRTC arguing Rogers is planning on blocking it and other MVNOs from roaming on its network. Rogers argues it didn't have a roaming agreement with Sugar.

February 2016: The CRTC sticks to its original decision from 2015, arguing that mandatory wholesale access would hinder investments from companies building their own networks.The dispute between Rogers and Sugar Mobile continues.

June 2017: The Sugar Mobile decision is kicked back to the CRTC for reconsideration, by order of Minister of Innovation, Science, and Economic Development, Navdeep Bains.

March 2018: The CRTC shuts the door on MVNOs yet again, rejecting Minister Bains' order to revisit the Sugar Mobile decision, instead asking the Big Three to put forward proposals for a low-cost, data-only plan as a means to provide an entry-level data plan for the market.

April 2018: The Big Three propose their outrageous low-cost data plans of only 500 MB for $30 per month and the public begins to weigh in on these plans with their frustrations.

Fall 2018: A CRTC decision on low-cost data plans is expected.

This lack of affordability and choice could all be solved with enough political will. Minister Bains already has the authority to bring more choice to our cell phone market, and lower costs, by just mandating full MVNO access at fair rates.

OpenMedia has just launched a new tool that shows you just how much what you pay for your Canadian cell phone bill could get you elsewhere in the world -- and then lets you call Minister Bains directly and ask him to take action.

The goal: his office will be flooded with evidence on how our wireless market is deeply broken (a recent report shows no other country has carriers that generate more revenue with less usage! In other words -- wireless data is so expensive here people are just forced to use less of it).

If we can get thousands of people to use this tool and call Minister Bains, he will not be able to further delay action. Spread the word by sharing the tool on Facebook, Twitter or emailing your friends this link!