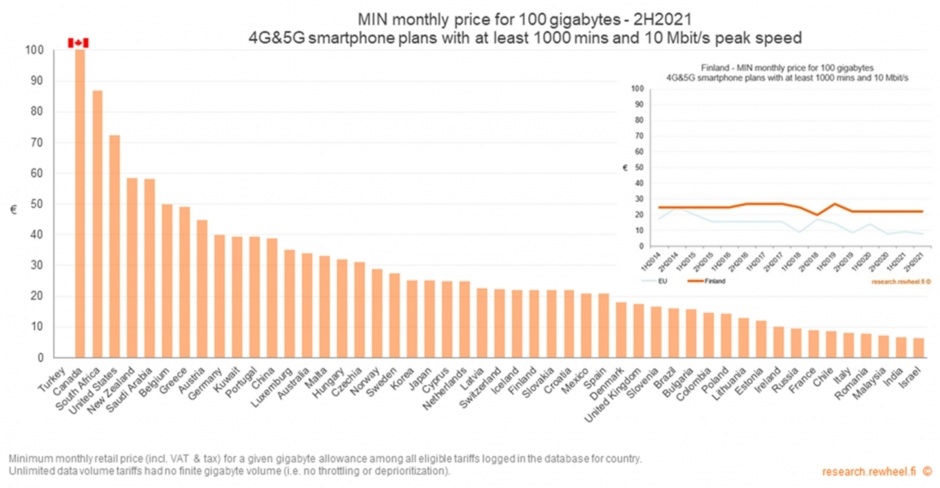 Rewheel’s 2021 report yet again confirmed the ugly truth: People in Canada continue to pay some of the highest prices in the world for our wireless services.

This month, Finland-based telecom research firm Rewheel released its latest report on global wireless prices. Their findings will come as no shock to anyone who has a cell phone plan in Canada: after comparing prices across 50 countries, Rewheel found that Canada’s cell phone prices “continue to be the highest or among the highest in the world”.

What we pay in Canada compared to our international peers can be mind-boggling. In September 2021, Rewheel found that the minimum monthly price for a 100GB plan was a whopping 13x higher in Canada than the same plan in France.

This isn’t the first time Rewheel has shed light on our country’s shameful performance, either. For multiple years, their reports have shown that Canada’s wireless prices are much less affordable than the global average. Rewheel’s 2021 report simply cements what we already know: Canada is nowhere near catching up to the rest of the world when it comes to affordable connectivity.

There are clear solutions to our pricing problem. We can’t stress enough that competition is the most straightforward way to drive down wireless prices in Canada. Our government knows that Canada’s wireless services are too expensive and not globally competitive; they know that the Big 3 are charging monopolistic prices, too — their own reports confirm it. But despite this, our policymakers and the Competition Bureau are still considering letting Rogers purchase Shaw in one of the biggest telecommunications buyouts in Canadian history.

This will make a bad situation even worse. Today, Rogers, Shaw, Telus, and Bell make up Canada’s four national cell phone providers. Allowing this merger would leave us with three. We’ve already seen how this consolidation of competition plays out with the example of the 2017 Bell-MTS sale in Manitoba; after absorbing MTS, Bell raised prices.

If the Rogers-Shaw sale goes through, fewer providers in the market will lead to our wireless services getting even MORE expensive than they already are. And as Rewheel confirmed with its report, that’s an outcome Canadians simply can’t afford.

Unfortunately, the Rogers-Shaw sale isn’t the only threat to wireless affordability knocking on our doorstep. Since April, our government has been mostly silent on the Canadian Radio-television and Telecommunications Commission’s (CRTC) attack on viable MVNOs — low-cost alternative mobile providers.

As a driver of competition, MVNOs are key to lowering our cell phone bills. But earlier this year, the CRTC issued a decision that largely rejected introducing these providers to Canada. Instead, the decision doubled down on our current dysfunctional cell phone market, demanding any new competitor build expensive networks that largely duplicate our existing infrastructure.

If the CRTC were to fully open up Canada to MVNO alternative providers, they could permanently sell services to people in Canada for less than we’re currently paying with Big Telecom, offering us greater choice of carriers, more affordable and more diverse plans, as well as putting pressure on providers like Bell and Rogers to lower their own prices to compete.

Does Canada want to have the world’s most expensive wireless services forever? If we want fair wireless prices for everyone in Canada, we need our leading politicians to prioritize our right to affordable access NOW. That means blocking Rogers from further cutting down mobile services competition in Canada by buying Shaw, and immediately reversing the CRTC’s decision to bar MVNOs from fully entering our wireless market.