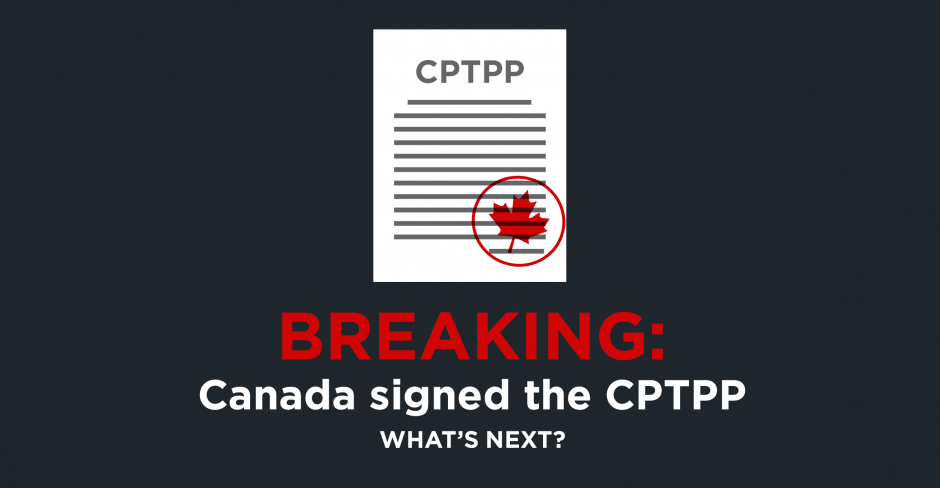 Yesterday Canada joined 10 other countries in reaching a deal on a reworked version of the TPP, suspending some Intellectual Property and ISDS (Investor State Dispute Settlement) provisions that would have had detrimental impacts on the open Internet. The work doesn't end here, but this win for the Internet community would have not been possible if it wasn't for you — so thank you for speaking out!

In a big win for the Internet, the new agreement suspends many of the controversial provisions included in previous versions, including some Intellectual Property (IP) and ISDS (Investor-State Dispute Settlement) provisions. These suspensions are not a coincidence — these were among the top concerns raised in over 18,000 emails sent to the government on behalf of concerned Canadians.

This is all because of you, our community! The overwhelming majority of these submissions came from the OpenMedia community, using our Let’s Talk TPP tool. The Minister of International Trade, François-Philippe Champagne noted the influence of public feedback with regards to the IP chapter in the new version of the TPP.

The improvements in the new TPP are a testament to all these years of pressure and relentless work. We never backed down, kept up the pressure, and finally the government listened.

However, even with these improvements, the CPTPP — and especially the process through which it was negotiated — is still deeply flawed. Discussions continue to be held behind closed doors, with little information available to the public.

Despite how far we’ve come, there’s still much to do. This week marks the 6th round of negotiations in NAFTA – yet another trade agreement where our digital rights are still at risk, and our government continues to negotiate in secret without the transparency we were promised.

So we’ll still be here, working to make sure that the government is held accountable to its citizens, and does not ignore our digital rights. We need you to stand with us as we continue to demand transparency and accountability from the government, in the final stages of the TPP, the upcoming NAFTA agreement, and all ongoing trade negotiations.

These negotiations are supposed to benefit us all, and thanks to your efforts, we are much closer to that than we might have expected.

Everything you’ve done so far has led us here, so I want to say thank you OpenMedia community! It’s a big win in what has been a long and notoriously closed process.