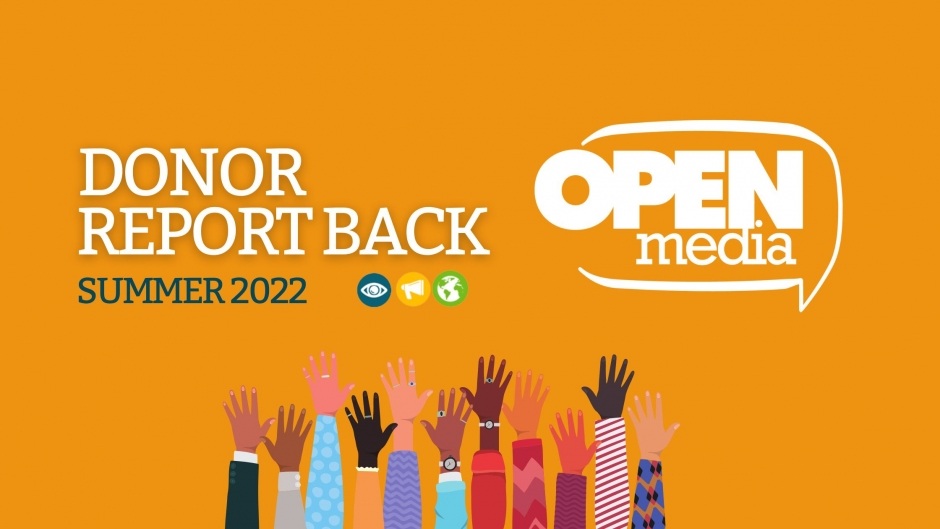 2022 has been a busy year so far: Here's a quick look at what we've achieved with your support!

2022 has been a busy year for OpenMedia! From the disastrous Bill C-11, the Rogers-Shaw Deal, Bill S-7 and more, OpenMedia has been hard at work. Here’s a peek at what OpenMedia has achieved so far this year, and the numbers behind our impact. These are only possible with the support of our grassroots community donors like you!

WIN: Boots on the ground at the Calgary Stampede

WIN: The Fight against C-11 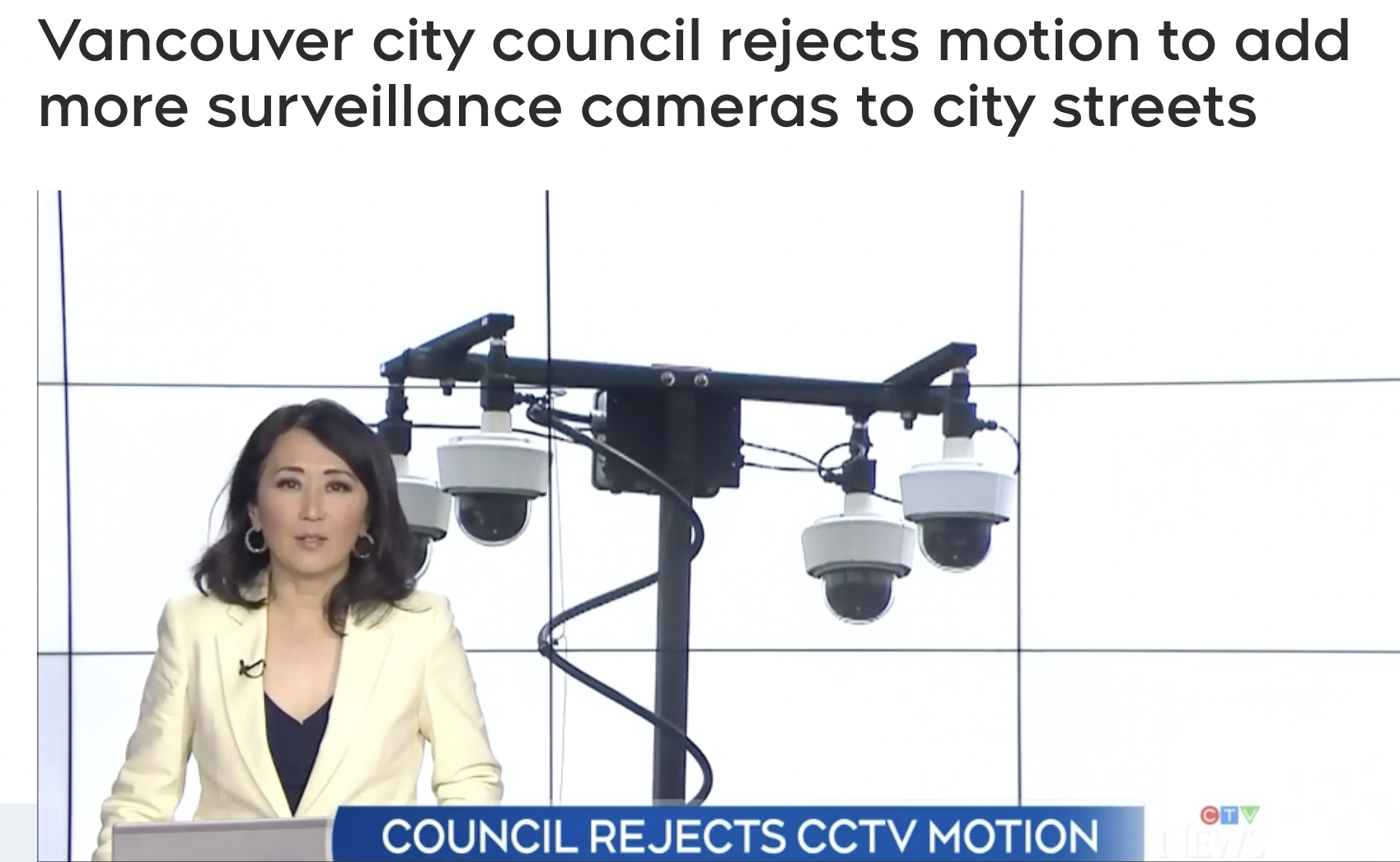 In May of this year, Vancouver City Council reviewed a proposal that would have begun the installation of a network of CCTV cameras for the police. OpenMedia showed up at the meeting and broke down the fallacies in the proposal, revealing some of its fundamental failures regarding surveillance and facial recognition. We responded quickly because of the sustained support of grassroots community members like YOU. The motion to increase mass surveillance and infringe upon individual privacy was swiftly defeated. 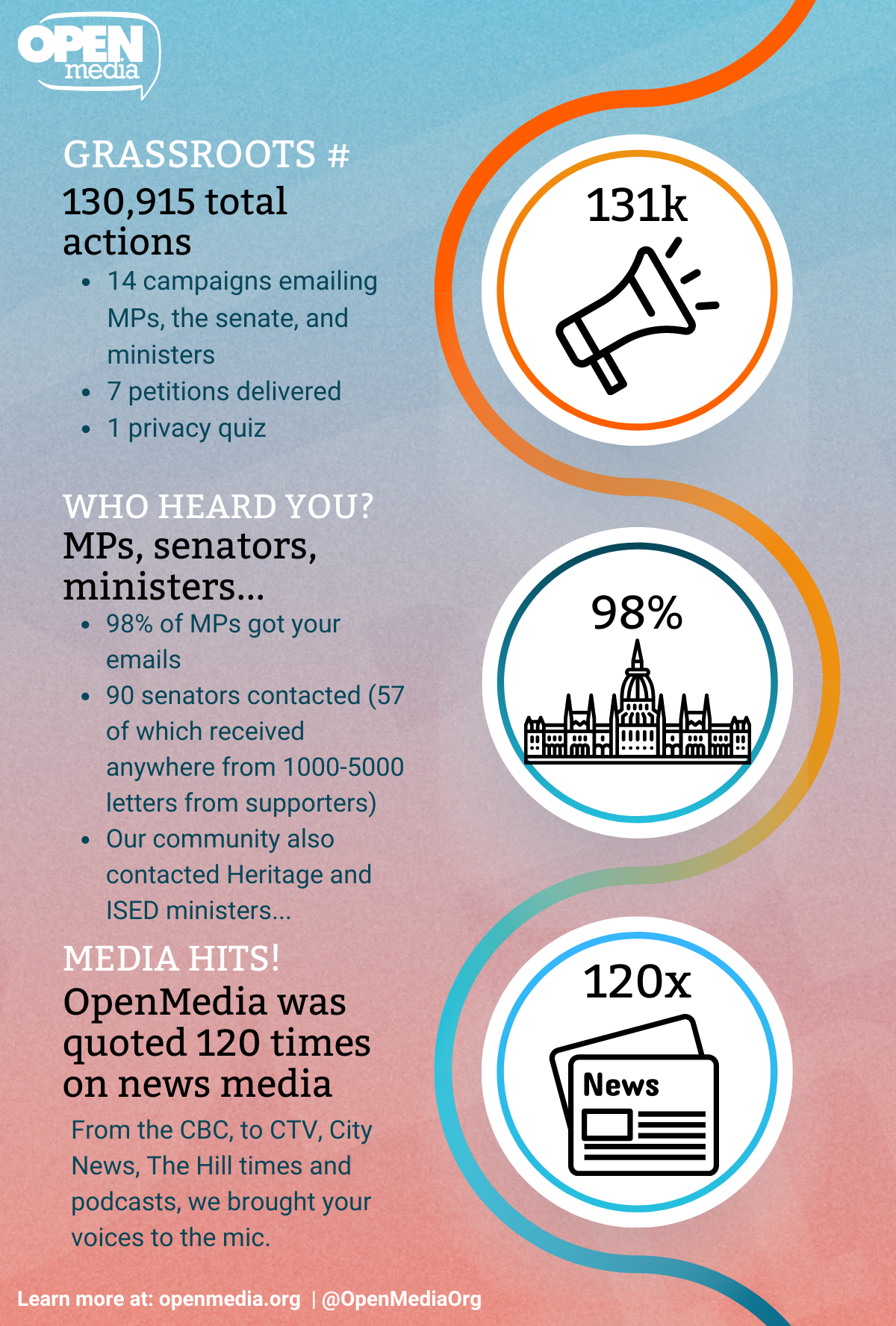 Beyond the highlights across our campaigns, the OpenMedia community has already made a BIG impact through the actions YOU have enabled through donating and taking action.

Together, we can make our voices heard. So far in 2022, the OpenMedia community has totalled over 130,000 actions spanning from Bill C-11, the Rogers-Shaw Buyout, Anti-Trust reform, and more.

Our email campaigns allow you to speak directly to your MP about your top priorities. In 2022, we’ve contacted 98% of MPs in Canada and won’t stop until YOUR voice is heard by everyone in Parliament.

We’re hustling daily to give YOUR voice the biggest platform in Canada. In 2022, we’ve been cited as experts over 120 times in National and International publications like Bloomberg, National Post, Cartt.ca, Rabble, and more.

Message From Our Executive Director

Thank you for your support of OpenMedia. These are only a few highlights of the impact we have when we work together in creative ways. What’s next? We’re ramping up to September 19th when Parliament is back in session so we are ready to continue the fight against the worst ideas our politicians, and the lobbyists that target them, come up with. We won’t stop calling for the changes that empower you; your rights, your privacy, and your fast and affordable access to the Internet. This includes continuing the fight against Bill C-11, Bill C-27 and the continued shift toward the monopolization of Big Telecom. We could not face these threats without you and your generous support.