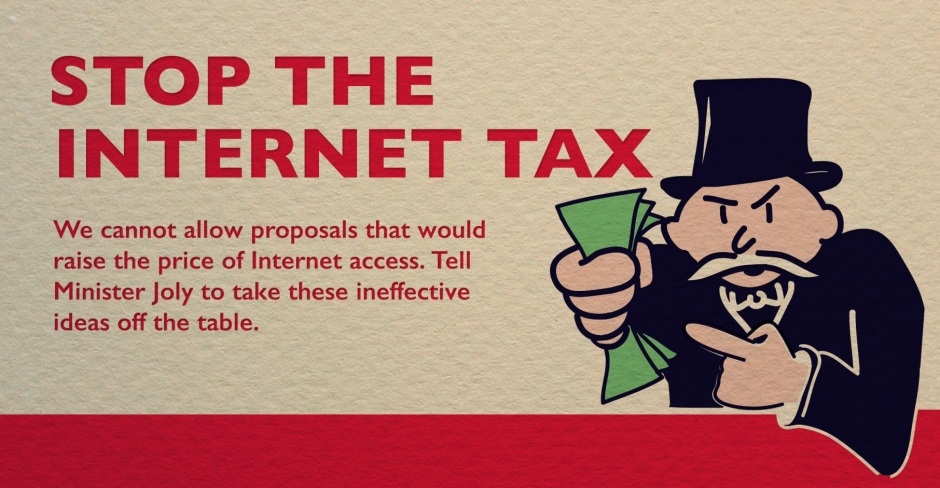 With Your Help, OpenMedia Lays Out the Case against Internet Taxes for Canadian Heritage’s #DigiCanCon Consultations

OpenMedia submitted formal comments to Canadian Heritage's #DigiCanCon consultations, driving home the case against the Internet Tax. Here's what we told them.

On November 25, 2016, OpenMedia submitted your latest volley against the Internet Tax to Minister Mélanie Joly of Canadian Heritage. Over 23,000 of you (24,933 now) signed a petition opposing special taxes on Internet service providers (ISPs) for Canadian content, and OpenMedia’s submission to the #DigiCanCon Consultations made sure the Minister heard you.

The submission (embedded below) also presented OpenMedia’s strongest case against taxing Internet access. Not only did the comments cover Internet access affordability, the impact of worsening the digital divide for already-vulnerable and marginalized communities, and other reasons this would be a terrible mistake, but it also drove home how an Internet tax would undermine the purpose of the entire consultation: promoting and strengthening Canadian content in a digital world.

Canadian Heritage’s Background Paper on the #DigiCanCon consultations highlighted three key principles that they would move forward on in the implementation stage: 1) Focusing on citizens and creators; 2) Reflecting Canadian identities and promoting sound democracy; and 3) Catalyzing economic and social innovation. In response, OpenMedia’s submission highlighted how taxing Internet service would actually work against all three principles.

First, an Internet tax would hinder citizens and creators by making Internet access even more expensive, even when affordability is already a problem. This hurts creators’ ability to produce and distribute what they create, and makes it harder for audiences to access that content. It also penalizes all citizens for either consuming media and cultural content, creating and contributing to Canadian media and culture themselves, or using the Internet for any other reason that might not even relate to culture.

Second, the impact of increased Internet prices would hit underserved and underrepresented communities disproportionately, erecting an even higher barrier for members of these communities to contribute to culture, public discourse, and the media. This means that Canadian content would be less, not more, reflective of the diversity of identities within Canada, which weakens elements that go to a functioning and healthy democracy.

Third and finally, study after study has drawn a direct line between high-speed broadband Internet and economic and social innovation. This is also made clear in the fact that “increasing high-speed broadband coverage” across Canada is a key mandate for Minister Navdeep Bains of Innovation, Science, and Economic Development (setting up a future clash with Heritage if this tax goes through).

The submission ends with a series of alternative solutions that Canadian Heritage could consider for funding Canadian content, as well as other, better ways to promote and respect our creators. This last point incorporated copyright policies from the “Respect Creators” chapter of one of OpenMedia’s signature reports, Our Digital Future: A Crowdsourced Agenda for Free Expression.

If you want to dive in further, check out the annotated submission in the interactive tool below. In the meantime, keep an eye out for new developments—with any luck, Canadian Heritage will see that an Internet tax is the opposite of a 21st-century solution, and instead champion policies that strengthen Canadian connectivity as well as Canadian content in the digital world.

Everything you didn’t know about CanCon January 18 2021