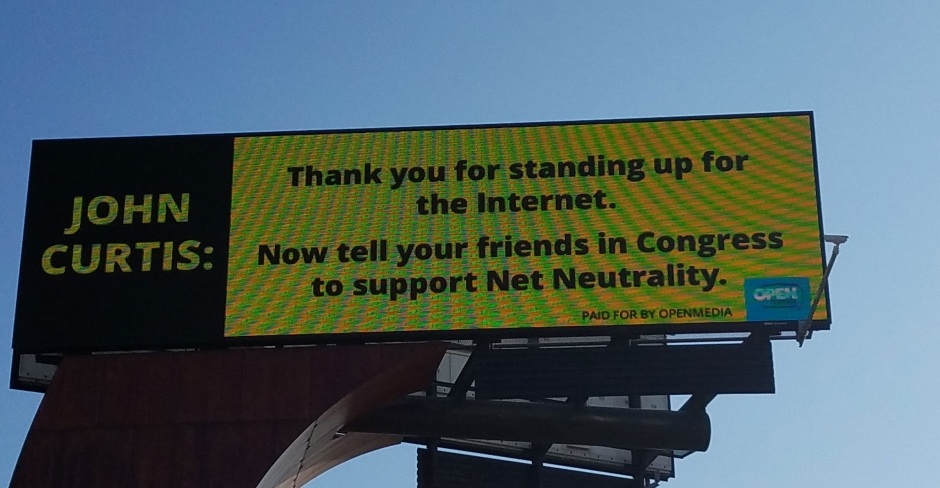 You made these Net Neutrality billboards possible!

Big shout out to all of you who chipped in to help us put massive Net Neutrality billboards in the U.S.! Stay tuned for the next steps in the fight, because it’s far from over.

A week ago the FCC voted to repeal Net Neutrality to the dismay of millions of people worldwide who protested against one of the U.S. government’s most unpopular decisions. Good news is: the fight is far from over, as Evan Greer, campaigns director at Fight for the Future, notes in this recent article.

So we wanted to take a moment to thank every single person in our community who has joined the Net Neutrality battle this year in one way or another — from calling your members of Congress to simply telling your friends about the issue and its importance at an informal get together.

We’d especially like to thank all those of you who donated to help us put massive Net Neutrality billboards in Utah and Washington state, commending members of Congress John Curtis and Dave Reichert for standing up for an open Internet.

Since then, we’ve seen more and more representatives from across the political spectrum turn against the FCC’s decision and in favour of Net Neutrality (a.k.a. #TeamInternet!), which means our efforts are paying off and we can’t give up until we ensure Congress overturns the FCC’s brutal, undemocratic decision.

Thank you for having our back and we hope to continue to have you by our side as the fight continues into the new year, because we are never going to give up! Make sure to read Evan’s blog mentioned above to know where we are at in the fight and what are the next steps to win back our Internet from Ajit Pai and his army of Big Telecom stooges.

In the U.S.? Contact your member of Congress at:https://act.openmedia.org/tellcongress

Not in the U.S.? Join the worldwide movement to save Net Neutrality at: https://act.openmedia.org/worldfortheweb

Our submission to the Broadcasting and Telecommunications Act review is in — thanks for speaking out! January 15 2019