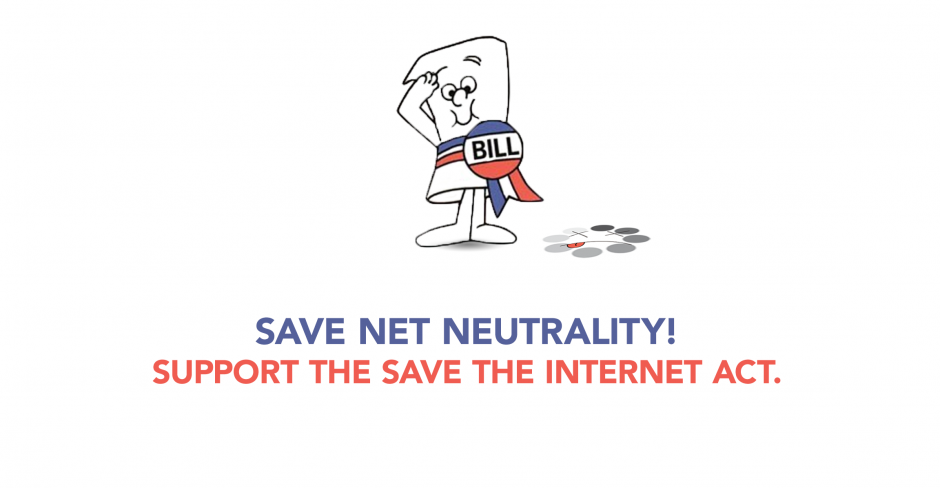 The Democratic congressional leadership just introduced a bill that could save Net Neutrality for real.

Today, the Democratic Party leadership in Congress announced they are introducing a bill to restore Net Neutrality protections. The bill, called Save the Internet Act, would restore the Obama-era Open Internet Order that established the Net Neutrality protections and would prevent the Federal Communications Commission (FCC) from repealing the rules again in the future.

In 2017, Ajit Pai, the Trump-appointed FCC chair, repealed the 2015 Open Internet Order, wiping out Net Neutrality protections and giving Internet service providers (ISPs) the power to decide what you can and cannot see on the Internet.

Since then, members of Congress paid by Big Telecom have attempted to introduce bogus Net Neutrality bills, but today’s bill is different and it’s significant. By legislating this in Congress,  Net Neutrality rules will be enshrined into law, preventing political appointments like Pai from interfering with how our Internet works.

But we still have a long fight ahead of us. While the Democrats control the House of Representatives, the Republicans still hold a majority in the Senate. This means we will have to mobilize Internet users across the country to pressure our lawmakers to pass this bill. But if our experience from last year taught us one thing, it’s that our movement is strong enough to get this passed.

Last year, Congress attempted to restore Net Neutrality by using the Congressional Review Act, a tool that allows them to overturn FCC decisions. Despite both houses being controlled by a Republican majority, there was bipartisan support to pass the resolution in the Senate and we were close to passing it in the House of Representatives.

This long fight set the stage for today’s announcement. Lawmakers are realizing that supporting Net Neutrality is a no-brainer. Polls have shown that the vast majority of Americans across the political spectrum are in favor of strong Net Neutrality protections.

Only lawmakers funded by Big Telecom are still opposing Net Neutrality, and it’s up to the American people to hold these lawmakers accountable. Over the next few months, OpenMedia will be working with a coalition of groups across the United States to ensure that Congress passes this bill to finally get real Net Neutrality protections enshrined into law.

For now, we need to show our support to the lawmakers who introduced this bill.

Make sure to take a second to send a message of support to House majority leader Nancy Pelosi and Senate minority leader Chuck Schumer for standing behind this bill.