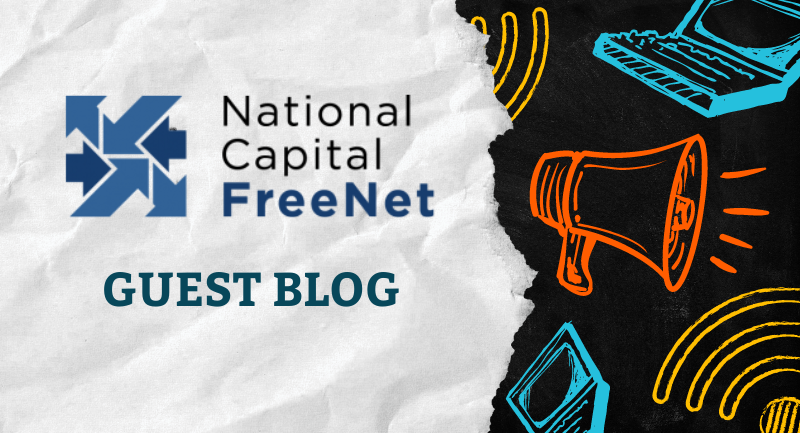 In a recent update, NCF shared that they were forced to put their plans to expand the CAF program on hold due to the CRTC’s 2021 Internet price hikes decision — a ruling that led to more expensive Internet prices for everyday people, and made it extremely difficult for independent providers to continue operating. Industry, Science, and Economic Development (ISED) Minister Champagne and Cabinet choosing not to revisit this ruling is a major contributing factor in the near-total collapse of Internet competition we're currently experiencing in Canada.

OpenMedia stands by our friends at NCF, and we’re glad to amplify their voice in the fight for affordable connectivity for all.

The following article was first published by National Capital Freenet on ncf.ca in October 2022.

Still fighting for change after 30 years

“We’ve literally spent two decades talking about the necessity of ensuring universal access to affordable broadband and yet it still hasn’t happened….I think it starts with leadership at both the political and regulatory level.” - PROFESSOR MICHAEL GEIST, UNIVERSITY OF OTTAWA

We’re so proud NCF recently celebrated our 30th anniversary as a not-for-profit community internet provider. We’ve learned a lot since 1992, keeping pace with changing technology while keeping our focus on offering affordable, high-quality internet, helping our members understand how to use it and feel safe online.

But frankly, despite all our past successes, we’re worried about our future as an alternative to big commercial internet providers. Government policies have favoured big telecom companies, enabling them to buy up competitors, drive up the cost of home internet, and limiting our ability to expand programs for low-income communities.

The CRTC wholesale rates that determine what we pay Bell and Rogers for using their networks to help deliver our services are just too high.

The CRTC said so themselves when they DROPPED LINE AND CAPACITY RATES SUBSTANTIALLY in 2019 after three years of analysis. We were excited about the possibilities of passing these savings onto our members, including expanding our COMMUNITY ACCESS FUND for those living on low incomes. Then, after lobbying by the big telecom companies, THE CRTC REVERSED ITS OWN DECISION and kept the old, higher rates.

The big telecom companies argued they needed higher rates to invest in their networks, not just pad their profits. But with rural and remote communities still woefully under-connected and the recent Rogers outage that affected internet, cell service, Interac and even 911 services across the country, it’s hard to see much proof of investment.

Meanwhile we had to make cuts to our already lean budget, raise prices during the pandemic and halt the expansion of our low income program, just to keep going.

As part of our 30th anniversary, we have been collecting PERSPECTIVES ON THE FUTURE OF DIGITAL EQUITY from a range of Canadian experts. Like us, many of them are worried about where things are headed unless the government takes action now.

“We’ve literally spent two decades talking about the necessity of ensuring universal access to affordable broadband and yet it still hasn’t happened….I think it starts with leadership at both the political and regulatory level,” said University of Ottawa law professor Michael Geist in his TIME CAPSULE CONTRIBUTION.

As such, we call on François-Philippe Champagne, Minister of Innovation, Science and Industry of Canada, and the rest of the government to live up to their new telecommunications policy directive, instituting fairer wholesale rates and full access to fibre-to-the-home networks.

National Capital FreeNet hopes to be around for another 30 years, ensuring digital equity and affordable access in our community.

We look forward to a future where we can help connect everyone in the National Capital Region and where other community-based internet providers can grow to serve their own communities alongside existing providers. But this future is impossible without government support, fair regulations, and public attention.