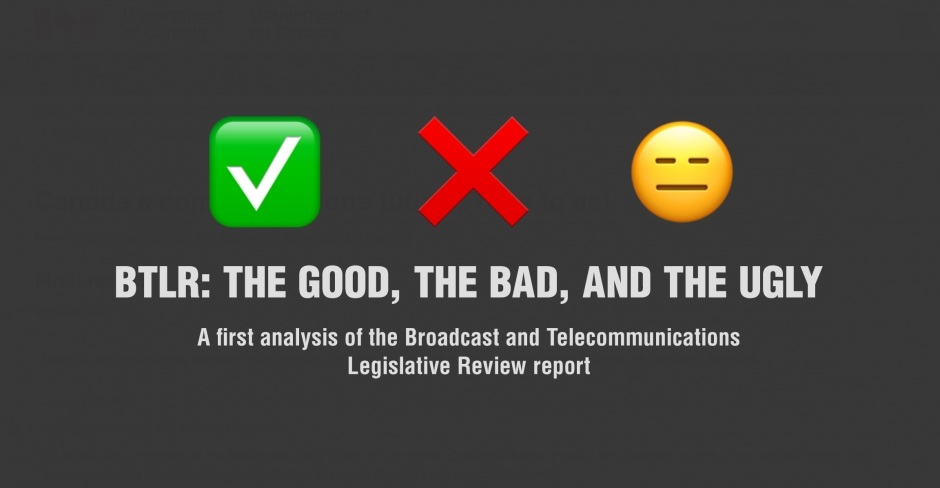 The BTL…What? What is the BTLR report and what it means for the future of our Internet

The report grants the CRTC far-reaching powers over media, but fails to provide systemic solutions to the issue of telecom affordability and access.

The long-awaited report from the Broadcast and Telecommunications Legislative Review Panel is finally out!

This panel was established in June of 2018 to propose updates to Canada’s media and telecommunications regulatory framework. After a long wait, we can finally see what changes they have recommended... and frankly, we’re concerned.

The report lays out close to a hundred recommendations on how Canada can modernize everything from the way we access the Internet to how we produce and consume media. If implemented, the panel’s recommendations would completely overhaul the regulatory framework that controls how we interact with the Internet. What would Canada’s internet look like in a post-BTLR adoption future?

While there are some praise-worthy recommendations around broadband access and net neutrality, the overall picture is of worrying regulatory overreach that could have a major negative impact on the way we consume media in Canada. Despite some good intentions, the review panel seems to be trying to shoehorn 20th century regulations that worked in traditional broadcast media to the wider Internet landscape, with awkward results. The end result would be a government regulator with unprecedentedly broad powers to register and regulate all kinds of media, from streaming services like Netflix, to news aggregators like Google News, within Canada and operating here from abroad.

To better understand the recommendations, we asked our campaigns team to break down the good, bad and ugly amongst them.

The report makes a number of recommendations to increase internet access across the country, most importantly recommending that the Telecommunications Act include universal broadband access goals. This includes a new priority on access for people with disabilities, as well as rural, remote and Indigenous communities.

The report also recommends increasing investment into underserved areas by expanding the scope of companies that contribute into the Broadband Fund, which funds many initiatives in rural and remote communities.

Some recommendations also give the Canadian Radio-television Telecommunications Commission (CRTC) more power to set wholesale rates for broadband and wireless Internet, which opens the door to the possibility of more competition in the form of virtual network operators - independent telecom companies that buy wholesale network access from established companies and resell it to customers.

Disappointingly, the report lacks details on specific policy and funding commitments to achieve universal broadband access or affordability. We were left with the impression that the bulk of the panel’s attention was focused on Canada’s cultural industries, rather than on Internet access and affordability.

Another welcome recommendation in the report is Net Neutrality protections being added to the Telecommunications Act. This would give the CRTC the responsibility to ensure open access to the Internet, and gather information about network management practices from ISPs.

That said, we have some concern that the report recommends eliminating the term ‘common carrier’ from the Telecommunications Act in favour of more specific alternatives. We believe the government should not be too hasty in dismissing the historical and legal precedent of even-handedness attached to the ‘common carrier’ concept, which remains relevant to preserving Net Neutrality.

We were pleased to see that the panel acknowledged what the OpenMedia community has long been saying: Canada’s privacy laws are “no longer suited to the present-day environment” and are in desperate need of an overhaul.

To address this, the panel recommends an upgrade to both the Telecommunications Act and the Broadcasting Act, making protecting Canadians’ privacy a stated objective of both acts. The panel also recommends amending the Personal Information Protection and Electronic Documents Act (PIPEDA) to be in line with emerging global privacy and data-handling standards – Europe’s General Data Protection Regulation (GDPR) cited as one of them.

The impacts of Big Data on privacy were also assessed in this review. Their report recommends having StatCan, the CRTC, the Office of the Privacy Commissioner, and others examine the use of Big Data by platforms and identify potential threats to privacy. The CRTC is encouraged to intervene “as necessary” where communication services fail to meet the objectives set out by the Acts under review.

Beyond recommending amendments to the laws that govern Canadian’s privacy, however, the panel does not put forward specific implementation recommendations to ensure Canadians’ privacy is safeguarded in our telecom environment.

A restructured and rebranded CRTC, renamed the Canadian Communications Commission (CCC), would have broader powers to regulate everything from what appears on Netflix, to impose levies on social media platforms aimed at funding journalism.

The report is recommending that online content producers with “significant” revenues in Canada - a still to-be defined standard - be forced to register with the CCC, dedicate a portion of their revenues to Canadian content or risk paying a special tax, and highlight Candian content on their platforms. While the review panel insists it will not impose a “Netflix Tax”, the requirement for media companies to spend a portion of their revenue on Canadian content may lead to higher costs, which could be passed on to consumers in the form of higher subscription fees.

News aggregators and sharing platforms, like Yahoo! News or Facebook, would be forced to contribute to Canadian content development in the form of a levy applied to their revenue. They would also be required to highlight Canadian content on their platforms, in a manner to be determined by the CCC.

Ultimately, the CRTC – or CCC as it would be called – would become a powerful regulatory body with wide-ranging powers to determine what the media landscape will look like in the future.

The Link Tax in Canada?

While the review panel was keen to say it would not impose a Netflix Tax and there are no mentions of broadband volume taxes or smartphone taxes – along the lines of what was discussed when the Copyright Act was under review–, they did recommend a form of Link Tax, which should be of concern.

A Link Tax has been attempted in other jurisdictions, most famously in the European Union, as a way to tax content aggregators, like Google and Yahoo! to “support” journalism. However, Link Taxes have backfired massively –some of the most notorious cases being in Germany and Spain, where the Link Tax hit small publishers disproportionately hard. Google News eventually decided to close shop in Spain due to the disproportionate burden of the tax.

In Canada, the review panel is suggesting that content aggregators and sharing platforms be taxed on their advertising revenue to fund an arms-length body that would support the production of news. On top of that, these platforms would have to highlight Canadian content on their platforms. How exactly that would be enforced is yet to be seen.

While this proposal may have good intentions, it is likely to have serious negative impacts on innovation and media concentration. As costs are added for content aggregators and sharing platforms, independent or alternative platforms may not be able to compete under the new regulatory regime. This could lead to higher media concentration in industry giants like Google, Yahoo! And Facebook.

The review panel came out in favour of introducing legislation to hold platforms –or “digital intermediaries” such as Facebook, Twitter, YouTube, and others– liable for hosting or aiding in the amplification of what they deem “harmful content”. In so many words, the panel recommends that “media content undertakings should have a responsibility for the media content they provide.” However, the panel did not expand on the extent of these responsibilities or put forward enforcement recommendations in a way we could assess in terms of how these added responsibilities would play out upon implementation.

The lack of concrete definitions as to what constitutes harmful content should raise some concern, as regulations with similarly broad definitions have already proven effective in curtailing freedom of expression online, effectively breaking the open Internet we once knew.

Notably absent from the report were any recommendations to tackle Canada’s unusual telecommunications market concentration by addressing one of its core causes, vertical integration - the embedded power derived from a company owning both the “pipes” of the internet and the content that runs through them. Without addressing this root cause, we are concerned we will see little progress in tackling the stranglehold that Big Telecom has on the Canadian media and telecommunications market.

Another curious absence was the lack of concrete solutions to the affordability problem. While the report acknowledged that we have one of the most expensive Internet and mobile markets in the world, the report had little to say about how to address the problem aside from some general remarks about giving the CRTC powers to manage wholesale prices.

A small promising sign is its recommendation to entrust the CRTC with the obligation to ensure “justness and reasonableness of rates that prevail in the market.” But beyond recommending the CRTC be given more power to set wholesale rates, the panel did not provide any more mechanisms to break up the control the Big Three have over pricing.

Furthermore, there is no proposal to create low income subsidy programs similar to the Lifeline program in the United States. These programs ensure that low income and other vulnerable members of our society also have access to basic telecommunications services that are essential for economic development in this day and age.

Another glaring omission from the report was recommendations to strengthen consumer protections for Internet and cell phone users. The Big Three are infamous for their poor treatment of consumers. From aggressive sales tactics to misleading advertising and draconian overage charges, most Canadians have learned to have little trust in our telecom providers.

Despite this, the panel failed to provide any concrete proposals to address systematic abuse of our lax telecom consumer protections, which currently put the burden of proof on consumers and have notoriously low penalties. This failure is unfortunately not unique to the BTLR; the report came out two days before the Internet Code of Conduct was set to come into force, which has also been criticized for failing to address many issues consumers have complained about.

The panel’s recommendations contained a few wins for our rights on the internet, but were a net disappointment, with the bulk of its energy concentrated on defence of entrenched interests, not the average person in Canada. If all recommendations were accepted, we believe the Internet as we know it in Canada would change dramatically, likely for the worse. The CRTC was the big winner in this report, with the panel recommending it be given a plenitude of overreaching powers over the Internet in a way that raises concerns not just for those fighting for a free and open Internet, but for Canada’s obligations to the Charter of Rights and Freedoms and trade agreements with our partners.

We look forward to seeing how the federal government will respond to this aggressive package. It will be difficult, to say the least, for the new government to pass all these recommendations through a minority parliament, especially when you take into account the opposition many recommendations will likely receive from tech giants like Google and Facebook - and that may be for the best.

Despite these disappointments, you can be sure that OpenMedia will continue to campaign and bring your voices to decision-makers, doing our best to ensure their next steps are informed by the need to make the Internet and our telecommunications systems open, affordable, and surveillance free.