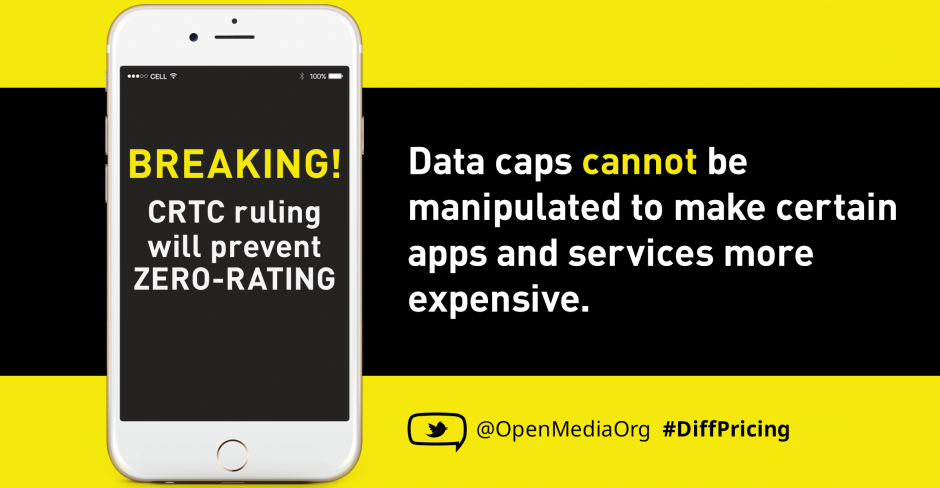 The Canadian Radio-television and Telecommunications Commission (CRTC) has issued a framework designed to prevent telecom providers from engaging in harmful zero-rating, the practice of selectively pricing certain apps and services by not counting them against a customer's data cap. The ruling strengthens Net Neutrality in Canada, and will shape how Canadians use the Internet for years to come.

We welcome the ruling, noting that telecom companies use zero-rating schemes to artificially pick winners and losers online, and to deflect pressure from customers for larger and more affordable data caps, or an end to data caps altogether. We campaigned for an end to zero-rating and data caps throughout this proceeding, and while the CRTC could have gone further, today’s ruling is still a very positive step in the right direction.

Zero-rating is anti-competitive, bad for consumers, and harms innovation in our digital economy. While Canadians still want to see data caps abolished, we are pleased to see the CRTC plant a flag that will prevent Big Telecom from exploiting data caps to pick and choose winners and losers online.

This will ensure ISPs are unable to act as gatekeepers, and shows Canada continues to be a global leader on net neutrality. With the U.S. having just backed away from its own investigation into zero-rating, and the future of its net neutrality rules hanging in the balance, Canada looks like an increasingly attractive place to foster innovation online.

Today the CRTC also issued its determination on Videotron’s controversial Unlimited Music service, ruling that the service is anti-competitive and violates net neutrality under Section 27(2) of the Telecommunications Act, by “giving an undue preference to certain consumers and music streaming services, while subjecting other consumers and content providers to an unreasonable disadvantage.” Videotron must bring its program into compliance with the new framework within 90 days.

The CRTC ruling came after an extensive consultation process, including public hearings in Ottawa last October. Our extensive submissions urged the CRTC to “Listen to Canadians, aim higher, and protect innovation for all.” Our key arguments include:

A CRTC report last year revealed that the average amount of data downloaded by Canadians has skyrocketed, increasing 40 per cent from 2014 to 2015.

The recent federal budget promised a sweeping review of Canada’s digital policies, prompting concerns from experts that our strong Net Neutrality safeguards could be impacted or undermined.

Over 55,000 Canadians signed our petition asking the CRTC to ban zero-rating and to end data caps.