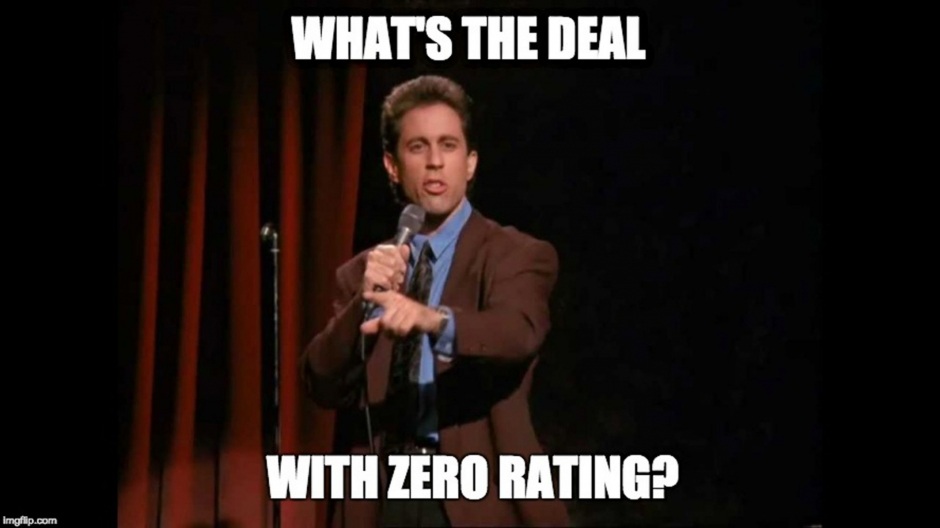 What the heck is zero-rating and how does it undermine Net Neutrality?

The rise of a controversial practice called ‘zero-rating’ has Internet freedom advocates worried about the future of the open Web and innovation. Find out why.

This choice is what, for many, makes the Internet far better than cable TV, and is a big reason why more individuals are choosing to cut the cord altogether. Why watch what is prescribed for you by companies with their own best interest at heart when you can curate your own Internet experience, travelling an endless highway of links, and perhaps discovering a new interest or passion in the process?

But the Internet is slowly becoming a lot more like cable TV through the use of a sly practice known as zero-rating. Let’s dig in.

Zero-rating is when network operators or ISPs exempt certain online services from counting toward your data cap. It’s that simple.

Most of us with mobile phones pay to use the Internet on our phones according to how much data we use. Zero-rating, which is frequently implemented on mobile services but also on broadband Internet, essentially gives users access to certain online services and websites free of charge.

It sounds good, doesn’t it? Who would turn down free access to popular services, especially when online content providers are scrambling to find new ways to monetize their content. And sure, it might seem like a good deal on the surface. But when you take a closer look, what we’re actually doing is letting big companies choose the winners and losers of the Internet.

Or as Barbara van Schewick, Director of Stanford Law School's Center for Internet and Society, noted in a paper earlier this year on T-Mobile’s zero-rated Binge On service:

...it feels good in the short-term but harms consumers in the long run.

Generally, organizations in countries with fairly developed Internet infrastructure that are zero-rating are doing it for one of two big reasons: they’ve been paid by another company to offer their content for “free,” thus getting it in front of more eyeballs, or they’re a vertically-integrated company that also owns a service that they want to promote.

And then there are broader, and arguably more exploitative, examples of zero-rating, like Facebook’s ‘Free Basics’ (the artist formerly known as Internet.org) which offers a suite of free websites and services through a mobile app. Free Basics has been aggressively deployed in the global south, India, and Africa where Internet infrastructure is just now catching up in its development, and many people remain disconnected. It was so poorly received in India that the media regulator, TRAI, effectively banned the service, arguing it is a violation of Net Neutrality. (They’ve also recently opened up a public consultation on this very issue.)

Open Web experts have also argued persuasively that Free Basics is just another example of problematic walled gardens online, where individuals are knowingly or unknowingly restricted to one corner of the Web, experiencing the Internet through Facebook-coloured glasses.

By now you’re probably familiar with the concept of Net Neutrality, or the principle that all Internet traffic should be treated equally. It’s such a key concept to Internet governance that many countries have enacted Net Neutrality regulations on a national level, and many who have not are considering it.

In the U.S., open Internet advocates are pushing to have the Federal Communications Commission (FCC) formally investigate zero-rating. And, here in Canada, the Canadian Radio-television and Telecommunications Commission (CRTC) recently announced a crucial consultation on this issue - and we’ll reveal more on how you can get involved in that very soon, so stay tuned!

A big part of the reason why zero-rated services are so controversial is because of the way many of us pay for Internet access. The problem arises when you combine zero-rating with oppressive and unreasonable data caps; what you’re left with is a toxic brew for Internet freedom.

For example, if you’re an Internet user whose ISP zero-rates a video streaming service, say, Netflix, how likely are you to use that service over one of the many other existing or yet-to-be-developed streaming options? In this way, not only is your ISP pushing you toward the service of their choice – possibly because of an explicit agreement they’ve made with this company – but they’re also threatening to kill innovative new services that may never emerge because everyone is chasing the best deal.

Some will ask, how is this different from any other deal that a company or partnership of companies might offer me? Is it worse? The short answer is that Internet access isn’t like a combination pizza hut and taco bell. It’s not like offering a chance to win a free cruise with your purchase of a Toyota. The Internet is where we engage in political and social discourse, where we do business, share art and culture, and reach for our full potential. Any practices that restrict our ability to reach out to each other in new ways, centralize power in the hands of the already powerful, and limit the choice of individuals online should be viewed with skepticism.

As the EFF writes:

By turning service providers into gatekeepers – even benevolent ones -- zero-rating helps transform the Internet from a permission-less environment (in which anyone can develop a new app or protocol and deploy it, confident that the Internet treats all traffic equally) into one in which developers effectively need to seek approval from ISPs before deploying their latest groundbreaking technology.

The bottom line is this: zero-rating has huge potential to stifle innovation, and gives the upper hand to large, vertically-integrated services, contravening our concept of an open Web. We can do better.