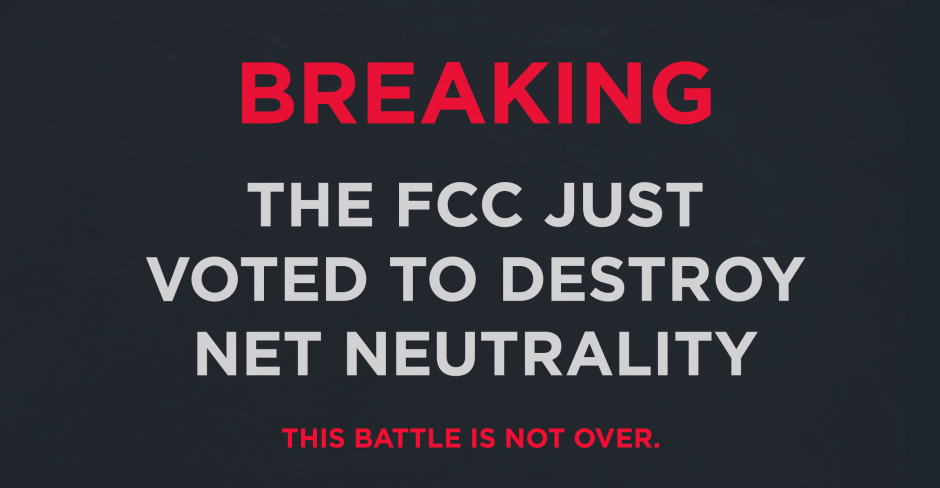 Canadian Internet users and businesses will feel the impact of this vote on their pocketbooks, with a loss of innovation and potential harm to policies here at home

The United States Federal Communications Commission (FCC) has just voted to repeal the 2015 Open Internet Order, which established Title II Net Neutrality protections for consumers. Today’s decision represents a shocking abdication of the FCC’s responsibility over telecommunications and consumer protection, leaving Big Telecom in complete control over what citizens can do and see online.

The Internet doesn’t have borders. There’s no doubt today’s vote will impact us here in Canada.

Even though the ruling applies to Internet service providers in the United States, many of Canadians’ favourite services are located in the U.S. — Google, Facebook, Reddit, Netflix — and if they’re forced to pay so that their services aren’t slowed down, or blocked completely, they’ll pass that cost straight down to their users, regardless of where they are.

The decision is a significant blow to the future of the Internet, free expression, democracy, and innovation everywhere. The FCC’s new framework allows U.S. Internet service providers (ISPs) to demand fees for prioritization, to throttle content and to even block websites outright  — be they from competitors or because they don’t like, or don’t approve of, the content.

Today’s vote is a needless assault on the Internet that billions of people across the world have come to depend on. Internet users gravitated online because of the freedom and openness it provides — not because they’re looking for another version of Cable TV. The FCC’s plan turns the Internet’s level playing field into a tiered system with fast lanes and slow lanes — further separating those who pay, and those who can’t.

Reversing Net Neutrality will also deeply harm the innovation the Internet has been known for from its inception. Small businesses and entrepreneurs with great ideas will no longer be able to compete on the merit of those ideas, instead corporations and favoured business partners of ISPs will have their web traffic prioritized, and medium-sized and smaller competitors will be slowed down or outright blocked completely.

This means that the next revolutionary idea — the next Facebook, the next Netflix — will likely never be able to get off the ground. The loss of Net Neutrality will have a slow, insidious impact on the innovative spirit we’ve come to expect, and love, from the Internet.

The repeal of Net Neutrality has been slammed by both Republicans and Democrats in the U.S. Just this week a new poll was released showing that 83 per cent of Americans oppose the plan.

In Canada, the Liberals, Conservatives and New Democrats have all declared their support of Net Neutrality, cementing that an open Internet is a non-partisan issue. The spirit of Net Neutrality is protected in Canadian law within the Telecommunications Act and through many of the Canadian Radio-television and Telecommunications Commission (CRTC) decisions. This includes an April ruling that banned zero-rating — the idea that ISPs can’t pick and choose what counts against customer’s data caps — and a December, 2016 declaration that broadband Internet is a “basic service.”

Canadian Heritage Minister Mélanie Joly has also announced that in 2018, the Telecommunication Act and Broadcasting Act will also be reviewed, which could have far-reaching implications on Canada’s Net Neutrality laws.

Almost 20,000 Canadians submitted comments to the CRTC demanding that an open Internet be at the heart of all our future communications policies, at act.openmedia.org/TheOpenInternet. Canadians also led on the more than 20,000 signatories to Congress to keep the United States’ existing Net Neutrality rules at act.openmedia.org/WorldForTheWeb.