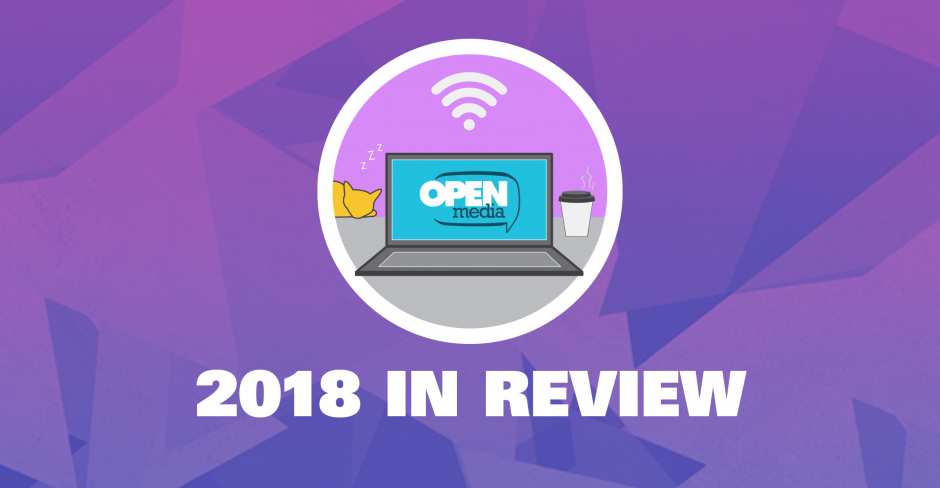 Together We Accomplished a Lot: 2018 Year in Review

As the new year begins we look back at everything we’ve accomplished together in 2018 for online access, privacy and free expression. None of this would have been possible without our amazing community — THANK YOU!

As we kickstart the new year after the holidays, we have a longstanding tradition of looking back to all that we've accomplished to defend digital rights over the past year — in big part, thanks to people like you!

From defeating Bell’s nationwide website blocking proposal at the Canadian Radio-television and Telecommunications Commission (CRTC), to making headlines by bringing your questions to Cambridge Analytica whistleblower, Christopher Wylie’s testimony before Parliament, to rallying hundreds of thousands to speak out against the secretive and undemocratic NAFTA renegotiations; we’ve sure had our hands full fighting for digital rights last year.

But as another year goes by there is one thing that hasn’t changed — and that’s the incredible support from our growing pro-Internet community, who is the backbone of all of our hard work. Thank you so much for being a part of this movement. We couldn’t do any of it without support from thousands of people like you!

Now, let’s take a look at some of our biggest achievements in 2018 across our three pillars of the open Internet: Access, privacy and freedom of expression.

Be sure there will be no shortage of battles to take on in 2019, but we know we can count on you to stand with us. We're gearing up to keep up the progress we've made and we are really excited about a new project we'll be launching in early 2019 to build Canada's first national broadband strategy. So stay tuned!