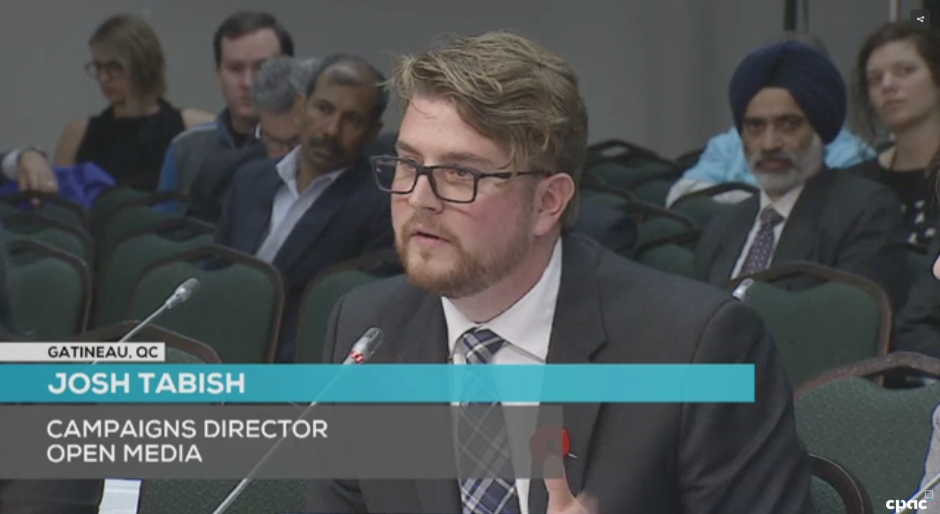 Today is my last day at OpenMedia

Since 2013, I have had the privilege of representing OpenMedia’s community on digital issues that matter to them. But now I’m starting a new chapter.

When I started working at OpenMedia, I had no idea that our community would go on to achieve what it has. That’s why, with some difficulty, I am writing today to let our community know that I am leaving the organization I’ve called home for the past four and a half years.

Today is my last day, and I cannot possibly express how grateful I am for the opportunities and experiences I have gained at this organization. My work has been deeply rewarding and meaningful – a privilege too few have in their jobs.

Since January of 2013, I have worked my hardest to ensure every member of OpenMedia’s community had their voice amplified on issues of Internet policy that they care about. And in the process, we managed to build one of the largest and most highly-engaged digital rights communities in the world.

Throughout this time, I did my best to establish OpenMedia.org as a timely, compelling action platform across all three pillars of our work: privacy, access, and free expression. And, in doing so, we managed to strengthen our advocacy by building strategic partnerships and collaborations with allied organizations around the globe.

For me personally, this provided the opportunity to collaborate with some of the most strategic, creative, and intelligent people I’ve ever met – and I want to thank a handful of them here.

Steve Anderson, who took a risk on me in the first place and taught me the ropes of digital campaigning. Laura Tribe, my most important editor and critic. David Christopher, my right-hand man in the trenches every single day. Meghan Sali, one of the most passionate people I’ve worked with and someone who was always willing to pitch in wherever she could add value. Cynthia Khoo, our external counsel who started as a volunteer and boomeranged back after she’d “lawyered up” to help us achieve some of our biggest victories.

My campaigners; Katy Anderson, Ruth Coustick-Deal, and Victoria Henry who inspired me with their curiosity and creativity at every 8AM stand up. Alana, whose quirks and vulnerability invited me to be a better version of myself. Jes and Krusheska who kept the lights on and WiFi functioning. Marie, Marianela, Aleks, Salil, Alan, and Mazdak who were on the frontlines engaging our community and making sure their voices and contributions were counted. And of course our Board, including the ever-inspiring Susan McLennan, Shaun Murphy, Scott Leslie, and Phillip Djwa.

People outside the organization who helped enrich our thinking, strategy, and, approach include (in no particular order): Dr. Kathleen Cross; Alyssa Moore at Cybera; Ben Klass and Professor Dwayne Winseck at Carleton; Professor Catherine Middleton at Ryerson; David Ellis at York; Professor Fenwick McKelvey at Concordia; Gabe Blanchard; the one-and-only Jean Francois Mezei,; Professor Michael Geist at the University of Ottawa; my co-conspirator Dr. Reza Rajabiun; “the great Tamir” Israel at CIPPIC; Matt Wood at Free Press; Holmes Wilson, Tiffiniy Cheng, and Evan Greer at Fight for the Future; Professor Barbara van Schewick at Stanford; Jeremy Malcolm at EFF, David Segal at Demand Progress; Joe McNamee at EDRi; Tim Vollmer and Kelsey Wiens at Creative Commons; Byron Holland and the team at CIRA; former CRTC Commissioner Timothy Denton; Matt Lockshin and Vanessa Chase Lockshin; Jacob Glick; Geoff White, formerly of PIAC; John Lawford and Alysia Lau of PIAC; Rob McMahon and the First Mile Connectivity Consortium; Brett Gaylor and Vojtech Sedlak at Mozilla; Burcu Kilic at Public Citizen; Joshua Lamel at Re:Create; Gus Rossi at Public Knowledge; Chris Bowers and Rachel Colyer at Daily Kos; the whole team at the BCCLA; Tom Henheffer and the team at CJFE; Professors Stuart Poyntz and Bob Hackett at SFU; David Barsamian of Alternative Radio; and many many others who I am sure I have missed in this list, but to whom I am deeply grateful.

It is a difficult time to step away from OpenMedia. Our digital rights are being attacked on all fronts. From Ajit Pai’s reckless plan to destroy the open web in the U.S., to the EU Commission’s wrong-headed Link Tax and Internet censorship proposals, or the forthcoming battle over C-51 reform here in Canada, the open Internet needs our help.

I’ve said this elsewhere before, but the rules we choose to govern the Internet will have a major impact on the type of society we aspire to.

From its inception through to the present day, the Internet has always promised to level the playing field – to improve access to knowledge, provide new economic opportunities for a burgeoning class of innovators and everyday citizens, and counter the media monopolies of the 20th century, ushering in an era of genuine and authentic choice.

But these promises were never guarantees. This is why the fight for the open web is, essentially, a fight for Internet freedom, and the fight for an open society that allows each of us to reach our fullest potential. And we think those are promises worth fighting for.

I know that OpenMedia will continue to be the amazing and impactful organization it has developed into, and I am honoured to have played a role in that development. When I started, I was the fifth person ever hired. When I left, I was one of seventeen full-time staff. That was a tremendous amount of growth for our scrappy non-profit, and I am really proud I was able to help scale us up to have more impact across a wider range of issues.

There are moments where I worry about OpenMedia, and fear that, perhaps, I have not done enough. But I can rest assured knowing I am leaving the organization in the trusting hands of our Executive Director, Laura Tribe, whose leadership fills me with the utmost confidence.

In the meantime, you can follow me on Twitter @jdtabish. I look forward to keeping you in the loop on what comes next.