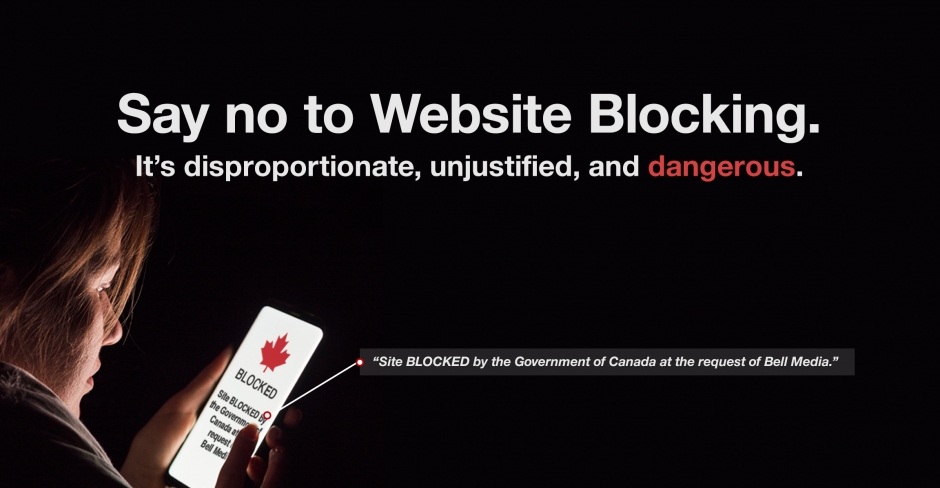 The reboot no one asked for: Trudeau is reviving “FairPlay”, Bell’s failed website blocking plan

The CRTC rejected a Bell-backed coalition’s website blocking proposal in 2018 after massive public outcry. Now, the federal government is bringing it back — and putting our online freedoms on the line.

While debate over Bill C-10 is still dominating the public conversation, another disturbing piece of Internet policy has quietly emerged from the federal government: a grab for website blocking powers.

On April 14, the federal government launched a “Consultation on a Modern Copyright Framework for Online Intermediaries”. In the policy paper for the consultation, the government proposes giving itself sweeping censorship powers to demand our ISPs and other online intermediaries — folk like our libraries, universities, and online platforms — block access to websites through their services.

And that’s just to start! The proposal goes on to suggest stripping many of the legal protections intermediaries currently enjoy if their services are used to improperly link to or access copyrighted content, and helpfully suggests ISPs suspend our Internet, or even ban us permanently from their platforms if they’re concerned about their increased legal risk. All this, any time that litigious rights holding companies like Bell, Disney or Corus Entertainment claim anyone using our Internet connection has improperly accessed their copyrighted materials.

These proposals are disproportionate and unjustified by the limited scale of copyright infringement in Canada, and deeply open to abuse. The reality is that online violation of copyright is a limited and shrinking issue in Canada — most people prefer paying for creative content most of the time, when rights holders offer a reasonable way to do so. But this idea to shut off parts of the web at the whim of copyright giants didn’t come out left field. In fact, Bell has put forward different versions of this website blocking proposal — ironically dubbed “FairPlay” — repeatedly for many years, including at the CRTC, during NAFTA renegotiation, during the government’s BTLR review, and during previous copyright consultations. Every level of government has so far rejected their proposals - but that might be about to change.

So why are they so interested in this? The average person might not be fully aware that Bell Canada Enterprises Inc., or BCE, is into more than just the telecom business. Bell Canada is also a massive copyright holder over both domestic and foreign content— one of the biggest in our country. Through their subsidiary Bell Media, they own a plethora of household media brands, like CTV, Virgin Radio, and CraveTV.

That’s why Bell Canada has led on putting together a coalition of organizations to request the CRTC implement a website-blocking system to “curb piracy”. Bell’s coalition wanted the CRTC to create an official Internet agency responsible for maintaining a list of websites that ISPs would be required to block access to, without court oversight.

Let’s look at how things went last time. Back in 2018, FairPlay was widely slammed by civil society groups, ISPs, tech companies, academics, lawyers and experts. Like today, it was judged both overreaching and unnecessary, and likely to result in sweeping Internet censorship, penalize everyday online activities, and threaten Canada’s Net Neutrality rules that keep the Internet a level playing field for everyone.

On February 28, 2018, these concerned groups came together with community members for the first national Day of Action against website blocking. Digital rights groups, library associations, independent Internet service providers and civil liberties organizations all participated in the day, demonstrating strong support for Canada’s existing copyright laws and net neutrality protections and opposition to copyright giants’ attempts to control what Canadians can and cannot do online.

And that wasn’t all. As part of the CRTC’s proceeding on FairPlay, members of the public submitted over 6,200 direct comments to the regulator, and more than 28,000 submissions from OpenMedia community members were filed alongside with OpenMedia’s intervention!

After this huge push from Internet advocates, experts, and community members from across the country, the CRTC rejected Bell’s FairPlay proposal, sending it to the graveyard for good — or so we thought.

In 2021, thanks to Prime Minister Trudeau’s censorship-laden, industry friendly Internet regulatory agenda, FairPlay is back.

Luckily, unlike with Bill C-10, we’re actually getting a proper public consultation on this website blocking proposal where you can raise your voice in opposition. People across Canada are speaking up to tell the government to stop this censorship power grab. But the consultation is only open for comments until May 31st — so add your voice while you still can!

That’s no justification for giving this kind of sweeping power over what we see online to the federal government and Big Telecom. If we swamp the website blocking consultation RIGHT NOW urging the government to drop this censorship scheme, we can stop it in its tracks — just like in 2018.

On May 27, 2021, join us for a National Day of Action against website blocking! To stay updated on how you can take part, take action via our email consultation tool, if you haven’t already!