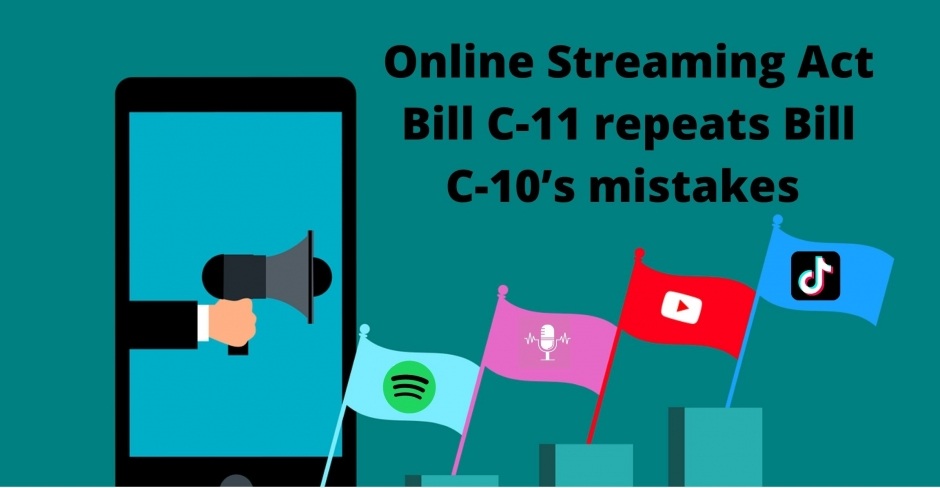 The government reintroduced Bill C-11 and it's still a mess

New Canadian Heritage Minister Pablo Rodriguez has now reintroduced a new version of 2021’s Bill C-10, the government’s controversial effort to update the Broadcasting Act and treat the Internet and everything on it with the same tools as offline broadcasting activity. Now known as the Online Streaming Act and re-numbered Bill C-11, the new initiative patches some of Bill C-10’s mistakes, but continues many of its faults. It continues to permit the CRTC to manipulate our feeds on platforms, showing some content while hiding others, and shuts out small online content creators from its support.

Let’s review some history. Last year’s bill was flawed from the start, but became highly controversial after a late-stage amendment brought all user audiovisual posts on the entire Internet under the regulatory control of the CRTC. The government is now saying they’ve fixed that mistake - but have they?

While some issues seem to be addressed by Bill C-11, many have not. Let’s go on a deeper dive into the current state of the proposal, and see where the remaining problems lie.

One important note: while Heritage is setting forth some guidelines in Bill C-11, many key questions of how the Bill will be implemented, will be established later on by the Canadian Radio-Television and Telecommunications Commission (CRTC).

A bit of good news first - Section 4.1 is (mostly) back! This was the infamous clause removed last year which excludes user audiovisual content from being treated as a program, so our content online won't be regulated by the CRTC. Section 2.1 also continues to prohibit users themselves from being treated as broadcasters; as a result, most of us will not personally be regulated by the CRTC.

But hold the celebration: coupled with the new addition of Section 4.1 (2), many users may be left in a gray area. This clause gives the CRTC additional regulatory authority to determine who is classified as a broadcaster. Minister Rodriguez has given the CRTC 3 factors to take into consideration when determining what can be regulated and what is considered a program, though their relative weighting is very unclear;

Through using these criteria, the government is hoping to establish a clear separation between what they consider professional/commercial content and amateur content. But whether a clean distinction of this type really exists on the Internet is very unclear.

To give one example, podcasting is one of the richest spaces for user online expression, containing professionally produced content from traditional media outlets, multi-million dollar earning independent content from lone creators, and startup basement podcasts securing their first sponsor. All of this content is posted on platforms that would be classified as ‘broadcasting’ like Spotify; all earn revenue; and all have unique identifiers of some kind.

Algorithms are still fully up for manipulation

The government has implemented an odd ‘fix’ that appears to address some of the concerns surrounding discoverability and algorithmic manipulation, but does nothing of that kind. Under Section 9.1(8)  of Bill C-11, the government proposes to bar the CRTC from explicitly requiring platforms to use a particular algorithm or source code to construct their feeds.

But wait – the CRTC still has the authority and the mandate to require the outcome from platforms of inserting officially recognized “Canadian” Content– commonly referred to as CanCon– into our user feeds, instead of other content.

This is a purely cosmetic fix. No one we know of thought the CRTC was going to be in the business of mandating a particular algorithm. The CRTC still can ask platforms for an end result, meaning it will still be in the business of picking winners who get promoted and losers whose content is downranked and hidden on online feeds. Unless and until CanCon definitions are thoroughly revised, this will mean upvoting the narrow range of legacy media content to the top of our feeds over other content we actually like.

This is also a good opportunity to point out how little sense putting a broadcasting lens on the Internet makes. The Internet at its best is about user choice and customization, not top-down content choices. We would have no issue with the CRTC giving people in Canada the *option* of subscribing to CanCon feeds, requiring platforms to offer CanCon tailored feeds on request.

An expanding user choices piece of legislation could go even further, giving us back more control over our own data that platforms hold. Legislation like this could not only give us options to add CanCon to our feeds, but also to see, edit and delete data platforms hold on us, and even make more of our own decisions about how their algorithms are used on our data.

But requiring that all audiovisual platforms must display CanCon across all our feeds misses the point. We are not being force-fed a single foreign stream of content by platforms, as Canadians were historically on broadcast television and radio. Every day we construct our own feeds around our preferences, in collaboration with algorithms.

Force-feeding us officially recognized CanCon content through C-11 is deeply disrespectful of our individual decision-making and preferences. And on a practical level, it will make our daily user experience worse in the many, many cases where officially recognized CanCon that meets our preferences for a given search, playlist, or feed does not exist.

CanCon guidelines will be updated: one day, somehow

There’s a huge and obvious piece missing from this picture - what exactly is CanCon in the 21st century? Our CanCon FAQ goes over the dismal status quo, but what to expect from updating CanCon isn’t something the government is giving much guidance on, passing it to the CRTC to redefine at an undefined future date.

We believe some clarity and direction must be given on how CanCon definitions will be updated from their 1980s state before Bill C-11 can properly be interpreted. Will online and independent creators who have been largely shut out of the current CanCon system benefit from the next iteration? We’re deeply concerned that Heritage Minister Rodriguez’s repeated insistence that C-11 “is not about” online creators suggests they will continue to be left out of future CanCon support. While broadcast standards should not be applied to online creators, they are becoming the primary source of producing and spreading our culture, and must be included to tell our story in the 21st century.

Creeping scope: why social media platforms and much more are still included

Minister Rodriguez has emphasized the need to regulate content that appears on more than one platform, including platforms that are largely professional content, and largely amateur/user-posted content. While this may make sense for big-name Canadian content producers like The Weeknd, small indie content creators could be impacted in a drastically different way when they post on multiple platforms under C-11. Even plainly amateur-driven platforms like TikTok feature revenue for creators, unique IDs for content, and clips of content that also appear on broadcast platforms. Will these also be subjected to regulatory oversight and be considered as professional content?

Early government documents for Bill C-10 detailed a wide variety of platforms to target, including video services that specifically provide culturally specific content like BritBox, sports services, services that host only podcasts, and more. If you're creating for a wide variety of platforms and multiple channels, like most independent content creators today, there is an excellent chance that you will in some way or another find your content defined and regulated as broadcasting. And you might find a surprising variety of your online partners forced to register with the CRTC, make contributions, and interfering with the discoverability of your posts.

Our core concerns are the same now as they were on 2021’s Bill C-10. Is user choice being respected by our government, or are they telling us what they want us to see and hear? Is the government designing a content system that will equally reward ALL Canadian creators, or are they planning to tax the Internet we love to support legacy media many of us don’t?

We want to see Canadian culture supported in the 21st century as much as anyone. But it should happen through fair mechanisms equally available to all Canadian creators, and all Canadian identities. We’re proud of the culture Canadians are already building on the Internet. While expanded government support would be welcome, we believe that our creators can and must attract Canadians by the quality of their work, not have the government force it on us whether we like it or not.

Implementing these values in Bill C-11 will require the government go back to the drawing board about who they’re actually legislating to do. Is the goal telling all Canadian stories in the Internet age, respecting our choices and meeting us on the online platforms younger Canadians increasingly prefer? Or is this a cash grab for failing legacy media, an attempt to turn back the clock and force outmoded broadcasting ideas of top-down government content selection? Their work is far from done, and shifting responsibility to the CRTC to define what kind of cultural storytelling will be supported will harm Canada’s creators and defeat C-11’s supposed positive intentions from the start.

Thousands of critics from the OpenMedia community, experts, academics, lawyers, and civil rights groups have already raised these concerns surrounding Bill C-11. Rather than giving the CRTC new powers to control what we see on the Internet, it's time the government acts on the advice of experts, reform their bill and balance the scales for content creators and users.