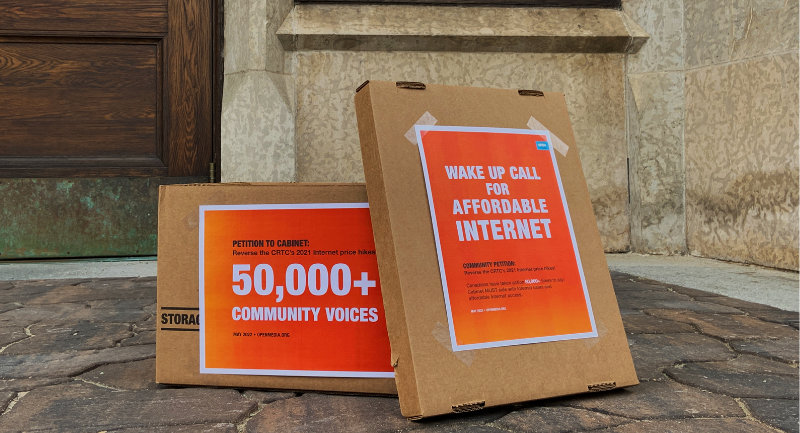 We just delivered the voices of tens of thousands of OpenMedia community members straight to our government. Our message? You work for Canadians, NOT Big Telecom! 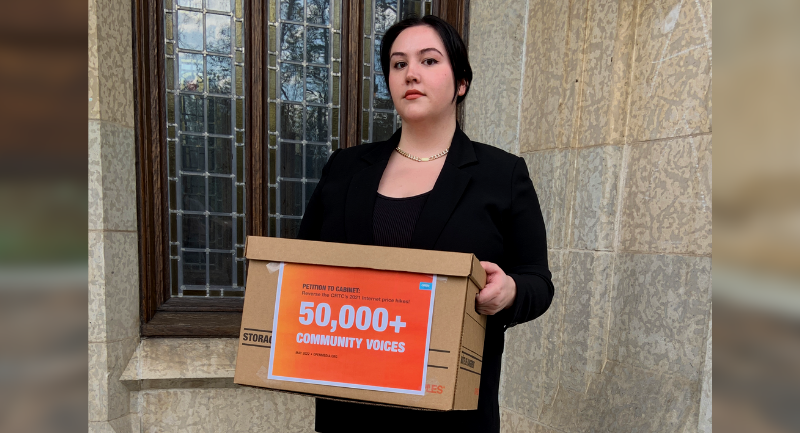 We’re FLOORED by our community’s hard work that made today’s delivery possible. To date, you’ve taken action over 50,000 times (!!!) to demand that Cabinet overturn the CRTC’s May 2021 Internet wholesale rates ruling.

Our delivery this morning included over 33,000 petition signatures urging the federal government to permanently reinstate the lower 2019 wholesale rates. In addition, we told Ministers that our community has sent nearly 17,000 combined emails to Cabinet and MPs to demand meaningful action toward affordable Internet and cell phone prices, starting with reversing the CRTC’s Internet price hikes.

Looking for more context? Read on!

Wholesale rates refer to the prices that smaller, independent Internet Service Providers (ISPs) like Teksavvy, Start.ca and Distributel have to pay big ISPs like Bell, Telus, and Rogers to access their networks and resell services to you and me.

The wholesale arrangement avoids having small providers duplicate existing networks, reduces Internet prices by enabling healthy competition, and guarantees that customers like us have the choice of several different service providers. The cost that smaller competitors pay for wholesale access has a direct impact on how much we as consumers pay for home Internet services.

Because Big Telecom has no desire to sell to these smaller providers (competitors who make it harder for them to price gouge!), the CRTC has been tasked with calculating fair wholesale rates. A fair rate for wholesale access is one that lets smaller providers compete, all while providing a healthy rate of profit to Big Telecom companies that own the networks.

In 2016, the CRTC set the interim Internet wholesale rates. The 2016 rates were set at a higher-than-anticipated level for the time being, while the Commission worked on analyzing what a fair rate should be. They were never meant to be permanent.

In 2019, the CRTC completed years of analysis and lowered Canada’s wholesale rates from the higher interim levels — a win for affordability and competition! They also ruled that small ISPs would be owed millions of dollars in back payments for what they’d been overcharged since 2016.

Many small ISPs immediately passed those savings on to their users, lowering Internet prices and driving up competition across the country. But Big Telecom appealed the 2019 ruling, throwing Internet affordability into jeopardy yet again.

Since the appeal, things have gone from bad to worse.

First, in August 2020, Cabinet announced that they thought Canada’s wholesale rates were too cheap and might “undermine investment” from telecom giants — a cowardly signal to the CRTC that they should side with Big Telecom and jack up the rates.

Then, like clockwork, in May 2021 the CRTC responded to Big Telecom’s appeal by pulling a nonsensical reversal and tossing ALL of its own work out the window. In the decision, the Commission rejected years of its own analysis to return to the extraordinarily high, never-meant-to-be-permanent 2016 wholesale rates. Smaller ISPs were also denied the millions of dollars in reimbursements from Big Telecom they were counting on — $$$ that would have translated into savings for customers.

As a result, Internet prices in Canada have risen even higher.

Smaller ISPs have since appealed, supported by civil society groups like OpenMedia and tens of thousands of community voices. Now, it’s up to Cabinet to decide: will they undo the Internet price hikes by rightfully reinstating the CRTC’s lower 2019 wholesale rates? Or side with Big Telecom yet again, doubling down on expensive bills at a time when Canadians are struggling to pay for basic necessities?

If you haven’t already, you can read today’s petition delivery in full by clicking here.

We could NEVER have made today’s petition delivery happen without you. Thank you for speaking out and being part of this campaign! It’s essential that Cabinet understands how the CRTC’s anti-consumer decision impacts everyday people and the future of Canada’s Internet.

Cabinet has until THIS FRIDAY, May 27, to make a decision. Until then, all eyes are on Trudeau and our Ministers; will they choose to sit by and do nothing, therefore siding with Big Telecom and the CRTC’s anti-consumer ruling? Or will they reinstate the lower 2019 wholesale rates, and prioritize affordable Internet access for Canadians?