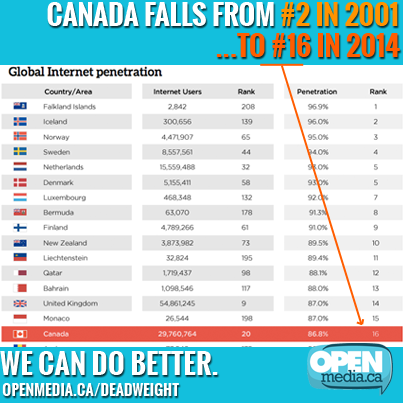 This week, experts at the Canadian Internet Registration Authority (CIRA) – the body that oversees Canada’s .ca domain – released their 2014 Factbook, which chronicles Canada’s advancement on Internet issues over the past year. The Factbook investigates how well-positioned Canadians are in the areas of access, cost, and usage. The report shows Canada continues to slip further behind our global counterparts. For example, Canada has crashed from 2nd place in 2001 on broadband penetration amongst industrialized nations to 16th place in 2014.

Tech journalist Peter Nowak has provided an excellent overview of CIRA’s report and the challenges Canada still faces when it comes to the digital divide. While we recommend you check out Nowak’s piece, we thought we’d pull out a few key quotes from CIRA’s report:

This report must make for depressing reading for a government that’s promised to lower prices and improve choice for Canadians. Despite the government’s rhetoric, the facts on the ground show Canada is falling further and further behind our global counterparts. This report underlines Canada’s national digital deficit and worrisome digital divide. What’s worse is we’re still moving in the wrong direction when it comes to affordability, with recent Big Telecom price hikes putting affordable wireless access even further out of reach of low-income Canadians.

It’s clear that there is still a huge amount of work to be done when it comes to getting quality Internet access to all Canadians. Broadband access in rural areas remains a major challenge, with many Canadians trapped in high-cost plans with ridiculously low monthly download limits. Meanwhile our dysfunctional cell phone market is holding back our digital economy and keeps many Canadians disconnected. Similarly, Canada is lagging behind in the area of e-commerce, with high costs and poor speeds likely keeping many out of the marketplace.

But we can change this. Let decision-makers know that it’s time to open our networks so that new and innovative providers can flourish. This would lower prices, improve choice, and rid our country of Big Telecom’s deadweight on Canada.

Speak out today at https://OpenMedia.ca/Deadweight