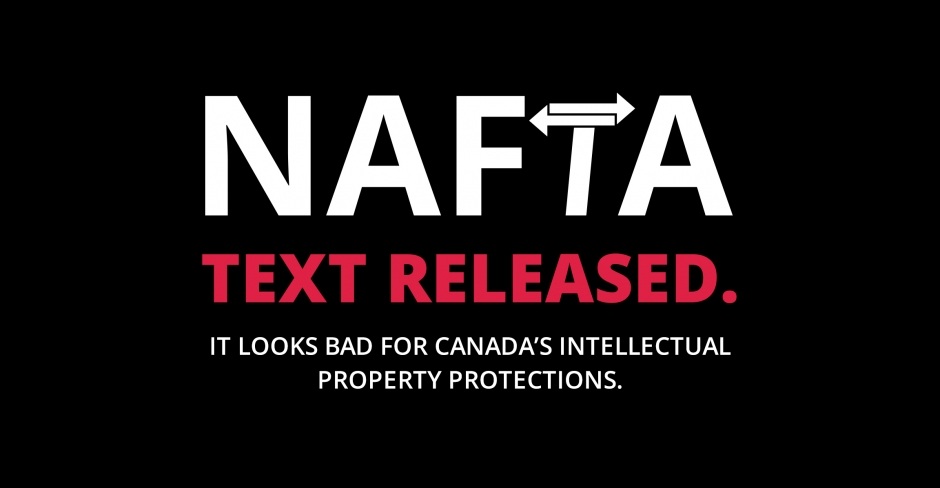 This is a terrible deal for Canadians. These draconian copyright provisions must be rejected.

Late last night, Canada agreed to the revised trade agreement with the United States and Mexico, now known as the United States-Mexico-Canada Agreement (USMCA). The deal contains many of the dangerous intellectual property and copyright provisions that Canada fought aggressively to keep out of the Trans-Pacific Partnership (TPP) –  a serious regression for Canada’s copyright provisions and digital future.

Chapter 20, Intellectual Property, is one of the most concerning sections of the deal. The new copyright provisions include mandatory copyright terms of life plus 70 years, bringing a 20-year extension to Canada’s current terms of life of the author plus 50 years. This will result in a significant cost for Canadian taxpayers, rob the public domain of new works for decades, and could raise educational costs by millions of dollars. The text also restricts a country’s ability to impose digital localization rules, which removes individual countries’ sovereignty over their people’s data.

Canadians will not sit idly by and watch our Internet be conceded by politicians trading horses. These kinds of digital policies do not belong in trade agreements. Canada is in the midst of of a national consultation on Canada’s Copyright Act, which has just been dramatically kneecapped with this agreement. The copyright reforms in this deal may be beneficial to corporate American rights-holders – but the Canadian government doesn’t work for them. This is a bad deal for Canada. And we’re going to make sure the government knows that people in Canada want and deserve better.

The current text of the USMCA essentially concedes everything that Canada won in its final negotiations of the Comprehensive and Progressive Agreement for Trans-Pacific Partnership (CPTPP). Canada's Copyright Act is currently under review in a national consultation — but the new USMCA IP chapter locks the country into our existing regime, leaving us with the failed US notice-and-takedown system as our only alternative. This directly undercuts the government’s claims of openness and transparency it has ascribed to this consultation, working to hear from stakeholders throughout the country. Instead, the voices of American lobbyists are being put first, and Canadians are being left out in the cold.

Over the past month, over 22,000 people have emailed Minister of Foreign Affairs, Chrystia Freeland, asking for her to protect our digital rights and exclude the Intellectual Property from this bad deal, at act.openmedia.org/DontTradeAwayTheInternet

People in Canada can submit their views to the current Copyright Act review consultation at: https://letstalkcopyright.ca/