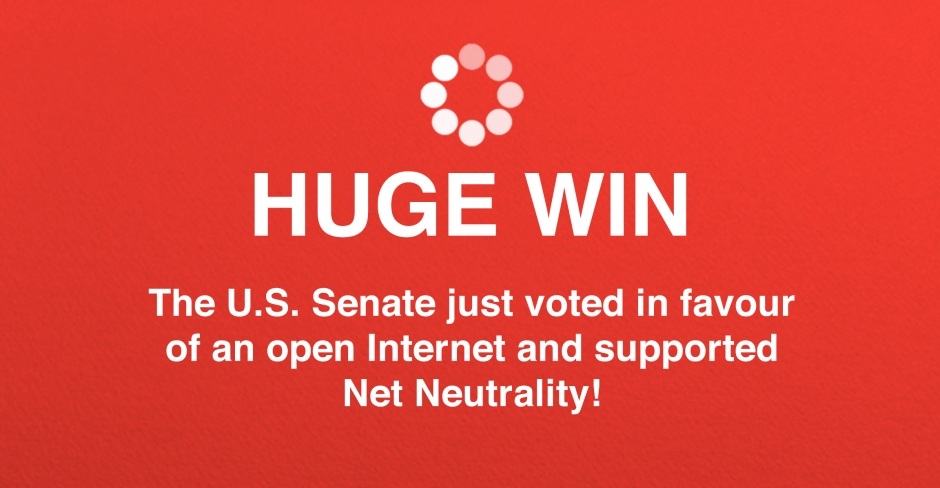 Next step is for the House of Representatives to vote to reject the Federal Communications Commission’s assault on the open Internet — so we must keep up the pressure!

This afternoon the United States Senate voted 52-47 to overrule the Federal Communications Commission (FCC) and reinstate the Open Internet Order, a monumental piece of legislation that has secured an open Internet.

The vote brings the U.S. one step closer to stopping efforts by the FCC’s new chairman and former Verizon lawyer Ajit Pai to repeal Net Neutrality protections, without which we could see a two-tiered Internet, where those who can’t pay are forced into an Internet slow lane.

Today’s vote is a huge win in the fight for an open Internet. These protections are critical to Net Neutrality — the principle which has been at the heart of the Internet for the last two decades, and ensures all content is treated equally. It lets the best applications and content thrive, not just the ones that pay off Internet Service Providers.

Internet policy in the U.S. has long influenced policy in the rest of the world. Today’s vote is a step in the right direction, but unless this assault on an open Internet is also stopped by the U.S. House of Representatives, Net Neutrality will be lost, and the impacts will be felt far beyond the U.S. border. It will impact Canadians who use services that are based in the U.S., it could affect our legislation here at home, and it will definitely have a negative impact on global innovation.

Canada has some of the strongest Net Neutrality protections in the world, but if the U.S. rules are not restored, it could set an incredibly dangerous precedent for governments worldwide. When these Title II protections were enacted in the U.S. in 2015, it was a huge win, and helped set a positive standard that countries around the world worked towards.

If U.S. telecom companies start throttling, blocking or enacting paid prioritization, forcing Internet companies to pay them more to escape being slowed down, those increased costs to Internet companies will be passed down to customers — regardless of what side of the border they’re  on.

Big Telecom cannot be allowed to choose the winners and losers of the Internet, by forcing Internet companies to pay up. Without Net Neutrality, large giants who can afford to pay will only further entrench themselves as power players, forcing start ups and innovators to the fringes.

Today’s Congressional Review Act now moves to the House of Representatives to be voted on.

Concerned individuals and companies are encouraged to speak out on social media, and to contact U.S. lawmakers at BattleForTheNet.com.

Our submission to the Broadcasting and Telecommunications Act review is in — thanks for speaking out! January 15 2019