A mobile billboard campaign circling Parliament is demanding to know why the federal government has not supported the affordability and availability of Internet in Canada during the pandemic.

September 10, 2020 — Ottawa — A mobile billboard campaign circling Parliament is demanding to know why the federal government has not supported the affordability and availability of Internet in Canada during the pandemic.

After COVID-19 hit Canada in March, the federal government took rapid action to address the direct health and economic impacts of the ensuing shutdown. Yet despite public health officials recommending or mandating that work, school, and other basic services be accessed over the Internet for much of the last six months, the government has not made that possible for the low-income, rural or Indigenous communities, for whom functioning through the Internet can be near impossible.

“These billboards represent the frustration that citizens across the country feel after having been betrayed and abandoned by our own government. It’s simply unacceptable for a government to make much-needed promises of affordability and connectivity, and then abandon their constituents when they need it most. We’ve heard these promises for months, but ultimately it seems that’s all they were – empty promises. When it comes to meaningful action, the government has categorically failed, and needs to be held accountable,” said OpenMedia Executive Director Laura Tribe. “Last month, the government’s decision to side with Big Telecom and undermine the CRTC’s fair rates for wholesale Internet access sent a strong message: protecting shareholder profits is more important than delivering on the government’s own promises of a more affordable Internet. It’s a poorly calculated political maneuver that leaves hundreds of thousands of Canadians in the lurch – at a time that people need the Internet the most.”

Tribe continued, “This is the worst possible time to be deepening Canada’s digital divide. One in 10 Canadian households do not have access to high speed home Internet – either because they can’t afford it, or because it isn’t offered in their communities. Countless students are being forced to attend in-person schooling, because they don’t have the option for online learning. Over 8.5 million people have applied for Canada Emergency Response Benefit, as unemployment levels have skyrocketed across the country. So why haven’t Minister Bains or Minister Monsef done a single thing to make it easier for Canadians to use the Internet during the pandemic, and protect their health, livelihoods, and education? It’s the backbone keeping the country connected, but the government is actively leaving millions behind.”

OpenMedia’s campaign is seeing mobile protest billboards circling Parliament, the CRTC, and the Toronto International Film Festival, demanding answers from both Minister Bains and Minister Maryam Monsef for the inaction of their Ministries.

Minister Monsef announced at the beginning of the pandemic that the government would be accelerating release of its Universal Broadband Fund, aimed at supporting infrastructure development in rural communities that lack access to the CRTC speed target of 50 Mbps down/10 Mbps up. Since a brief conference statement more than three months ago that the fund would be opening ‘soon’, there have been no further updates from the government on making UBF funding available.

Since August, over 35,000 people have written to Minister Bains asking him to explain why the government has interfered with the CRTC’s process to raise Internet rates at https://openmedia.org/betrayal. 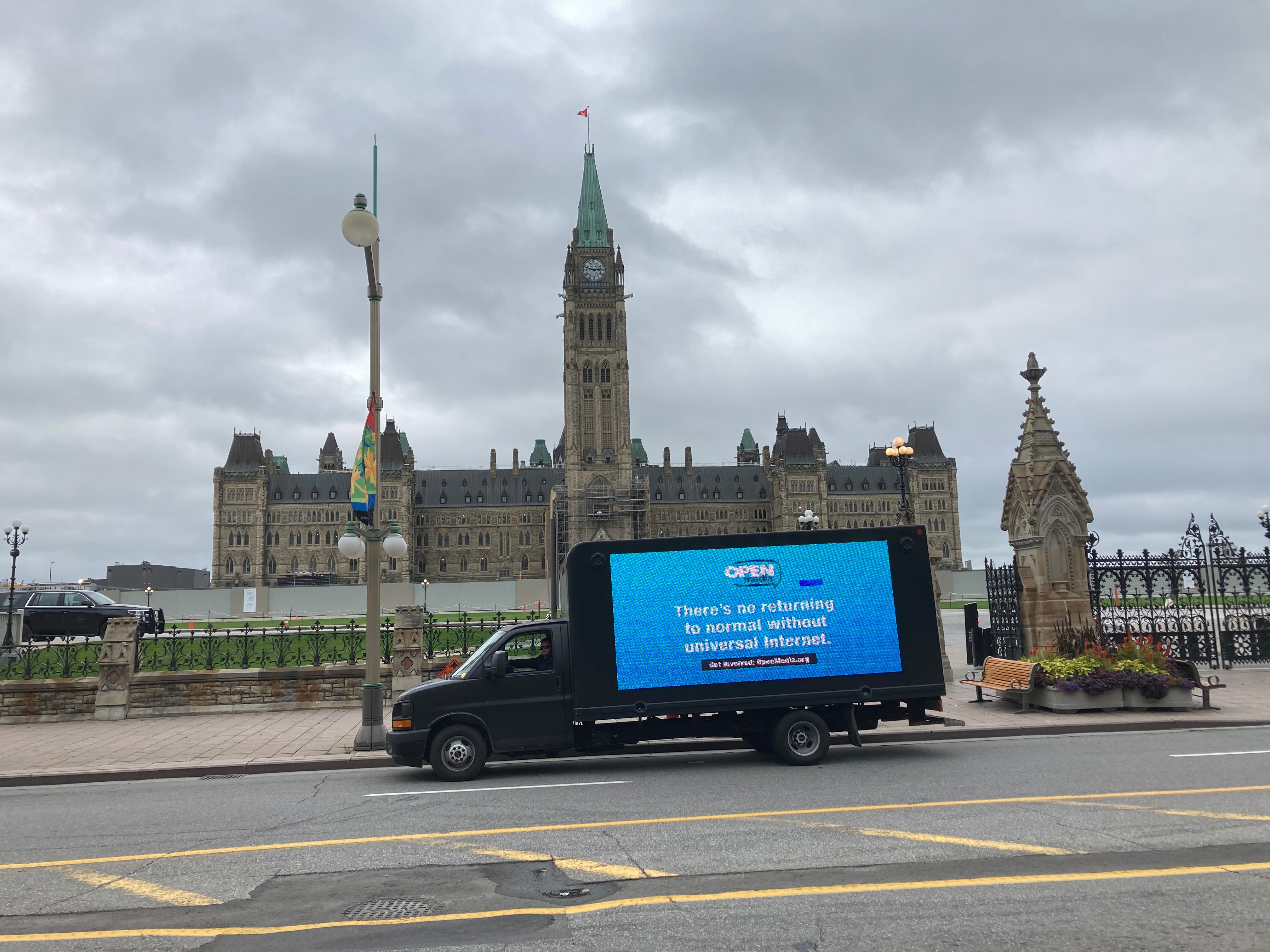