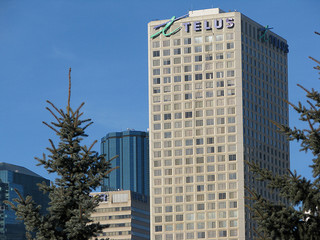 You told us, we told them: A report-back from our meeting with Telus

When several senior representatives from Telus asked us to meet with them we knew immediately what we wanted the meeting to include: direct citizen stories about disrespectful and expensive cell phone service in Canada. This was clearly a unique opportunity to bring Canadian voices directly to executives running one of the big three cell phone giants. We shared a story from John, who was unexpectedly hit with a $300 bill from Telus after asking for a voice-only plan and unknowingly using expensive, metered data services. John quite effectively articulated the limited options facing customers: “What do I do to not pay this outrageous fee? Spend more hours on the phone? Spend thousands on legal fees to fight $300? Refuse to pay it, and have my credit rating dinged?” Reps from Telus discussed the various steps that they have taken to address these kinds of complaints. We highlighted some of the themes we’ve been hearing from you via Cell Phone Horror Stories, and on our Facebook wall: disrespectful customer service with unreasonable hold times; long contract lengths with expensive termination fees; false charges on your bills and a refusal to remove them; and high roaming fees in a context where cell phone service is already very expensive.

Beyond asking them to respond to Canadian cell phone horror stories we also had a wide ranging discussion where we pushed the Telus reps to make firm commitments to support digital policy that would enable more open and affordable options in Canada. Here’s what we discussed:

Telus was responsible for originally suggesting that a proceeding should happen to determine national-level rules for a cell phone code of conduct. At this point, they are quite sure that the national rules will go further than any of the current provincials codes do - 85% of the rules applied in Quebec are now being proposed at the national level. Telus is contesting some things proposed in the current proceeding, like rules requiring paper billing. We asked:

Q: Will Telus support monetary penalties for enforcement of the upcoming CRTC cell phone code of conduct and other digital policies made in the public interest (also called Administrative Monetary Penalties or AMPs)?

A: They support AMPs in principle but it depends what the mechanics would be for this exactly. Such fines could be used for anti-competitive behaviour, Net Neutrality violations, and price-gouging as well. OpenMedia.ca has been calling for AMPs for some time (see our Action Plan for a Connected Canada). Right now there is little to compel Big Telecom to play fair and respect the open Internet – AMPs would give good rules some teeth.

Q: Will Telus support a rule in the wireless code of conduct stipulating that there should be no contract renewals or changes to contract terms without consent?

A: They support rules for no contract renewals or changes without consent - they already do this (though customers are automatically put on month-to-month plans at the end of their contract)

Q: Will Telus support a rule in the wireless code of conduct stipulating that there should be no early termination fees on top of contracts?

A: They wouldn’t support rules for no early termination fees at all (they want to ensure customers pay off their devices, and also pay some administrative fees).

Q: Will Telus support a rule in the wireless code of conduct stipulating that cell phone companies must allow customers to unlock their phones at any time without penalties or additional costs?

A: They would accept a rule for free phone unlocking at the end of contracts. They do not support a rule enabling free unlocking of phones at anytime. Currently, their policy is to allow customers to unlock their phones for $35 after 90 days. They say they need this to protect their investment. We noted that we need to empower Canadians to have free choice, and thus to remove barriers to switching to competitors. Locking phones is a barrier, so clearly it should be removed if more choice is our policy goal.

Q: Will Telus support a rule in the wireless code of conduct that protects Canadians from bill shock (maybe notification of additional fees)?

A: They would support a commitment to protect customers from bill shock, with rules around notifications of additional fees. They already do this for data caps and for roaming.

Q: Will Telus support a rule in the wireless code of conduct stipulating that cell phone companies must provide all-in pricing (to assist with informed consumer comparisons)?

A: They would support all-in pricing. They said as long as everyone is playing by the same pricing information rules they are supportive.

Q: Will Telus support a rule in the wireless code of conduct stipulating some kind of more robust customer recourse for failure of action?

A: They’re not sure what other kinds of recourse customers should have if they feel they have been wrongly treated - more people should know about the Commissioner for Complaints for Telecommunications Services (CCTS). Currently, Telus is required to put a notice on their bills and on the website about it.

Q: Will Telus support a rule in the wireless code of conduct that would help Canadians avoid long term (i.e. 3-year) contracts?

A: Currently, the big Internet Service Providers control the Internet infrastructure – that means they sell Internet service to you and me in our homes, and they also sell it to small independent Internet service providers who compete with them. That gives the big providers an incentive and various means to make it difficult for small providers to compete for our business on a level playing field. Telus seemed to understand the disincentive this provides in the marketplace – they have even agreed not to compete with small providers in parts of British Columbia where the Internet market is just starting to grow. They seemed to understand the dysfunction this creates in the marketplace, but still would not support functional separation, suggesting it was an extreme solution that creates a disincentive for big ISPs to invest in next generation networks. We pointed out the success the UK has had with this, as we did in our major report Casting an Open Net.

Q: At the moment only a few big telecom conglomerates provide access to fast fiber Internet connections. This means there is very limited ISP choice for what will be the standard for Internet service in the near future. Does Telus support independent ISPs to be permitted to compete with the incumbents on fiber Internet services?

A: Telus’ position is that the fiber belongs to those who built it – though they understand the need for competition, they are against mandating access for independent ISPs.

A: Telus would support moving to a more citizen-centric public interest approach by the CRTC, including fewer closed-door stakeholder meetings and a balance of public interest and industry interest representation.

Q: What is Telus’ position on Bill C-30, the warrantless online surveillance bill?

A: They don’t want to be responsible for paying for the new surveillance infrastructure. They also don’t want to be on the wrong side of the law, but agree that warrantless access to the private data of law-abiding Canadians is against the wishes of Canadians. They would be interested in seeing the new coalition statement of our StopSpying.ca coalition, and might consider supporting it.

Q: Digital economy strategy – does Telus support investing the proceeds from the spectrum auction in things like more broadband connectivity?

A: They think there will be a proceeding eventually for Bell not charging data fees, and thus unfairly prioritizing its own mobile content. But they wouldn’t support stronger non-discrimination rules for mobile content/data. They often don’t support rules because they don’t know what the future will hold – at some point, they might want to be able to prioritize their own content offerings.

We reiterated many times that it’s our job at OpenMedia.ca to fight for the possiblities of the open Internet. We think that should be the job of digital policy-makers too. Having independent and affordable options for accessing the Internet is crucial to keeping the Internet open, and empowering the creativity and participation the Internet makes possible. So digital policy-makers should be working overtime to enable independent options and Internet openness, even when it conflicts with the best interests of Telus.

We’re very glad that, with your help, we now have the influence that brings these kinds of opportunities to share your stories and amplify your voices with those in power. We’ll keep bringing the pro-Internet community together to make it a powerful force decision-makers can’t ignore.