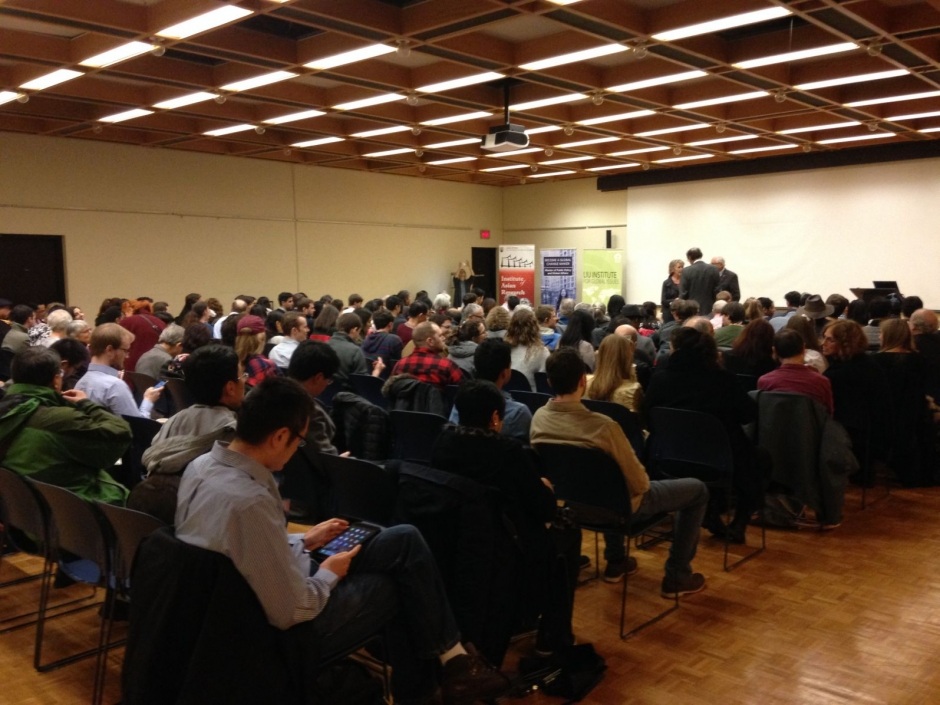 Who benefits from the TPP? We’re still not sure. An evening with Chrystia Freeland, Canada’s Minister of International Trade

I attended a panel discussion on the Trans-Pacific Partnership (TPP) with Canada’s International Trade Minister, Chrystia Freeland, in the hope of finding some answers to the big question: who benefits from the TPP?

Last night I attended a panel discussion on the Trans-Pacific Partnership (TPP), as a part of the new government’s promised public consultations on the far-reaching agreement that will affect everything from Internet governance to environmental regulations in its 12 participating nations.

The event was entitled “Who benefits? Canada and the Trans-Pacific Partnership.” The headliner? Canada’s newly-minted International Trade Minister Chrystia Freeland.

For an event that was organized on short notice – anecdotally, I was told by another panel participant that she was invited within the last week – the room was packed with people, waiting, presumably, to hear the minister address the elephant in the room: who benefits from the TPP?

Working on trade policy, I can’t count how many times this axiom has been trotted out in the media, in meetings, in conversation: not everyone can be a winner in trade negotiations. Or, as my father once succinctly packaged the point, “that’s why they call it trade.”

And right he was. Canadians, and citizens from Australia, to Mexico, to Japan, are now faced with a decision: is what we’re giving up worth what we’re getting? That’s the crux of trade right there. What are we giving up, and what are we getting? Is it a fair trade?

The answers you seek are still not here

So there I sat in a room full of students, professors, activists and trade experts anxiously awaiting any morsels of information we would be allowed about an agreement that was negotiated entirely in secret, and agreement which was made public only weeks ago, and which Freeland herself readily admits is “really, really complex.”

"A lot of groups are only starting to understand now what the #TPP means for them." @cafreeland

So what did I learn about the TPP last night? I’ll mostly skip over the panel discussion, as you’re likely here for the same reason I went last night: you want the straight goods. (Plus, if you’re really keen to find out more about Minister Freeland’s thoughts on trade in a post-Bretton Woods era, you can probably read about it in one of her books.)

Importantly, I did learn some things.

The first is that the new government is eager to draw a clear distinction between its governing style and that of the Harper government. Freeland’s opening comments were all to this effect, as she highlighted that openness and transparency would be coming in spades with the new Trudeau government. (Déjà vu anyone?)

But her statements continue to build a narrative that the Trudeau government has been advancing since well before the  2015 election. Take Trudeau’s comments on the TPP in August of last year:

The fact is, however, that Mr. Harper has continued to conduct himself with the secrecy and opacity, to which Canadians have become accustomed, and we don’t know what’s on the table, what sort of deals, what sort of sacrifices have been made.

At the very least, this acknowledgement of the problems with the process, and the post-election renewed commitment to hold a ‘full, open debate’ about the merits and drawbacks of the TPP are encouraging. As we transition from a government that withheld information on the agreement for years, and used scare tactics to try to convince Canadians what a ‘terrible error’ it would be to be reject it, this is a welcome change.

Minister Freeland also made much of how the TPP would be subject to a robust scrutiny and public debate. She committed to putting it as the first item on the agenda of the Trade Committee when Parliament resumes, and said that she hopes for ‘cross-country consultations’ on the issue. She recognized that the ‘healthy debate’ in Canada, and spoke of her team’s dedication to answering all the questions that Canadians would put to them in assessing the purported benefits.

Finally, I learned that after the signing opportunity that is soon to come – her words, not mine – that all partner nations in the TPP countries will havetwo years for domestic debate on the agreement before it must be ratified.

The questions I have for Minister Freeland

After the brief panel discussion, the event moved into what can only be described as the least satisfying question-and-answer period of all time. Just six questions were taken from audience members, while Minister Freeland listened intently and nodded along, jotting down key phrases in her notepad.

My question for the minister was as follows:

Over the past three years of campaigning on the TPP, OpenMedia has seen an incredible amount of concern expressed by Canadians – in particular about the copyright and IP provisions contained within the TPP. While we recognize that the government has concerns about the potential penalties to not signing the TPP, what level of public outcry would you need to see to consider not ratifying the agreement?

Unfortunately, when the time came to answer the questions, not one of them was given an attempted reply. This Vancouver event was described by organizers as “part of a national consultation tour,” in which, presumably, consultation is to happen. In actuality, this event, while an encouraging step, vastly missed the mark in terms of genuine citizen stakeholder engagement.

It’s important to remember, and to remind our government, that we have been promised real consultation. Right now they’re inviting feedback through an email address where Canadians can send both technical concerns and more general comments. (More to come on how we’ll be helping Canadians to make the most of this opportunity.)

But in the meantime, here are some additional questions I have for Minister Freeland about the TPP, that I am hoping to have answered:

What are your questions about the TPP? Comment below, and we’ll start a master list. And stay tuned for more information about how OpenMedia will be helping to amplify your voices in this consultation. Spoiler alert: there will be tools, there will be emails, and hopefully there will also be answers.