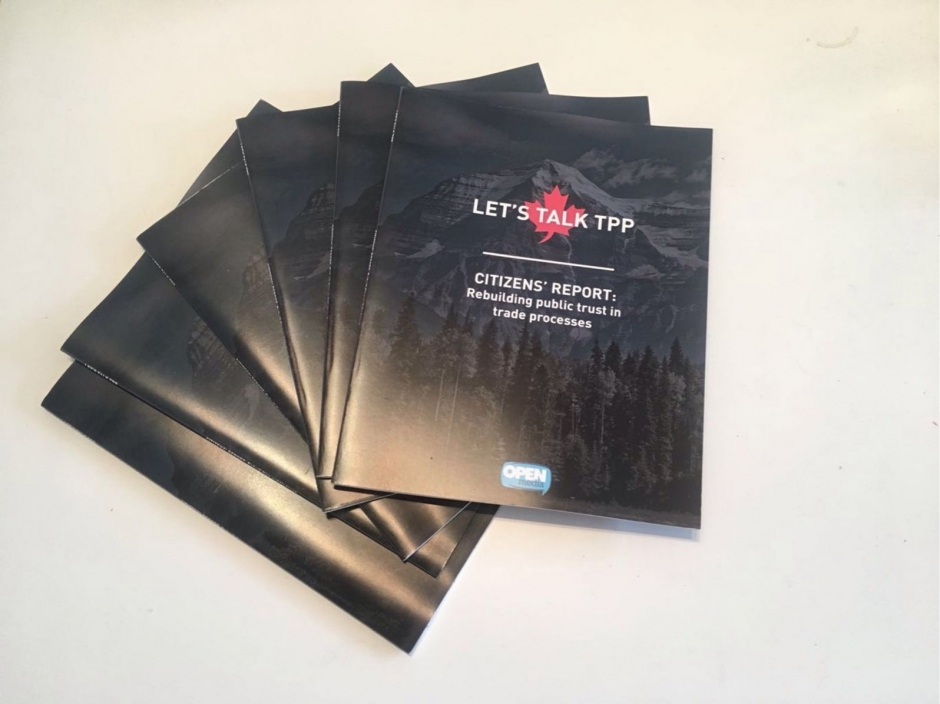 It’s here! Our TPP Citizens’ Report explores how we can rebuild public trust in trade processes

Our Let’s Talk TPP Citizens’ Report is finally here! Check out the full report and use our tool to send it to your MP.

Today, as Trade Ministers from Trans-Pacific Partnership nations are meeting in Chile, OpenMedia has launched our Let’s Talk TPP Citizens’ Report— shaped by the input of almost 28,000 Canadians who shared their thoughts and concerns with the House of Commons Standing Committee on International Trade (CIIT), tasked with studying the agreement.

The CIIT is expected to produce its own report on the consultation which formally closed on January 31.

In the report we highlight the concerns of Canadians in five key areas: digital rights and innovation, corporate overreach and democratic accountability, healthcare and public services, the environment, and labour and the economy.

As the report’s author, I was inspired to read so many passionate, detailed contributions from people explaining why they oppose the TPP and what Canada needs to do better next time.

People like Darlene from Saskatoon who warns the TPP “allows corporations to willfully bully Canadians and our government,” or Tom from Nepean who warned “the trust of Canadians cannot be taken for granted”.

Those of you who follow OpenMedia’s work will know that we focus on issues of digital policy — working to keep your Internet open, affordable, and surveillance-free. But after four years of raising questions and concerns about the impacts the TPP would have on our online freedoms, in 2015 we moved to collaborate with other groups who don’t explicitly share our mandate, but have been working to engage with Canadians on the TPP. We made this leap precisely because of the lack of attention that was being paid to the TPP’s far-reaching impacts on almost every facet of our daily life, and the deficit in cross-sector analysis.

What we found from reviewing comments made by Let’s Talk TPP participants was, far from being siloed into issue-specific buckets, Canadians were broadly concerned about the impacts of the TPP on democratic decision-making as a whole, and how we as a nation decide on policies that affect us all. We also heard that Canadians had many specific concerns about the provisions that would have been enacted under the TPP.

But perhaps the most important takeaway is that Canadians have lost trust in the process — in no small part because the TPP’s negotiation was conducted in extreme secrecy. Transparency is an essential accountability mechanism in any democratic society, and without it citizens have become deeply skeptical that the results of trade processes will be to the benefit of the majority of Canadians. And these concerns are borne out in the TPP — a flawed process yielded a flawed result, which we are now calling on our government to formally reject.

This report would not have been possible without the generous support of Unifor, NordVPN, CWA Canada, Private Internet Access, the Canadian Union of Postal Workers, and the United Steelworkers. We also had a team of expert peer reviewers, and a body of analysis and research upon which we relied to support and fortify our arguments. So a big thank you to those who helped bring this project into the world.

We’ve identified our central challenge: rebuilding public trust in trade processes. We hope this report will help illuminate the way to better practices, ones that encourage Canadians to take a seat at the table and be genuinely engaged before, during, and after agreements are drafted as we aim for fairer trade.