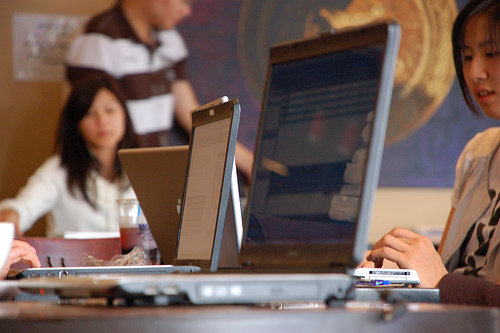 The Internet you know is about to look a whole lot different. And you might not like what you see.

Imagine a world in which your favorite indie comedy troupe can no longer afford the bandwidth to stream the sketches you love onto your desktop. Or a world in which the small e-shopping website you love shuts down as a result of an outrageous jump in bandwidth costs. Now, while you’re at it, imagine your shock when you discover your Internet bill has skyrocketed because your ISP is now charging extra to ensure your Netflix stream doesn’t come a grinding halt, or that you’re able to connect with friends on Facebook. Unfortunately, this is what a world without net neutrality rules could look like – rules that hang in the balance for our neighbours to the south.

Back in January, three judges on the U.S. Court of Appeals made a game-changing legal decision in the case of Verizon v. FCC. Their decision allows giant telecom conglomerates to block or slow down any content they want on their networks.

Previously, all telecom providers were bound by so-called “net neutrality” rules that prohibited them from censoring any content online. Without these rules, it’s impossible to ensure that the content you want online is treated equally – a key principle of the open Internet.

In response, the U.S. FCC – which is the American equivalent of the CRTC – has announced they will not appeal the Verizon v. FCC decision. Instead, it will review net neutrality violations on a case-by-case basis– whatever that means.

The problem here is a straightforward one: the FCC thinks their job is to coddle industry, rather than act in the interests of everyday citizens. Sadly, this shouldn’t come as a total surprise, given the FCC’s history of hiring ex-Telecom lobbyists into leadership positions, and sending their former employees on to high profile gigs as telecom and industry shills.

If you think this kind of industry coddling can’t happen in Canada – guess again. Your OpenMedia team recently came across a very troubling interactive questionnaire from the CRTC soliciting citizens’ views about government rules that have the potential to either help fix our dysfunctional telecom market, or give big conglomerates even more power to raise prices and control services – that is, on top of the 90% market share they already dominate.

Since its launch, we’ve heard everyday Canadians, as well as experts like Michael Geist and Peter Nowak say that they find it “lopsided”, and even misleading. As one online commenter put it, “it seems like they ‘consulted’ with the industry first before ‘consulting’ with customers.”

While I encourage you to read the full story here, the survey shows a CRTC bent on imposing industry-approved rules for customers, and, most disturbingly, a CRTC willing to throw out net neutrality rules in a lazy and misleading attempt to improve digital services in the country.

But the long-term impact of coddling Big Telecom promises to go further than affecting your pocketbook and access. To consider this, let’s take a step back and ask ourselves a basic question:

“How does the removal of net neutrality rules affect the balance of power between everyday people and telecom giants?”

Some of the answers might be simpler than you’d expect. Let’s consider a few:

The higher costs and limited speed will all but guarantee that fewer individuals can have their voice heard in an open forum. The range of issues and diversity of voices will be dramatically narrowed. Your favorite indie media producers will have their reach stifled, and the big producers will be the only game in town. Genuine and authentic choice online will slowly die. Small businesses, innovative services, and alternative providers will all become collateral damage in Big Telecom’s war on the open Internet. And these are just a few examples.

Worse, we may already be seeing it happen in the U.S. Consider a recent deal between Netflix and Comcast. After many months of subscribers complaining about Netflix’s performance across Comcast pipes, the two companies have decided that, for an additional fee, the video streaming service will get better access to Comcast subscribers. Yet the crux of the problem is that Comcast is in a position to use its outsized market power to restrict access to online services that compete against its own, especially its own out-dated content/TV services.

In sum, the rules we choose to govern the Internet will have a major impact on the type of society we aspire to. From its inception through to the present day, the Internet has always promised to level the playing field – to improve access to knowledge, provide new economic opportunities for a burgeoning class of innovators and everyday citizens, and counter the media monopolies of the 20th century, ushering in an era of genuine and authentic choice.

But these promises were never guarantees. This is why the fight for net neutrality is, essentially, a fight for Internet freedom, and the fight for an open society that allows each of us to reach our fullest potential.

And we think those are promises worth fighting for.