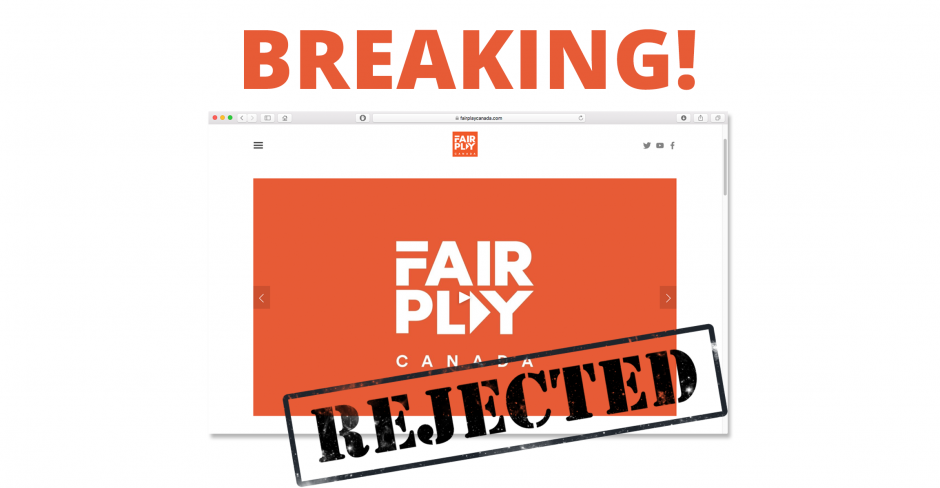 Today the CRTC released its decision to reject a request from a coalition of organizations – spearheaded by Bell Canada – to implement a website-blocking system to curb piracy. The CRTC has ruled that it does not have the jurisdiction to govern this area of the Internet, and encouraged these disputes to be settled through the ongoing reviews of the Copyright Act, and the Broadcast and Telecommunications Act.

The Bell-led coalition supporting the proposal called itself “FairPlay Canada”, and was asking the CRTC to create an official Internet agency responsible for maintaining a list of websites that ISPs would be required to block access to, without court oversight. The proposal was widely slammed by civil society groups, ISPs, tech companies, academics, lawyers and experts, who deemed this to be overreaching and unnecessary.

This is a big win for the open Internet, and a true demonstration of democracy in action. Bell’s FairPlay proposal would have seen innocent content knocked off the Internet, without any court oversight or due process. Today the CRTC protected the open Internet, in an important victory. But we still have a long way to go in protecting our digital rights after the concessions Canada made in the renegotiated NAFTA earlier this week. All eyes will now turn to the Copyright Act Review, to see the final act of this play.

In addition to this procedural request to the CRTC, Bell has also proposed its over-reaching ideas on how to fight piracy in the NAFTA negotiations, at the Copyright Act Review. While the proposal does not appear to have made its way into NAFTA, the Copyright Act Review remains underway, and questions remain as to how the government will handle these requests.

The campaign against website blocking, led by OpenMedia, Sum of Us, and LeadNow, included a national Day of Action on February 28, which saw over 50,000 submissions into the CRTC’s consultation page, tens of thousands of tweets sent to FairPlay coalition members, and significant media coverage.

Over 70,000 people took action at dontcensor.ca, contributing to the over 150,600 interventions the CRTC received in this proceeding.