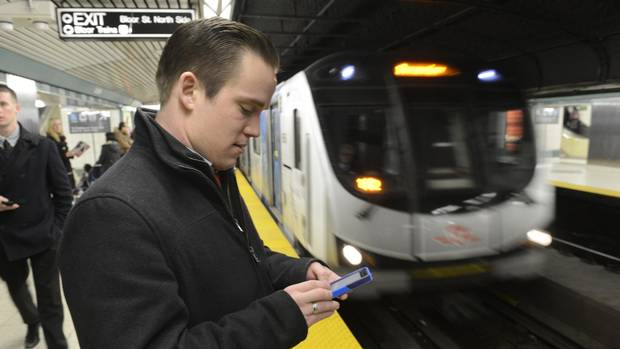 Great news for subway commuters users in Toronto, and yet another reason to escape the high prices and rampant abuse of the Big Three as new options become viable for Canadians. We hope that other providers will follow Wind's lead, and that the CRTC and Industry Canada will take bold steps to improve mobile choice and affordability in Canada. Article by Christine Dobby for The Globe and Mail

Wind Mobile Corp. has struck an exclusive deal to bring cellular service to its customers who use Toronto’s underground subway.

The wireless carrier ‎announced the move during a press conference with the city’s mayor, John Tory, at a downtown Toronto subway station Wednesday morning.

‎The company is working with BAI Canada, which holds a contract from the Toronto Transit Commission (TTC) to implement cellphone and WiFi coverage in the subway system.

Yet, to date, BAI has only deployed WiFi service at a number of downtown subway stations, leaving many transit riders frustrated that they cannot use cellular service to make calls and send text messages during their commutes.

Wind said it has set up infrastructure to deploy cellphone service on the platforms of 18 stations in the downtown lower loop of the Toronto subway system.

Mr. Tory said Wind has signed on to be the first cellular carrier to offer its customers cell service on underground parts of the subway.

The mayor said any carrier can sign on to offer its customers service and TTC Chair Josh Colle said he hopes the move will put pressure on others to sign on.

Wind serves only a small number of customers compared to the dominant carriers, Rogers Communications Inc., Telus Corp. and BCE Inc. (BCE owns 15 per cent of The Globe and Mail.) In December, the company had 800,00 customers in Ontario, B.C. and Alberta, while the Big Three together serve more than 25 million wireless subscribers nationwide.