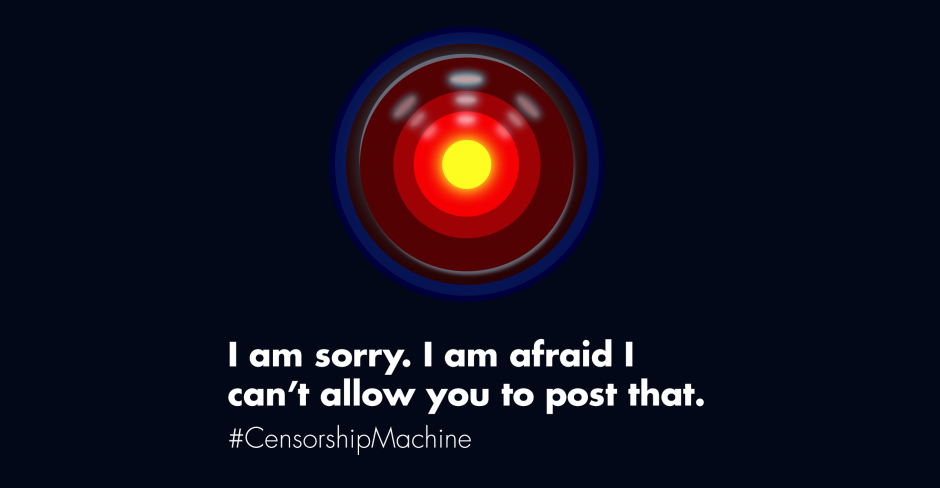 Germany has published their position on Article 13 — the EU proposal for censorship machines, completely disregarding evidence about content filters and public opposition to this proposal.

Germany just published their position on Article 13— the EU proposal for censorship machines, and it’s unacceptable. It tells us that they either a) haven’t learnt anything yet from the depth of evidence from experts about content filters or b) they are in the pockets of Big Media companies.

Protections from liability are one of the fundamental building blocks of the web, but Germany is suggesting that it is time to pull the foundations out — and replace it with automated censorship.

It works like this: Everything you do on the Internet is done through “intermediaries” — for example Internet service providers (ISPs), social networks, and search engines.

If these intermediaries are liable for what users post, it’s a huge incentive to restrict what can be posted. They censor the web, to be safe. So instead, ‘users’ are responsible for what they do and post online. In the past we’ve explained that in order to be eligible for these protections, companies have to respond to notifications about illegal content and take it down.

We know all this because these filters already exist in many formats. YouTube’s ContentID, Facebook, Instagram. These major companies already use these mechanisms. But this proposal would legally force so many other businesses to do the same.

Then the Germany proposal gets to memes. They say that they might, very graciously, permit people to make and use memes, only if a lump sum could be paid back to ‘creators’.

The website where people post memes would have to pay a new levy to allow people to make them. It’s ridiculous because memes are organic, and you never know what actually is going to become one!

It also implies that Germany is taking the same lines we’ve seen from the media lobbying groups pretty much throughout their statement. It’s also not tackling the serious criticism from experts like David Kaye, UN rapporteur for free expression or Professor of Intermediary Liability, Daphne Keller or dozens of other experts who have repeatedly criticised the ideas.

There’s some small attempts at not making this truly destructive to free expression, by saying that Wikipedia should be exempt, and that small startups should be allowed to try out without being immediately “exposed” to the law. It is not clear how that could work in practice.

We need more people speaking out about this issue because it will have widespread effects on Internet users, so make sure to tell your representatives.

I will be delivering your voices to key MEPs ahead of the big vote on these proposals next month, so it’s key that we ramp up opposition to this terrible proposal and show decision makers we won’t accept it.