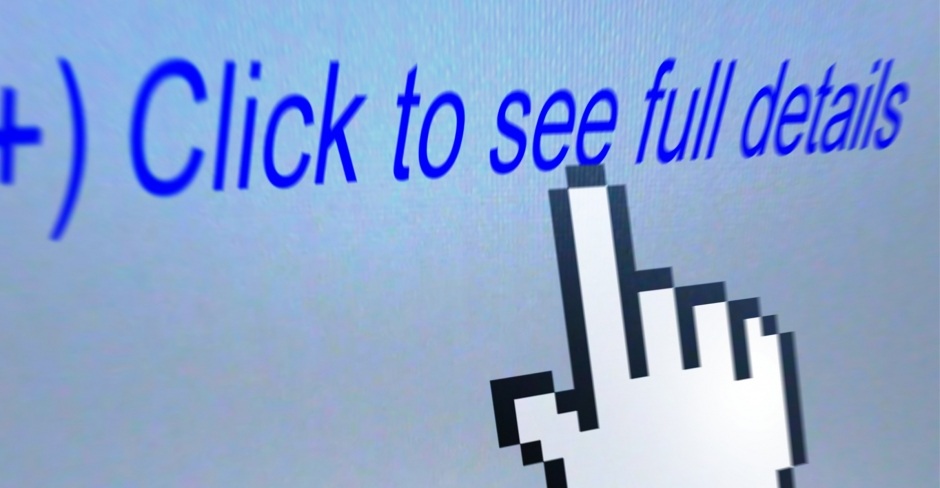 Data Caps and Overage Fees: What ISPs Aren’t Telling You

Telecom companies are keeping Canadians on a short leash when it comes to data caps.

For the first time at OpenMedia, we’ve thrown telecom companies’ offerings into the ring for all Canadians to see.

We’re pitting arbitrary data caps and overage fees against one another in our latest report. And just as expected, they are crumbling under scrutiny. We have just launched a new campaign to End Data Caps, and we need your help. Endorse our letter to the CRTC calling for an end to this price-gouging practice once and for all.

It was obvious when I stepped into the shoes of a potential customer — and found myself buried under a mountain of  “click to see more” links — that Big Telecom giants have been trying their hardest to keep customers in the dark about data caps.

These providers don’t want you to know that Canada is one of the only countries in the world to make wired Internet subscribers pay for the amount of data they plan to use. 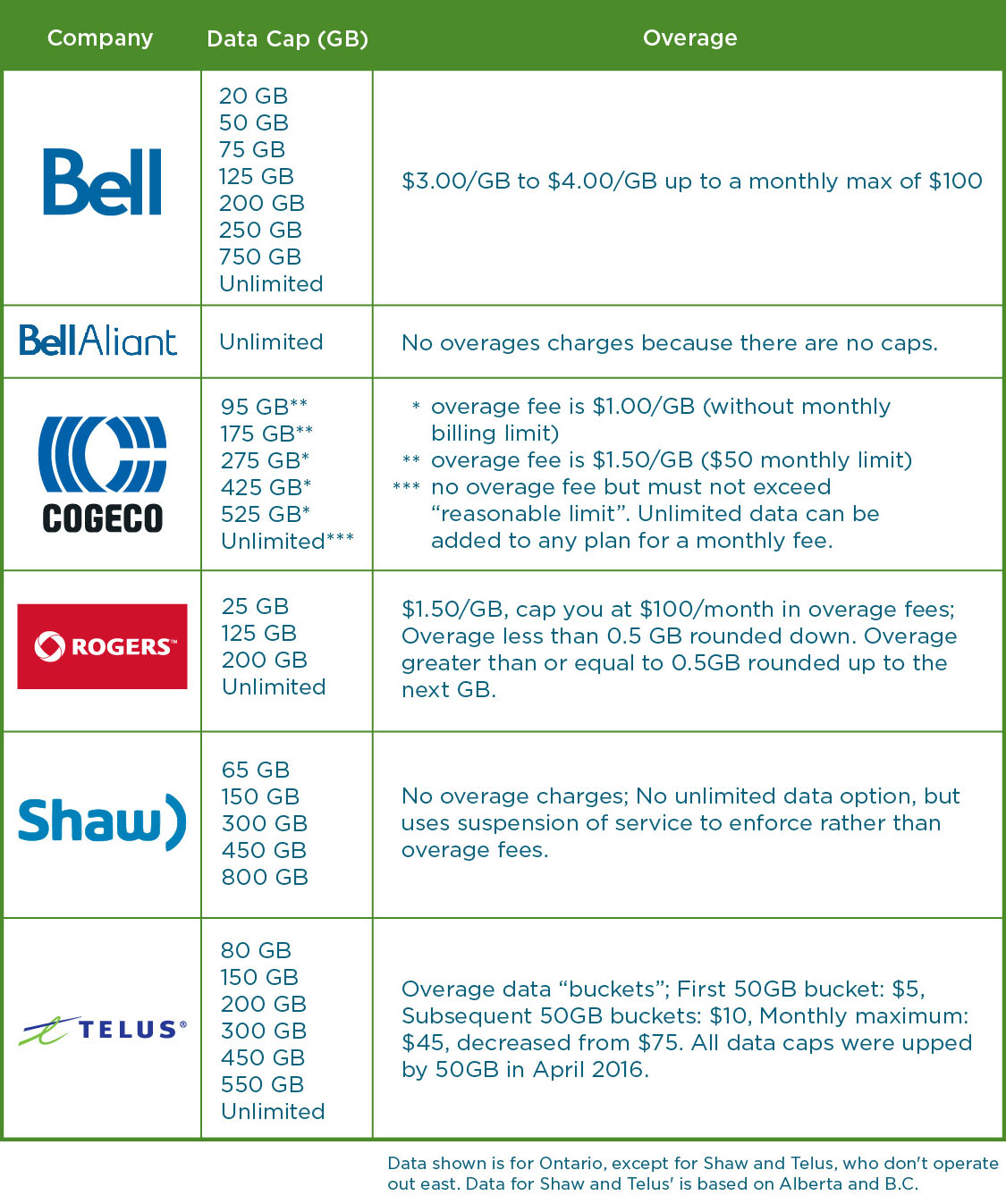 Data caps are common to all internet service providers in Canada except Bell Aliant.

Canadian ISP’s lists of data caps, overages, and pricing tiers seem to have been created to be as inconvenient to compare as possible. If the different data brackets across providers weren’t difficult enough to match up, I found these variations even showed up among the providers themselves. Deviations in wireless plans means there are drastically different services being offered in some regions of Canada from the same carriers. 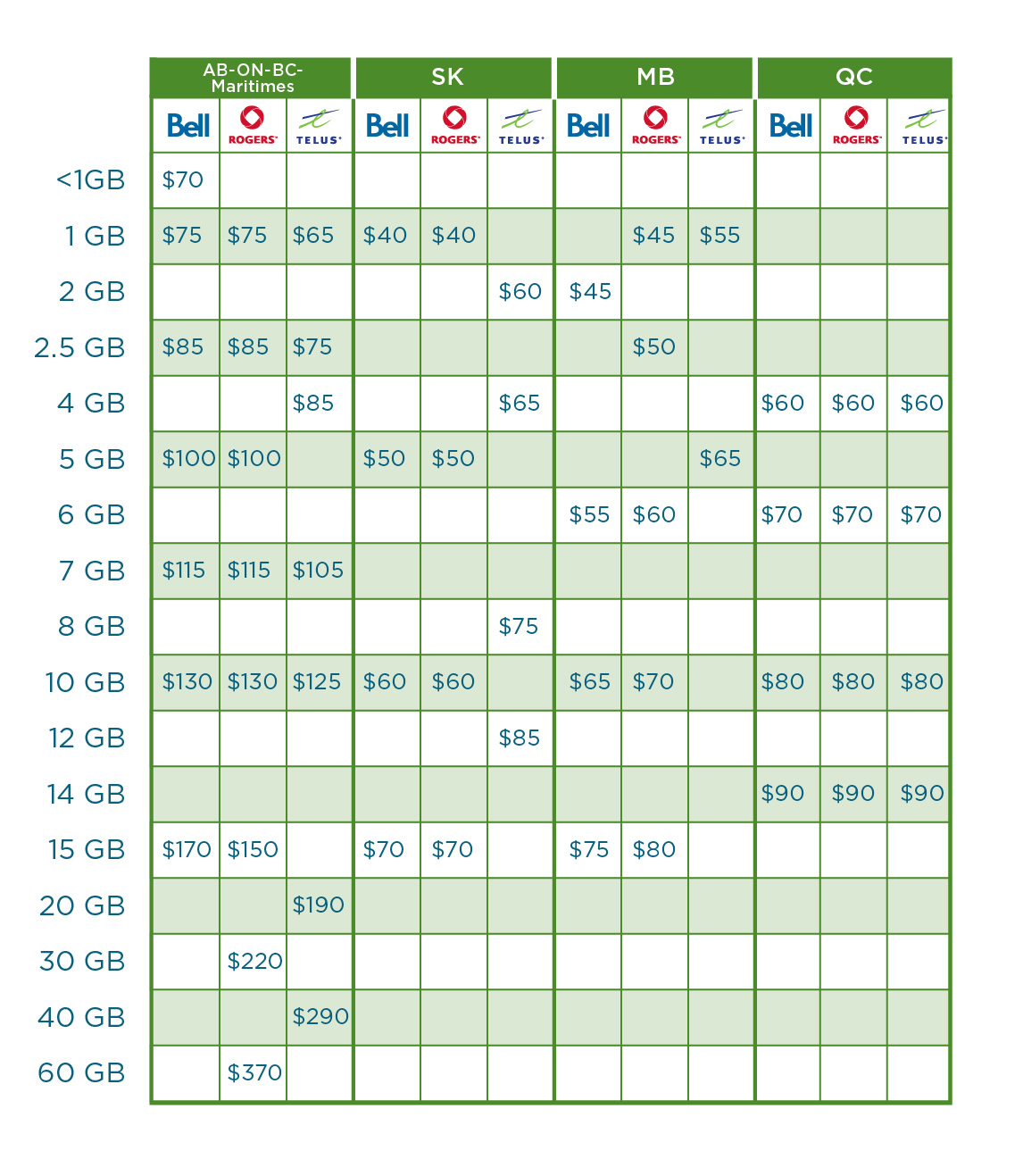 Wireless data plans vary widely in both selection and price throughout different regions in Canada.

A Bell customer in Ontario, for example, pays almost twice as much as a customer from Saskatchewan for the same 1GB plan. But seeing as how Bell doesn’t offer 1GB plans in Manitoba and Quebec, they’ve managed to make a simple nationwide comparison incredibly difficult for customers to attempt on their own.

Compiling that information in one place was just the first step in our efforts to make choosing a provider fairer for customers. I went in hoping there would be a button labelled “Click here to see all of our plans and corresponding data caps!” That button does not exist.

Instead I had to dodge flashy banners and promotional offers, and go spelunking in the depths of company websites to find what I was looking for. There’s no sense of urgency to show subscribers that they are offering the best deal.

Big Telecom is a fat housecat. They’ve gotten used to being fed Internet subscribers, and fighting to keep them has become a thing of the past. Websites that don’t showcase why customers should subscribe to their service are indicative of a market that does not feel the need to compete for its customer base.

Let these companies know that you refuse to be taken for granted. As Canadian customers, you should not be forced to pay a toll for using the Internet while your friends around the world enjoy unlimited data. Speak up now at act.openmedia.org/datacaps and don’t forget to spread the word by sharing our campaign on Facebook and Twitter!

Read our full report on the state of Canadian data caps: