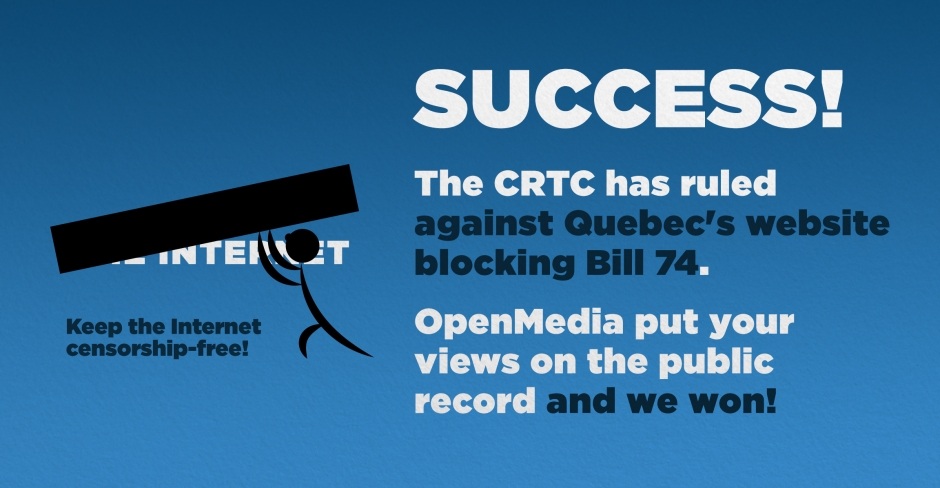 Good news, Canada! This morning, the Canadian Radio-television and Telecommunications Commission (CRTC)  ruled that the website blocking provisions of Québec’s Bill 74 violate Section 36 of the Telecommunications Act. The CRTC stated that this federal law prohibits Internet providers in Québec from blocking websites, regardless of whether provincial law compels it. Bill 74 requires Internet Service Providers (ISPs) in Québec to block access to online gambling websites that are not authorized on a list drawn up by government-backed Loto-Québec.

Critics argue that Bill 74’s website blocking amounts to Internet censorship and violates rules which keep our Internet free and open. The case was brought before the CRTC by the Public Interest Advocacy Centre (PIAC), who asked the Commission to declare the Bill 74 blocking provisions unconstitutional and illegal. OpenMedia intervened in support of PIAC, arguing that the website blocking provisions of Bill 74 harm freedom of expression and threaten the crucial role of Internet service providers in upholding it. Multiple telecom providers also intervened in support of PIAC’s application.

In the words of OpenMedia's External Counsel Cynthia Khoo:

"These days especially, protecting ISPs as neutral transmitters of information is essential to maintaining free expression and a healthy democracy. Forcing them to block websites as Bill 74 does could amount to government censorship, and would set a dangerous precedent for Canada’s digital future. This is a great ruling for the CRTC to start wrapping up the year with, and hopefully they'll continue in this pro-Internet spirit."

Bill 74 is also being challenged in the Québec Superior Court by the Canadian Wireless Telecommunications Association.