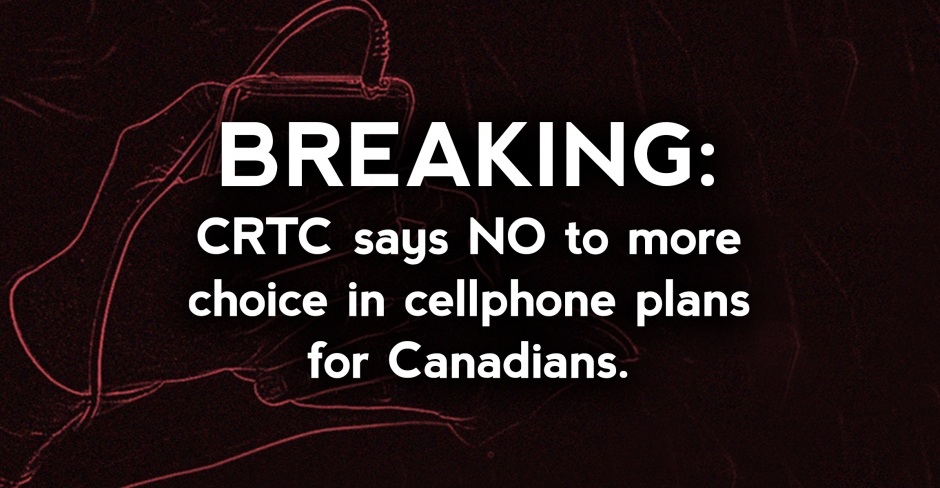 The decision comes after Innovation Minister Navdeep Bains ordered the CRTC in June to reexamine its previous decision from March 2017 that permitted Rogers to block customers of Sugar Mobile — an innovative Wi-Fi based MVNO that offered affordable service — from roaming on its network, effectively paralyzing the startup.

Today’s decision is incredibly frustrating for Canadians who have long been fed up with paying some of the highest mobile bills in the world. MVNO access would allow smaller providers to enter the market with more affordable options, which is the key to encouraging competition and providing relief from The Big Three. Instead, today we saw more of the same: A lack of action to address affordability through competition.

The CRTC promises more reviews in the coming year, but Canadians have been waiting long enough. It’s time for Minister Bains to set the record straight and mandate wholesale wireless access in Canada, with fair rates, to ensure we can finally see increased choice and give new competitors full access to the market. The time for change is now.

The CRTC also announced a consultation to examine the potential for low cost data-only plans from national wireless providers.

While on the surface this is good news, it fails to address the ultimate cause of Canada’s high cell phone bills: A lack of choice and competition. Until new wireless providers are allowed to enter the market, and Canadians are given more choice, we will continue to face extremely high, and rising, wireless bills.

When ordering the CRTC to reexamine its decision last June, Minister Bains said Canadians pay far more for similar plans than their counterparts in other nations — in fact, Canadians pay some of the highest prices in the industrialized world for wireless services. And today’s decision does not rectify this, but simply kicks the can further down the road.

A recent CRTC report revealed that one in three of Canada’s lowest income residents do not own a cellphone, compared with just five per cent of the highest income earners. OpenMedia has been calling on government to open the networks to more affordable providers for many years, including in its 2013 Time for an Upgrade report and in its crowdsourced policy platform for the 2015 federal election.

In December, Canadians saw what a little competition in our wireless market can do when Shaw’s Freedom Mobile offered 10GB/$50 a month packages — The Big Three rushed to matchthe smaller provider, offering 10GB for $60 a month. The limited-time packages were hugediscounts on the larger carriers normal offerings. And yet, still much more expensive than what citizens in most other countries pay.