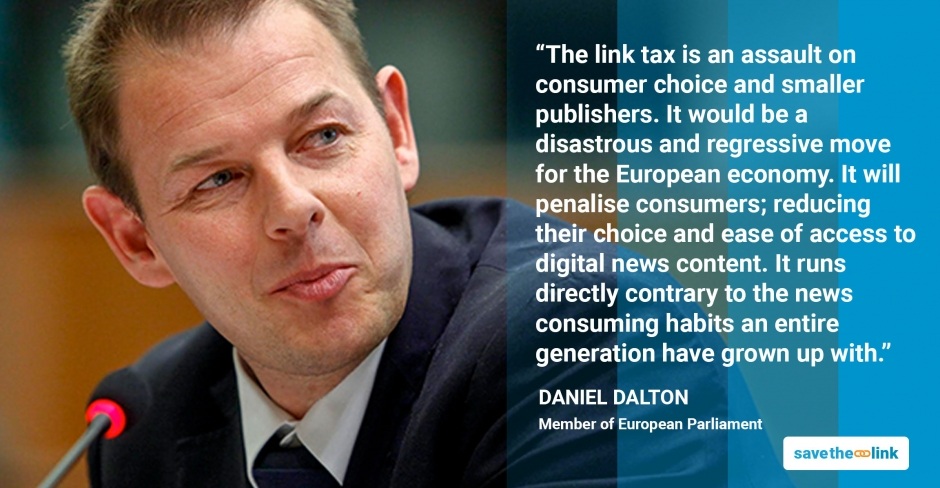 Breaking News: Leaked document reveals EU Commission’s plan to mislead and ignore you in their crusade for a link tax

The European Commission have shown themselves incapable of listening, recent leak shows they intend to push ahead with link tax and ignore public consultation process.

Today Statewatch released a leaked copy of the European Commission’s Impact Assessment on copyright reform: their statement of intent and justification for the proposed new copyright rules we’ve been anticipating the last two years.

Here’s the shocker: In this document the Commission clearly states that they will introduce an ancillary copyright for press publishers, giving them the ability to levy a fee on links with accompanying short snippets of text. aka, the link tax.

Yes, you heard me right. That’s the same link tax that European Parliamentarians firmly rejected, twice, in last year’s copyright report. The very same link tax that over 37,500 Internet users said “NO” to. It pains me to tell you that it’s this same idea that you and thousands of others asked the Commission not to implement just weeks ago – and yet, here we are.

And that’s not all: it’s now clear that the Commission is not just pursuing this bad idea, but are misleading Internet users in the process. Check out this tweet they sent us just two days ago promising not to introduce a link tax:

"The @EU_Commission does not have any plans to tax hyperlinks" @Ansip_EU#linktax#savethelink#copyrighthttps://t.co/y2JwdhqQoJ

It’s appalling to see the European Commission promise one thing in public, while planning the opposite in private. Not only does the Commission plan to ignore the over 37,500 individuals who submitted feedback on this issue via our Save the Link tool, along with dozens of public interest groups, publishers, and web companies, it’s now clear they want to mislead us in the process.

As ever, the Commission’s justification for this costly scheme is paper-thin: it's leaked assessment vaguely claims that, “news aggregators, social media and other online services providing access to publications” is an issue which “must be addressed.”

It’s strange because we thought that providing access was something that websites are in favour of. And the Commission presumably agrees — in fact they state in their intro that “allowing for wider online access” across the EU is one of their three main goals.

The stakes are pretty high here: let’s recap briefly why the link tax is such a terrible idea:

More worrying still is the Commission’s indication that user-generated content sites — such as social media platforms — will be caught in the link tax dragnet. The Commission had not mentioned this before (and, remember, today’s document was a leak so presumably it was trying to keep this incendiary proposal secret until the last minute). As copyright rapporteur and German MEP Julia Reda suggested only weeks ago, it looks as if the Commission is determined to put forward a “broader, badder version” of this already terrible idea.

What’s worse is the Commission is trying to play word games to pretend it’s proposal does not amount to a link tax: instead they’re calling it “neighbouring rights”, “ancillary copyright”, “publishers’ right”, or a “value gap”. Basically they’re trying to swamp us in impenetrable bureaucrat-speak to hide the profound negative impacts the link tax will have on Internet users.

That’s why we asked you to share our gif reminding them that a rebranding of the link tax, is still the same flawed idea.

As our friends at Communia so perfectly put it, it’s clear that the Commission isn’t changing its mind, it just wants us to change our words:

EU Commission: we will create new ancillary #copyright for news publishers, but please stop calling it a #linktaxhttps://t.co/b8iz6TWSAr

It’s particularly shocking that this unelected body refuses to follow its own best practices and listen to public input before writing the law. In response to the Commission’s initial consultation on platforms a total of 10,000 of you responded, followed by a further 37,000 to the second consultation on ancillary rights — asking it not to proceed with the plan for a link tax.

However the European Commission has still not released the analysis of the comments to the consultation on ancillary copyright and freedom of panorama. Instead it is pressing ahead with this disastrous idea without even acknowledging the responses it received. This shows a remarkable disregard for public input and evidence-based policy making.

In addition we can point to Copyright for Creativity, which also helped people respond to the full consultation:

C4C for example knows that looking at the 2819 responses we collected, there was a resounding NO to ancillary copyright and an equally strong YES to freedom of panorama.

We know that the link tax won’t work in practice; those who have had the experience of it have spoken out against, including the Spanish Publishers Association AEEPP and German ISP collective, ECO. Furthermore, the Commission concedes in this leak that both the German and Spanish version of this law have failed in practice (p146), but that it somehow expects it to turn out differently this time.

As before the link tax will lead to search engines and aggregators collapsing, unable to pay new fees, lost links, trouble accessing content, and a loss of traffic and revenue for publishers.

The simple fact is that censoring links breaks the Internet – without links to route us around the web, the content we want to see would be locked away.

Sadly, the European Commission has allowed itself to be captured by the publishing lobby to the point that the potential for real important reform to #fixcopyright has been put aside in favour of serving the selfish interests of a few large media companies and recklessly pushing forward with the link tax at the EU level.

We’ve got a plan to make sure the Commission won’t be successful in their efforts to implement a link tax – but we need you to help us by continuing to speak out on this issue at www.savethelink.org