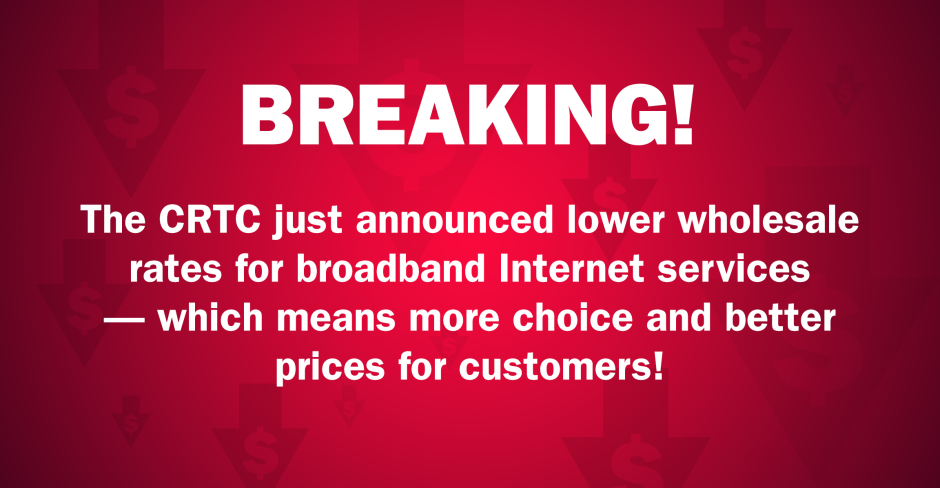 By lowering wholesale broadband Internet rates, the CRTC is lowering barriers for small Internet providers to enter the market!

Today the Canadian Radio-television and Telecommunications Commission (CRTC) released a landmark decision to make the Internet more affordable in Canada by lowering wholesale broadband rates that small internet service providers (ISPs) pay for access to the network of large ISPs, like Bell, Telus or Shaw.

This decision will benefit Internet users across Canada. It will reduce the barriers small ISPs face when entering the market and enable more affordable options for customers. Many independent providers will even see a refund for having overpaid for the past three years, as the rates have been set to take effect retroactively to 2016, when the CRTC last set the rates on an interim basis.

It’s no secret that Canadians have been paying too much for their Internet for way too long, and today’s decision is proof that Big Telecom has been holding the market hostage, gouging smaller providers for years. But these new rates bring us one step closer to seeing more affordable Internet available through a wider choice of providers.

What is still missing from this decision is regulation of fibre wholesale rates. Internet users have been waiting to gain access to Canada’s fibre network via independent providers since the CRTCs 2015 decision, but hopefully this paves the way for more affordable rates to come.

At this point, many of you will be asking yourself, what are these wholesale rates that Rodrigo is talking about? Don’t worry, I was also asking myself that question when I first joined the OpenMedia team.

The wholesale rates are the cost that small independent ISPs have to pay the Big Three and other large ISPs to get access to their Internet network. These small ISPs buy Internet bandwidth in bulk and resell it to their customers.

To ensure these small independent ISPs are profitable, the CRTC sets the wholesale rates at a level it deems fair and is still profitable for all parties.

To make sure they’re still making a profit, the smaller providers need those rates to be low enough that they can afford to pay their bills, and still have rates that are competitive with the incumbents. As you can imagine, before the CRTC started regulating these wholesale prices, incumbents would charge smaller companies unreasonable rates to keep any competitors from entering the market.

In 2016, the CRTC set interim wholesale rates to allow independent ISPs to compete while the CRTC did a bigger study of what rates would be fair for the industry. Today’s decision set the final wholesale rates, which are considerably lower than the 2016 interim decision.

This will allow more independent ISPs to enter the market and offer lower prices for customers. As a result, this will also force large ISPs to lower their own prices so they can compete with the new kids on the block!

Does this decision apply to Fibre?

Unfortunately, this decision does not apply to fibre Internet. It only applies to cable and DSL connections.

While the CRTC opened up the incumbent’s fibre network to competitors back in 2015, they have yet to set rates for this networks. This means that independent ISPs still don’t have access to the fibre networks set by Bell, Telus, Shaw and other large ISPs.

For now, most Internet users will have to wait until these rates are set before we start seeing fibre prices go down.

What about my cell phone data plans? Will those go down?

Just like fibre, this decision does not apply to wireless data plans. This means that for now, the Big Three will continue to have oligopolistic control over wireless communications.

That said, over the past few months the CRTC has sent some signals it plans to open up the market to Mobile Virtual Network Operators (MVNOs). These are companies that buy wholesale wireless spectrum from the Big Three and other large cell phone providers in the same way that independent ISPs lease broadband access.

Other developed countries have shown that opening up the markets to MVNOs helps to dramatically reduce cell phone prices. But for now, Canadian cell phone providers are not required to sell wholesale access to their networks, which means they can keep tight control over the market.

We are hoping that in the coming months, the CRTC will force the Big Three to open up their network to smaller cell phone providers, which could lead to a wave of new competitors entering the Canadians cell phone market and lowering prices.