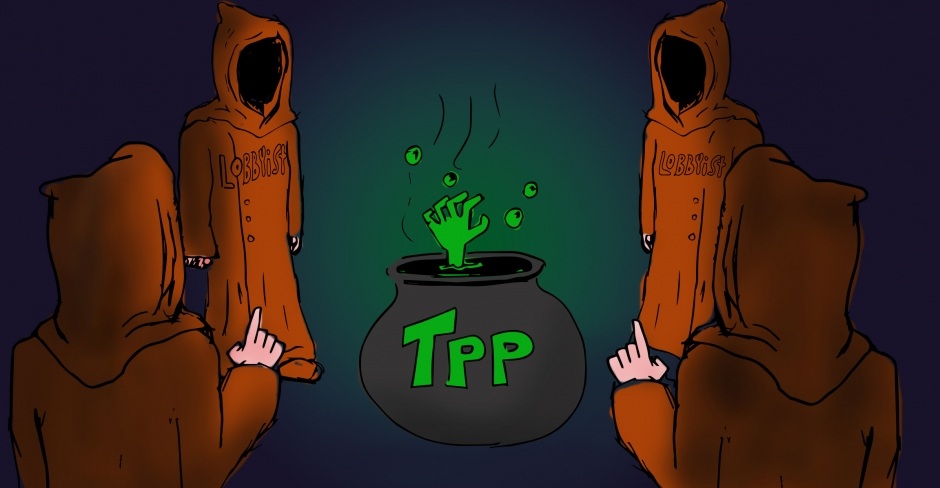 Back from the grave — Secret TPP talks to resume in Toronto

High level negotiators from 11 countries are meeting in Toronto in an attempt to resuscitate the controversial Trans Pacific Partnership. The meetings will take place behind closed doors at an undisclosed location on May 2 and 3. The proposed mega-trade deal appeared to be dead after public pressure prompted the U.S. to withdraw from the pact.

The TPP sparked strong public opposition in all 12 countries. In part the criticism of the deal which could have covered 40% of the world's trade was that it was negotiated entirely in secret and without public input. But as details of the deal began to leak out, opinion polls in most of the participating countries tracked growing public opposition.

The renewed talks have sparked protests from the Trade Justice Network and other civil society groups who warn that because the TPP was created without citizen input, it cannot be the basis for Canada’s future trade relationships with Asia-Pacific nations. The groups say it’s absurd and undemocratic for the federal government to host secret talks at a secret location on a deal that will dramatically impact the lives of Canadians.

Here's what some members of these groups are saying about this attempt to bring the TPP back from the grave:

“The TPP is only marginally about trade. It is about harmonizing standards and regulations across countries and strengthening the rights of corporations at the expense of citizens, workers, the public at large, and the environment. The costs of ratifying the TPP far outweigh any small benefit that may be gained. We urge the Trudeau government to stand up for Canadians and against the Trans-Pacific Partnership,” – Larry Brown, Co-Chair of the Trade Justice Network and President of the National Union of Public and General Employees.

“Deals like the TPP never truly die. Their destructive nature – killing jobs and the environment – lives on in other forms. Even without the U.S., other countries are trying to revive the dubious legacy of the TPP. It’s time they got the message: People are tired of these agreements, and we must do better.” – Maude Barlow, National Chairperson of the Council of Canadians.

“TPP was a bad deal then, and it’s a bad deal now. We were told we had to be in the TPP because the U.S. was in it. Now, the U.S. is out. Why would we revive a trade deal that was so bad for Canadian workers and communities? The federal government has not even completed its review of the last TPP deal. Canadians have said they do not want the TPP. The government does not have a mandate to bring this bad deal back to life.” – Unifor National President Jerry Dias.

“The TPP is an unfair and undemocratic deal that was negotiated behind closed doors without any meaningful public participation. Such a flawed and unpopular deal cannot be the basis for Canada’s future trade relationships. Instead of hosting secret talks to resurrect the TPP behind closed doors, the government needs to go back to the drawing board and ensure any future trade deal is shaped by citizens every step of the way.” – David Christopher, OpenMedia.

"Trump's election should have triggered alarm bells in Ottawa about the dangers of pursuing trade agreements that promote corporate interests at the expense of the public's. The Leadnow community is shocked that the government is discussing how to resuscitate the TPP - a dangerous, costly, and lopsided agreement that the public widely rejects,”  – Brittany Smith, campaigner at Leadnow.

The recently published Let’s Talk TPPreport, crowdsourced from nearly 28,000 Canadians, found that the most common reason for opposing the TPP was the failure of the federal government to consult with the public during TPP negotiations. Canadians also highlighted concerns around digital rights, corporate overreach, democratic accountability, healthcare and public services, the environment, labour issues, and the economy as reasons they opposed the deal.

The TPP has also been condemned by respected citizens groups including the Sierra Club, Doctors Without Borders, the Canadian Labour Congress, OpenMedia and even Canadian business tycoon Jim Balsillie and the Canadian head of the Ford Motor Company.

Canadians can tell the government to pull out of any future TPP talks at https://act.leadnow.ca/kill-the-zombie/ and can send a copy of the Let’s Talk TPP report to their MP at LetsTalkTPP.ca