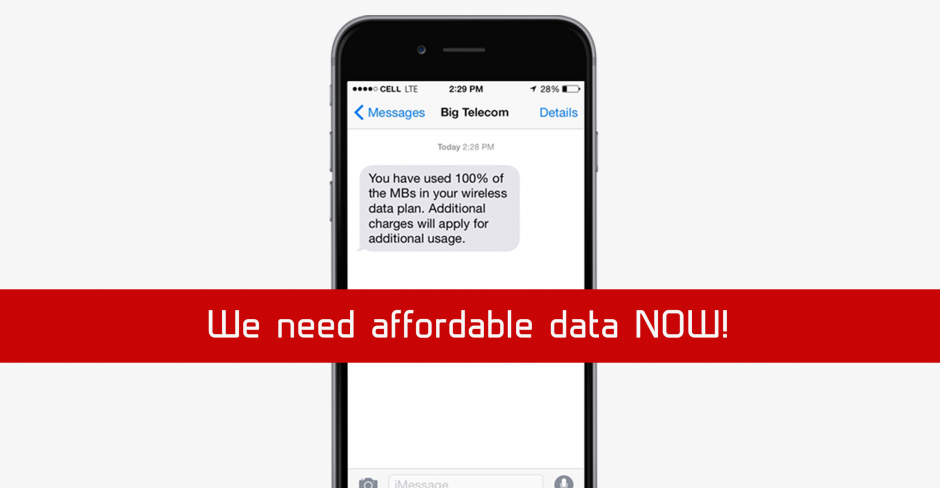 Affordable data: 8,015 of your comments on the public record!

You pay too much for your data plan, and now the Canadian Radio-television and Telecommunications Commission (CRTC) can't deny that.

Yesterday, OpenMedia submitted more than 8,015 of your stories telling the CRTC how much you pay for data each month, if you're forced to pay high data overage fees, and what you think a fair price for data is.

It's essential the CRTC hears from actual cell phone users. When the CRTC asked Canada's mobile providers what a fair price was, Rogers, Bell, and Telus suggested an "affordable data plan" of 500MB for $30 a month (with no talk or text included).

Yet, Rogers just quietly announced a flash-in-the-pan deal only for new customers in Manitoba for 30GB for $80 (plus Canada-wide calling).

Let’s do the math: The so-called “affordable plan” is $60 per gigabyte, yet Rogers has just shown they are able to go as low as $2.60 per gigabyte? That’s 23 times less.

And our mobile data usage just keeps growing. The latest stats on Canada’s mobile data habits suggest we use an average of 1.2GB of data a month — up 25 per cent from the year before. And we pay some of the highest cell phone prices in the world.

That's why your comments matter — every time you speak up, it puts pressure on the CRTC to protect us all from being price gouged every month.

Read our full submission here, or below.